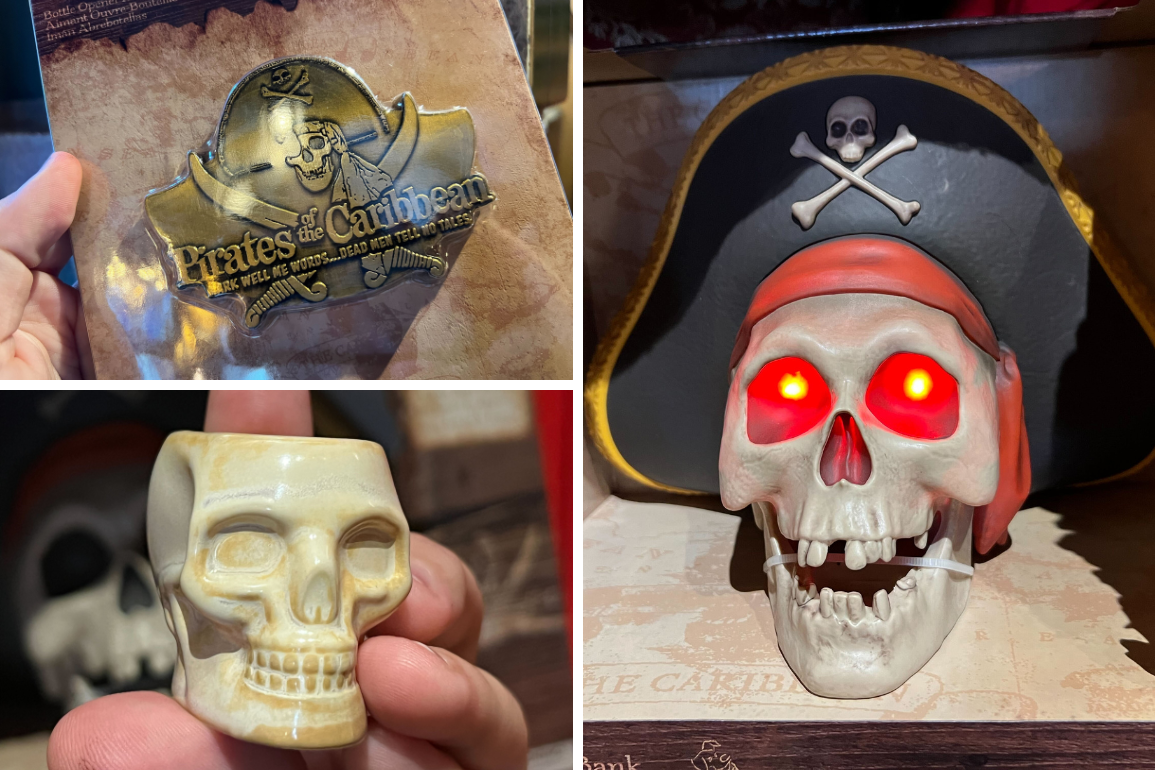 If ye be lookin’ for a place to keep your treasure, Pieces of Eight at Disneyland has a Pirates of the Caribbean skull bank, among other new arrivals.

The skull-shaped interactive bank is wearing a pirate hat.

When you press the small skull on the hat, the eyes light up and it says, “Mark well me words, mateys… dead men tell no tales.”

See the bank in action in our video below.

The magnet features the Pirates of the Caribbean logo and “Mark well me words… dead men tell no tales.”

The magnet is three-dimensional and the hat serves as a bottle opener.

This “toothpick holder” is shaped like a small skull.

It features a retro Pirates of the Caribbean logo.

If you don’t need a place to store toothpicks, you could use the skull for small servings of beverages.

Carry your loot in style with a black sling bag featuring the Pirates of the Caribbean logo.

Three patches are on the bag featuring a ship wheel, the attraction logo, and a pirate resembling the Auctioneer.

The ride’s text logo is imposed over a set of crossed swords on the front zipper pocket.

The strap is red and reads, “This place is off the hook!”

A long sleeved shirt features the retro Pirates of the Caribbean logo with a skull, crossed swords, and a ribbon reading “Dead men tell no tales.”

It also says “1973,” which notably was the opening year for the attraction at Magic Kingdom, not Disneyland.

Show off your swashbuckling style in gray shorts with an elastic waist and red tie.

The shorts feature sketch-style illustrations of scenes from the attraction.

The logo, the jail scene, Redd, and the well scene are among the featured images.

For more new Pirates of the Caribbean merchandise, check out the following: