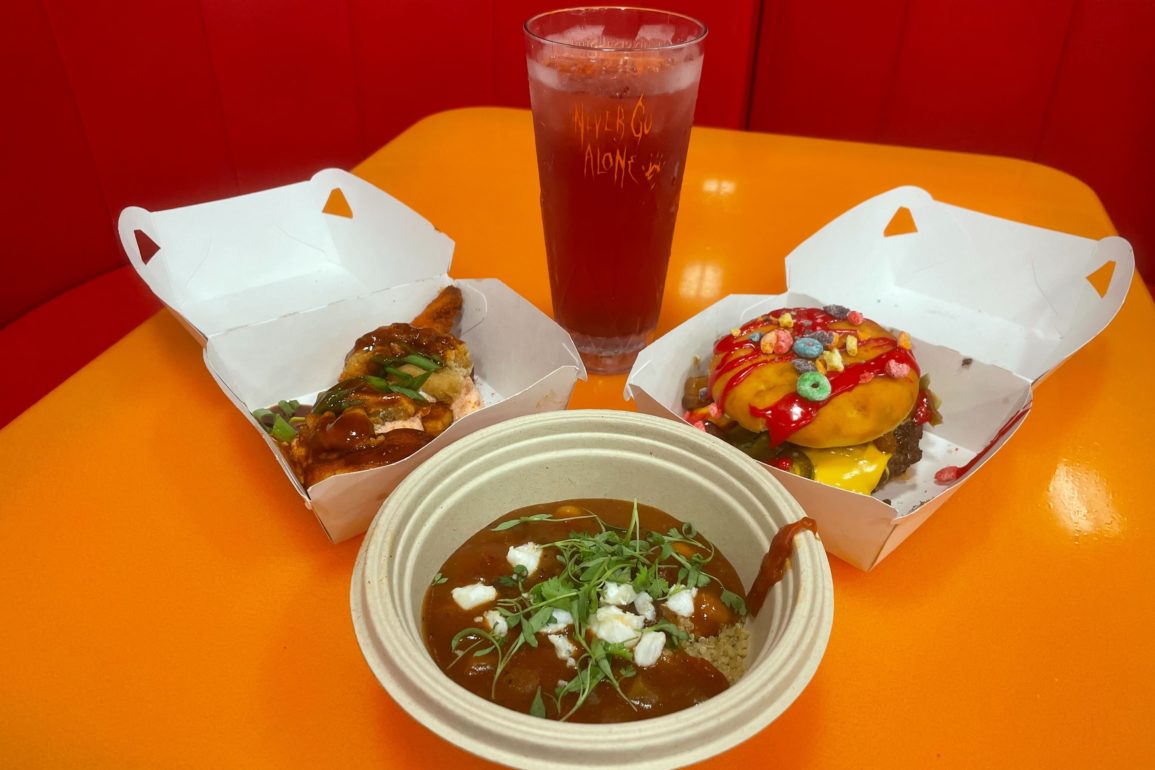 While he may not have his own house or Scare Zone, Chucky is still featured around the park at Halloween Horror Nights 31, taking place in Universal Studios Florida. Returning from last year is the popular Chucky Photo-Op, and new this year is a themed food booth, and we’re ready to dive into these dishes.

Menu for the “Chucky” Booth at Halloween Horror Nights 31

With jalapeños, fruity cereal, and a doughnut bun, it sounds like you’ll have nightmares about it, but at Halloween Horror Nights, is that really a bad thing?

The way the cheese sauce and red icing mix together, it almost looks like ketchup, but you’re in for a surprise when you bite into it. That icing is incredibly sweet. It almost tastes like cinnamon roll icing with liquid cheese.

This is a knife and fork burger, but once you get a little bit of each ingredient together, it actually isn’t too bad. With just a little less icing, we might have eaten the entire thing, and possibly regretted it.

The burger and toppings were delicious, and the donut bun was actually the perfect way to complete it.

If you enjoyed last year’s Jack’d Donut Slider, this is a more extreme version worth trying. It won’t be for everyone, but we still recommend it.

This basically consists of a thin layer of chili on top of a bowl of quinoa. We really wish there had been more chili and less quinoa to make it more balanced.

The chili was spicy, delicious, and had a lot of heat and flavor to it. It paired really well with the quinoa.

Overall, this is a solid option.

Wanna play? Hell no. Stay away from us with this thing. This monstrosity is only for the brave.

There’s a large, misshapen beignet at the bottom of the box covered with a mess of pimento cheese and scallions. Somewhere lurking in this photo is an awful piece of chicken.

If you liked the Nashville Hot Chicken Mac and Cheese from Mardi Gras, they’ve taken that sauce and turned up the heat. This was eye-watering hot, and we ate the previous mac and cheese pretty frequently. There was just nothing underneath worthy of this sauce.

The chicken was really weird and fatty, which could have just been bad luck, but everything else was just disappointing. This was definitely a trick and not a treat.

Both the burger and the beignet were served in boxes promoting the upcoming season of the Syfy show, which premieres on October 5.

To get an idea of this drink, think of a Shirley Temple with alcohol. It wasn’t our favorite drink of the evening, but it was much better than some of the other drinks we’ve tried this year. It’s simple and not too sweet. We would order it again.

Location of the “Chucky” Booth at Halloween Horror Nights 31

Are you brave enough to take on Chucky and try any of these items? If you’re ready to take on the challenge, head over to the entrance of Springfield to find this food booth.