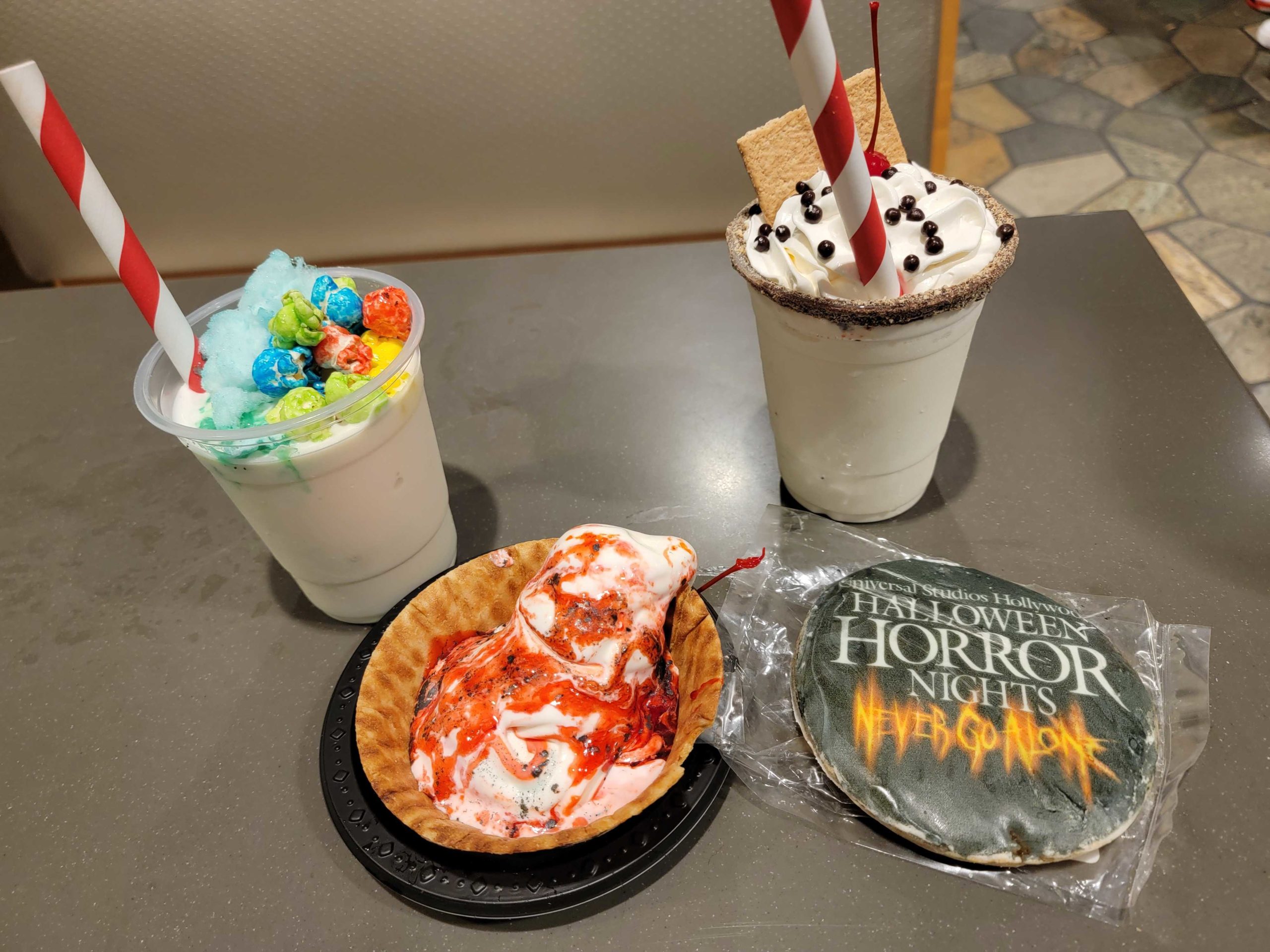 Warn the authorities and crank up The Dickies! The Killer Klowns from Outer Space have invaded Halloween Horror Nights 2022, and they’ve brought a variety of twisted treats at Jojo’s Ice Cream!

To see our video review of this restaurant and more Halloween Horror Nights foods, check out the video below. And keep scrolling for more pictures and our full review.

The stand, located on the Lower Lot, has overtaken Studio Scoop for the season and is open to guests during the day as well as through Halloween Horror Nights.

Of course, we managed to put our fears of becoming an intergalactic snack on hold just long enough to try some of the new options!

This was the best one on the menu, and even this wasn’t fantastic. The strawberry swirl soft serve is just vanilla with some strawberry syrup laced throughout, and then topped with more strawberry sauce. It was fine as far as a cup of soft serve goes, but this was definitely not the most engaging sundae we’ve ever had in either flavor or presentation.

Otherwise, for the Halloween Horror Nights specials, this one was at least the best of the bunch because you can’t be too upset while eating an ice cream cone.

This one was interesting, in that the popcorn coating did start to dissolve into the shake, but not really worth much more than a plain vanilla shake.

The slight bit of popcorn flavor that passes into the mundane, lackluster vanilla shake is a novelty, but not all that good.

This is something where we would walk away from this telling our friends that we had a popcorn-flavored shake not because we enjoyed it, but just because of the weirdness of the idea. Even with a hint of popcorn in the shake, it was overall rather plain.

This was the one we had the highest hopes for, as well as the one that dashed those hopes the hardest. The Acid Pie is a direct tie-in to the “Killer Klowns from Outer Space” film and it was also the only genuinely good thing to come out of the Killer BBQ from Outer Space food tent right across the street.

But this shake was just a plain vanilla shake with chocolate pearls on top and a single graham cracker shoved in. It isn’t even a good vanilla shake. It was watery and skimping on the vanilla flavor, opting instead for a sweetened milk flavor that was too runny from the outset. It was like a shake one would get from a fast food restaurant, but not one of the better chains.

The chocolate pearls, listed on the menu as green pearls, weren’t even green. Not that it matters because whether green or brown, a pinch of chocolate pearls isn’t saving this underwhelming vanilla shake.

This is just a plain sugar cookie, as could be expected. It is Instagrammable, with the logo of the event (or optionally a Sugar Skull variant) emblazoned on top in printed food coloring and frosting. The frosting does help bring some added sweetness to the cookie, but overall it’s rather plain.

The theme park sugar cookie is a known commodity – not great, not terrible. It just does its job as a cookie and doesn’t wow anyone. This cookie is no exception.

Looking for something savory to go with all these sweets? Check our our review of Pizza Fries’ west coast debut at The Weeknd After Hours Nightmare Bar!