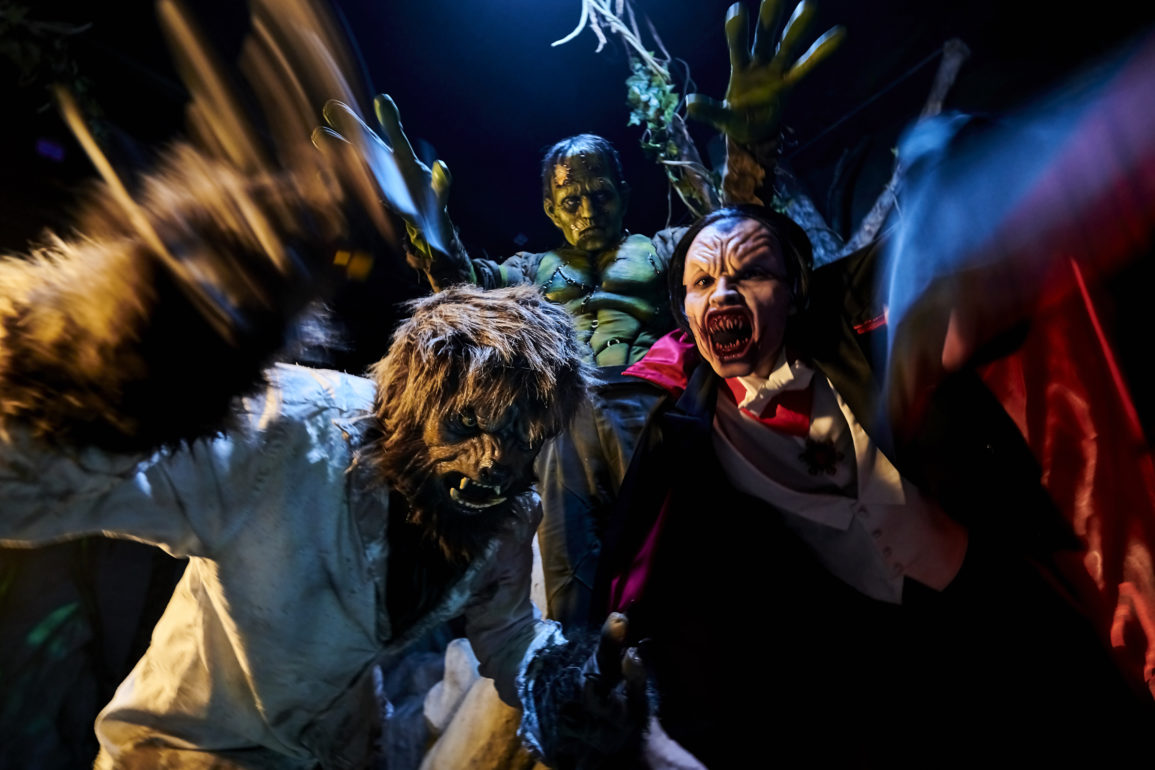 You’re in a cemetery in the dark, running away from an onslaught of monsters… Werewolves, Frankenstein, Dracula… Can you survive the hell you’re about to enter?

Based on the wildly popular Universal Monsters house from Halloween Horror Nights 29 at Universal Orlando Resort, this house is brand-new to Universal Studios Japan, and is among the most-anticipated additions to the park’s Halloween Horror Nights slate, seeing as the Monsters are beloved at the park. To this day, “Beetlejuice’s Rock ‘n’ Roll Graveyard Revue” plays as the “Universal Monsters Live Rock ‘n’ Roll Show” unchanged since 2001 to full audiences of a fervent fanbase, making this a prime choice.

Everything about this house was new to me, since I’ve never really experienced Halloween Horror Nights before at any park. I went through this experience twice, and both times found myself catching new details in set design throughout the house.

Guests are guided into the maze and split into groups, typically of five or six. The lead guest is given a lantern by Crew Members to shine their way through. You enter through a graveyard and are warned to turn back and leave. Evil creatures first appear in the graveyard before you encounter the werewolf bursting out. A monster hunter then saves you before guiding you inside a building. Little do you know, it’s the home of Dracula and his vampires. Even the lantern given to the lead guest turns red with blood. Winding hallways lead you on multiple encounters with vampires before finally reaching the world of Egypt, where mummies attack. Last but not least, we enter the laboratory of Doctor Frankenstein, where his monster and the Bride come after you. Through one last trip in the graveyard to escape, we meet each of the monsters one more time before reaching the safety of the exit.

Universal Studios Japan typically does not allow recording in their houses, but they provided some footage of the experience inside.

Much of the attraction’s audio cues were in English, with incredible set design throughout creating a realistic feeling which left me impressed. In spite of my cowardice, I still was incredibly entertained through the wonderfully talented scare actors, each with detailed costuming and incredible makeup and prosthetics to boot, and the incredible set design which brought me into the worlds of these classic monsters.

All in all, Universal Monsters: Legends of Fear is a winner for me. Not that I’ll do it again, I’ll leave that to those far more brave than I.

Universal Monsters: Legends of Fear is located within Stage 22 in Hollywood, between Space Fantasy: The Ride and Cinema 4-D at Universal Studios Japan.

Guests wishing to experience the house may be required to obtain a timed entry ticket, which can be found in the Universal Studios Japan app or near the exit to Terminator 2: 3-D in New York. The house is open all day, including during Halloween Horror Nights.