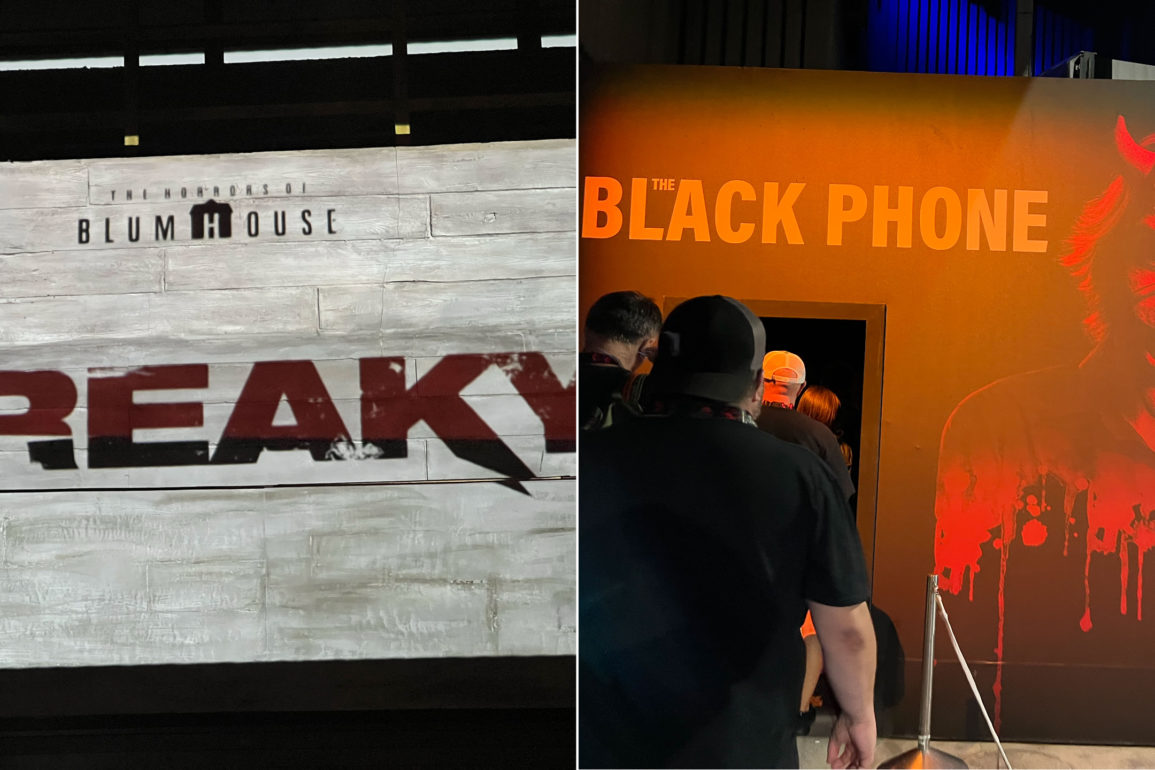 Step into “The Black Phone” and “Freaky” in The Horrors of Blumhouse at Halloween Horror Nights 31.

The official description reads, “Step inside a new double-feature of Blumhouse horror. Your scream squad will find yourselves trapped between a frantic teen and the ruthless serial killer she’s swapped bodies with in ‘Freaky.’ Then, you’ll try to make a desperate escape from the dark basement of The Grabber before you become his latest victim in the terrifying ‘The Black Phone.'”

The first half of the house is “Freaky,” while “The Black Phone” is the second half.

Both halves of the house follow their respective movie plots pretty closely. In the “Freaky” section, a high school girl switches bodies (a la “Freaky Friday”) with the local serial killer known as The Butcher, she has less than 24 hours to switch back before the change becomes permanent. The Butcher meanwhile is on the loose as her with an ancient dagger known as El Dolo, with which she must stab The Butcher to make the switch happen again.

The second half follows “The Black Phone”. A 13 year old is being held hostage in the basement of a deranged masked serial killer. When a disconnected phone starts ringing, he finds he can communicate with the killer’s previous victims, who are determined to save him from meeting the same fate.

“Forced synergy” might be the best way to describe this house. The scares are pretty flat, and one is even ruined by the audio cues within the house. It’s all formulaic, following the plot pretty closely for both films and thus lacking in originality. We felt like A&D’s heart wasn’t really in this and their hands were tied, with the only real gimmick being it’s two houses in one. You leave “Freaky” to enter “The Black Phone” separately.

All in all, probably best to skip this one if you’ve got other priorities, maybe come back only if you have time to kill or you really love these films.

Location of The Horrors of Blumhouse

The Horrors of Blumhouse is in the queue for Fast & Furious: Supercharged.

Next
REVIEW: Autumn is Here with Octoberfest-Inspired Burger from Galactic Grill at Disneyland