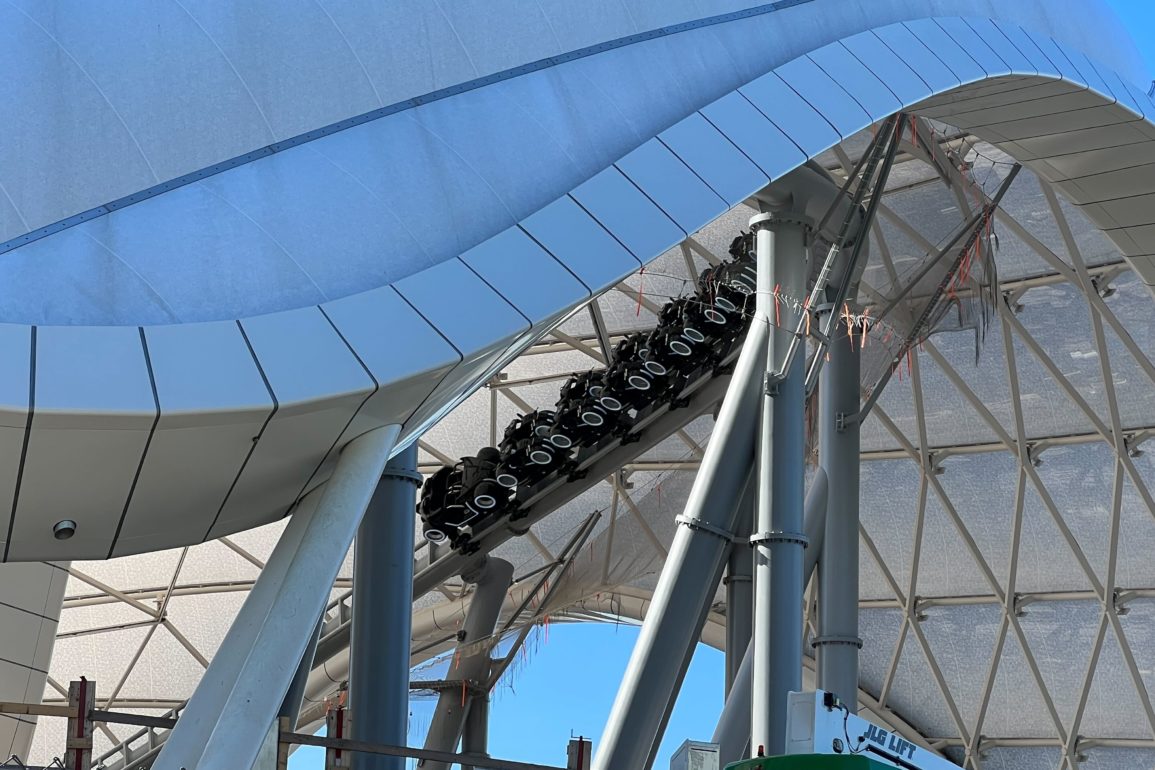 TRON Lightcycle / Run roller coaster trains have been testing more and more frequently at Magic Kingdom. Today, we saw the trains being launched at approximately 30-second intervals. Every seventh train was accompanied by sound effects.

You can hear the audio in our Twitter video below.

The sound effects are subtle and just add some extra techy swooshes to the trains.

The trains have also been tested at night with the canopy fully illuminated and their wheel lights on.

Several scissor-lifts were employed this morning as crew members secured pieces of the small entrance canopy.

The trains launch from beneath the entrance walkway.

Sparkling pavement was recently added at the start of the elevated walkway.

There are several concrete walls and planters carving out the landscape in front of the new coaster.

Rebar on the ground outlines where more pavement will be installed.

Permanent railings have been added to a section of the elevated walkway.

The railings, like much of the coaster’s exterior, are white.

A sidewalk is under construction directly under the PeopleMover track, between TRON Lightcycle / Run and Tomorrowland Light & Power Co.

Temporary wood railings outline the sidewalk as it is under construction.

We could see a giant grey gear sitting at the back of the construction site. This was removed from the front of Tomorrowland Light & Power Co. last month. Gear theming has mostly been removed from Tomorrowland, but this prop’s continued presence a month after its removal could mean it will return to the store.

More of the Walt Disney World Railroad train tracks have been reassembled nearby.

The railroad remains closed due to the construction of TRON Lightcycle / Run.

Tomorrowland Light & Power Co., a.k.a. the Space Mountain gift shop, is also closed. Crews have been working on the exterior for months now, but the interior is also getting an update.

A new short overhang has been constructed around the store.

Crew members on scaffolding seemed to be welding this morning.

Decorative towers were the first thing to go from the store’s exterior, likely to make more space as guests will walk this way to reach TRON Lightcycle / Run.

Years ago, the sidewalk led guests on a back route to Storybook Circus.

There is no announced opening date for TRON Lightcycle / Run or reopening dates for Tomorrowland Light & Power Co. and Walt Disney World Railroad.