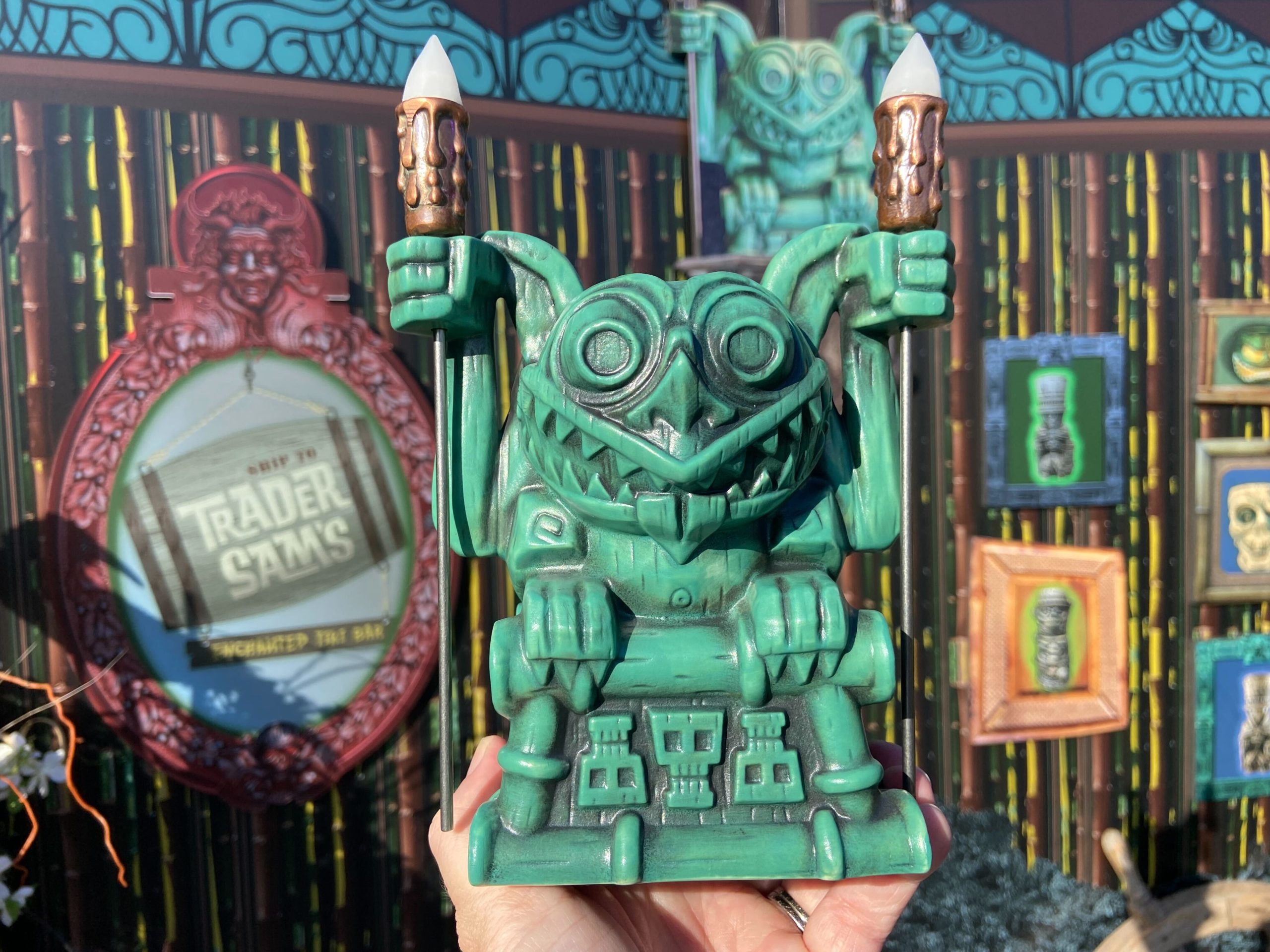 A new Halloween tiki mug is available outside Trader Sam’s Enchanted Tiki Bar at Disneyland Hotel today. This is the second edition of the Haunted Mansion gargoyle tiki mug. The first edition, which was a reddish brown, was released in September 2021.

To pick up your own tiki mug, you must mobile order it through the Disneyland App. One mug is $85 plus tax and it does not include a drink.

There is a table with water, so you can fill your mug if you really want. But there are also plastic cups available.

There are several tables manned by Cast Members checking IDs with mug orders.

Cardboard cutouts of the mugs are on display.

There are other empty tables just for guests to unpack and check their mugs.

They come packed in a cardboard box and bag.

Some assembly is required. The torches held by the gargoyles need to be installed.

Here’s our tiki mug before we installed the torches.

The torches come in a zip-lock bag with instructions on how to install them.

The torches have bronze sculpted ends that resemble candles with dripping wax.

The candles are on long metal poles that slide into the gargoyle’s hands.

These white caps go into the bronze candles and light up like flames (after removing the plastic tab).

The nearby stage was set up for photo-ops with more cardboard cutouts of the gargoyles, and a Haunted Mansion-inspired backdrop.

The framed portraits on the backdrop are of previous tiki mugs, including the two editions of the Haunted Mansion Hatbox Ghost mug, one of the zombie head mugs (the 5th edition was released last month), and a Jack Skellington mug.

The second edition of the gargoyle mug is a teal-green color. Three skulls are sculpted into the base.

It has two arms up for holding the torches, and two legs gripping the base.

The base resembles bamboo.

The mug’s opening is on the gargoyle’s hunched back.

Watch our full POV of the Haunted Mansion at Disneyland Park:

‘For the First Time in Forever: A Frozen Sing-Along Celebration’ Performance Canceled Due to Ceiling Leak in Disney’s Hollywood Studios