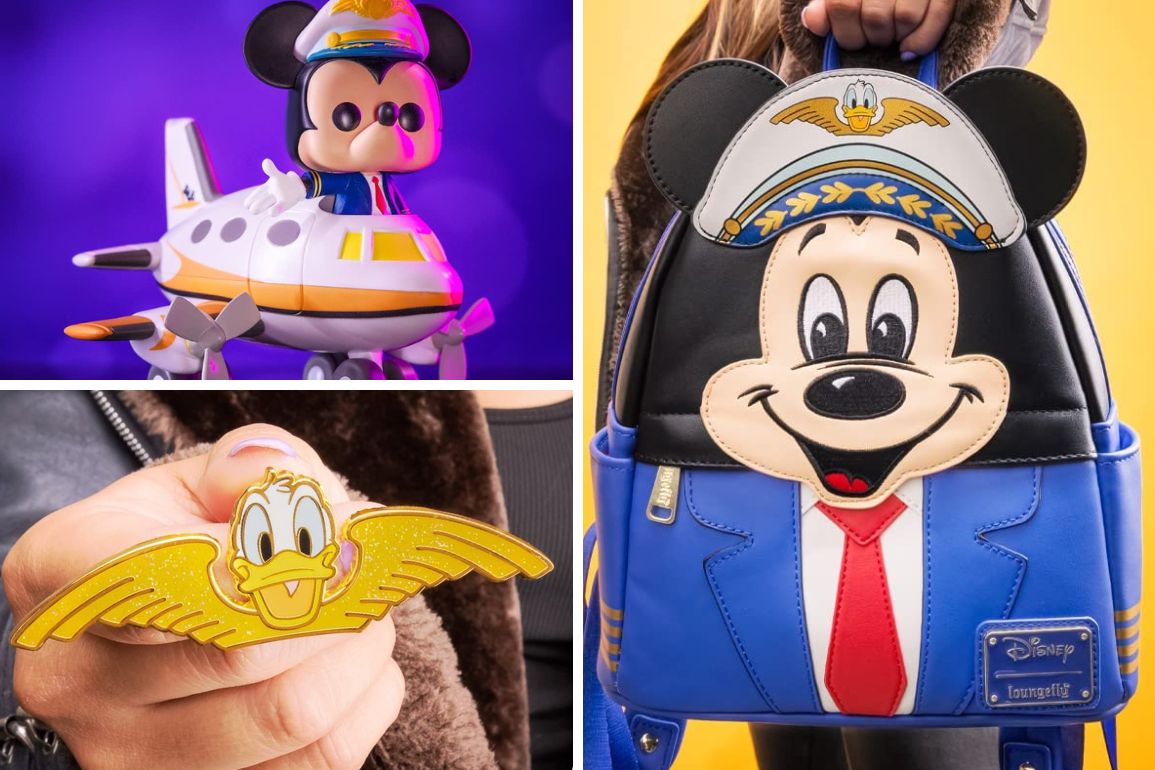 While the D23 Expo wrapped up last month with a flurry of announcements, the multi-day convention also includes the introduction of a lot of new and unique merchandise. Luckily for Disney fans, some of that merchandise becomes available to the public after the expo, and the Mickey Mouse One: Walt’s Plane collection has done just that.

First up is this Mickey Mouse One pilot Mickey plush from Just Play. Mickey measures up at 15″ tall and is outfitted in his finest pilot’s uniform with lots of gold and other embroidered details. Up top, Mickey wears a Donald wings captain’s cap and gives an enthusiastic salute.

One of the most unique items from the collection is this “Mickey in The Mouse” Funko Pop! with Mickey Mouse at command of the iconic plane. The figure shows the aircraft with its unmistakable livery, including Mickey Mouse on the tail.

If you’re a fan of Pilot Mickey from the plane figure above, then you’re in luck! Funko has given Mickey a standalone Mickey Mouse One “Pilot Mickey” Pop! figure. The Main Mouse is in his finest captain’s uniform and stands 3.82 inches (9.7 centimeters) tall.

Rounding out the Funko portion of the collection is this “Plane Crazy” Mickey & Minnie Pop! set. Featuring the unmistakable mouse couple, the vinyl figures are shown in black & white as they appeared in the 1928 Walt Disney cartoon “Plane Crazy”. Mickey is even holding a book called “How to Fly” just as he did in the film. This Funko Pop! set will be released on December 11, but is available now for preorder.

Not to be outdone, Loungefly has a few amazing entries into the collection. First up is this mini backpack, which features Mickey Mouse in his pilot’s uniform on the front, complete with captain’s cap that includes Donald wings! On the back is an illustration of Mickey, while the side has metallic uniform details and Disney stylized “D”. Finally, Loungefly doesn’t disappoint as the lining of the bag features a repeating Donald wings pattern.

Love the Donald wings that appear all over the Loungefly backpack? You’re in luck, because those Donald wings are available as a pin! The pin is made from gold-colored metal and filled with glittery enamel details.

It wouldn’t be a Loungefly collection without matching ears, and that’s no exception for the Mickey Mouse One collection. These black imitation-leather ears are fairly subtle, but the addition of a pilot’s hat is what really elevates them. The hat has stitching detail but, most importantly, includes the Donald wings emblem.

Will you be picking up any of this Mickey Mouse One collection from D23? Let us know in the comments below!

For other great Disney gift ideas, check out the new ‘The Imagineering Story’ book which releases in November and Ravensburger’s Space Mountain board game.