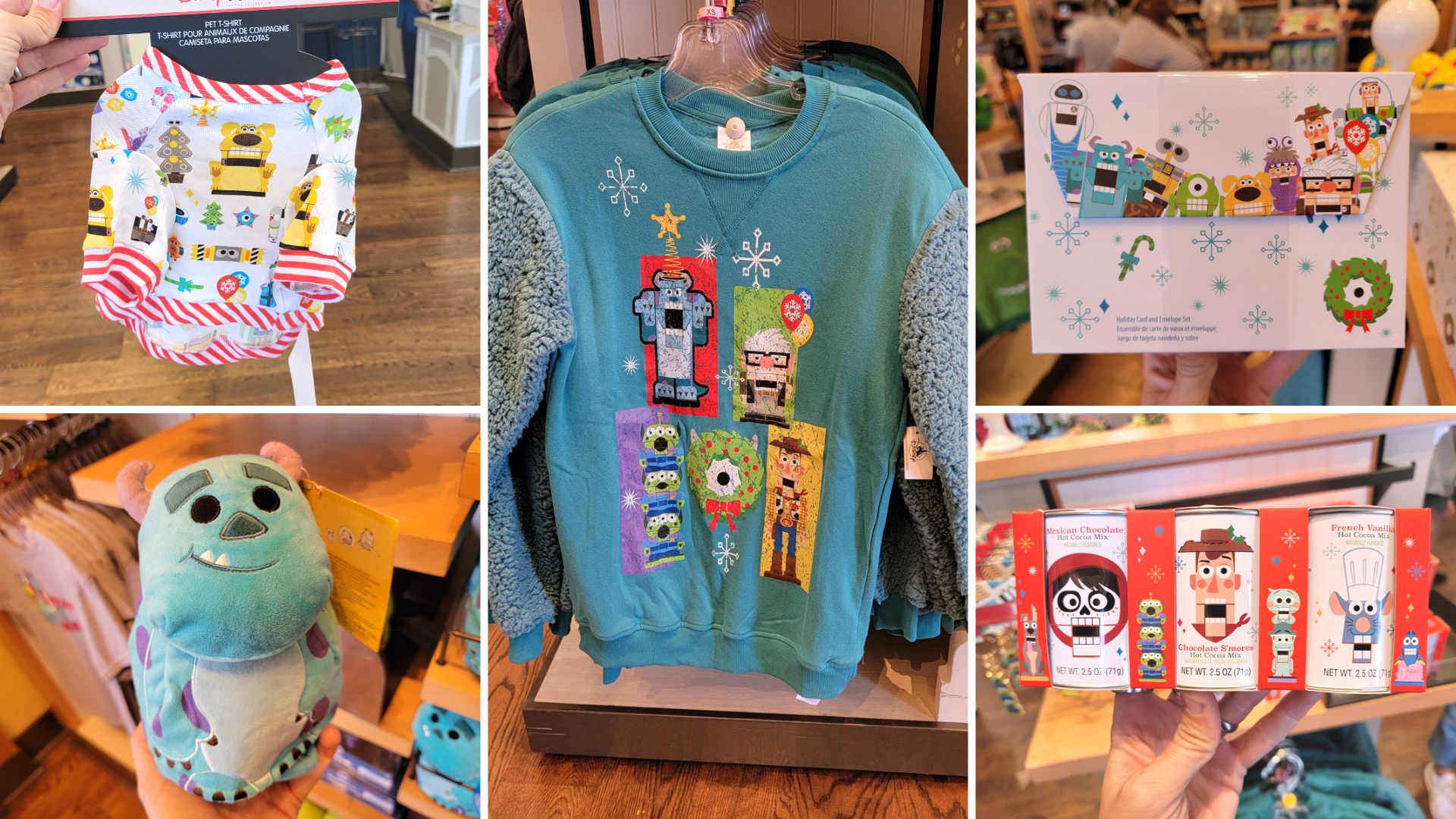 More Pixar holiday merchandise, including apparel (for humans and pets) and a nested “Monsters, Inc.” plush, has arrived at Disneyland Resort. Most of these new items can be found in Knick’s Knacks at Pixar Pier in Disney California Adventure.

This pullover hoodie is blue, with fuzzy sleeves. Nutcracker versions of Sulley, Carl from “Up,” the “Toy Story” aliens, and Woody are on the front around a Mike Wazowski wreath.

This has an identical design as the youth hoodie, just without the hood.

The backs of both the hoodie and sweatshirt are blank.

This shirt features Sulley, in a red jacket and scarf, holding up Mike, wrapped in tinsel and ornaments. It reads “I wrapped it myself.”

This cozy long-sleeved shirt is perfect for winter. It’s heather gray and covered in images of the nutcracker Pixar characters set against colorful blocks.

Some of the characters include WALL-E and Eve, Dug from “Up,” and Boo from “Monsters, Inc.”

The box is white and also covered in snowflakes, candy canes, and Pixar wreaths.

Images of the included note cards and envelopes are on the bottom.

There are 20 blank note cards and 20 envelopes. The four designs feature various nutcracker characters with puns like “Pawstively festive,” “Feeling joll-e,” and “Toy to the world.”

Woody is on the chocolate s’mores tin.

Nutrition information is on the back of each tin.

This shirt is white with red and white candy cane striped edges.

It’s covered in more nutcracker characters, as well as Pixar Christmas trees, candies, and decorations. Dug from “Up” is prominently featured.

These shirts come in different sizes, so make sure to have your pet’s measurements on hand.

The back of each bandana is red and white striped. Another bandana features nutcracker Buzz with a red bow, as well as Dug and WALL-E to the sides.

The third one has a more all-over pattern of nutcrackers, snowflakes, trees, and candies.

Finally, this nested plush is like the Matryoshka often associated with Christmas. The biggest plush is Sulley from “Monsters, Inc.”

Two plush are nested inside Sulley.

He has a velcro flap to keep them inside.

The next plush is Mike Wazowski.

The third tiny plush is Boo, wearing pink and purple.

We found this pillow in World of Disney at Downtown Disney District. It reads “Toy to the World” in bright colorful letters against a light blue background.

It features “Toy Story” inspired holiday items on this side, including Hamm the piggy bank as an ornament.

Buzz Lightyear’s spaceship is pictured in wrapping paper, and Bo Peep’s sheep are another ornament.

The pillow is rimmed with blue puffballs.

The other side of the pillow features nutcracker versions of Buzz, Dug, Sulley, and WALL-E.

A Pixar holiday Spirit Jersey and keychain set are also available at Disneyland Resort. Check out the Pixar ear headband pin sets, too.

Will you be celebrating the holidays at Disneyland Resort this year? Let us know in the comments.