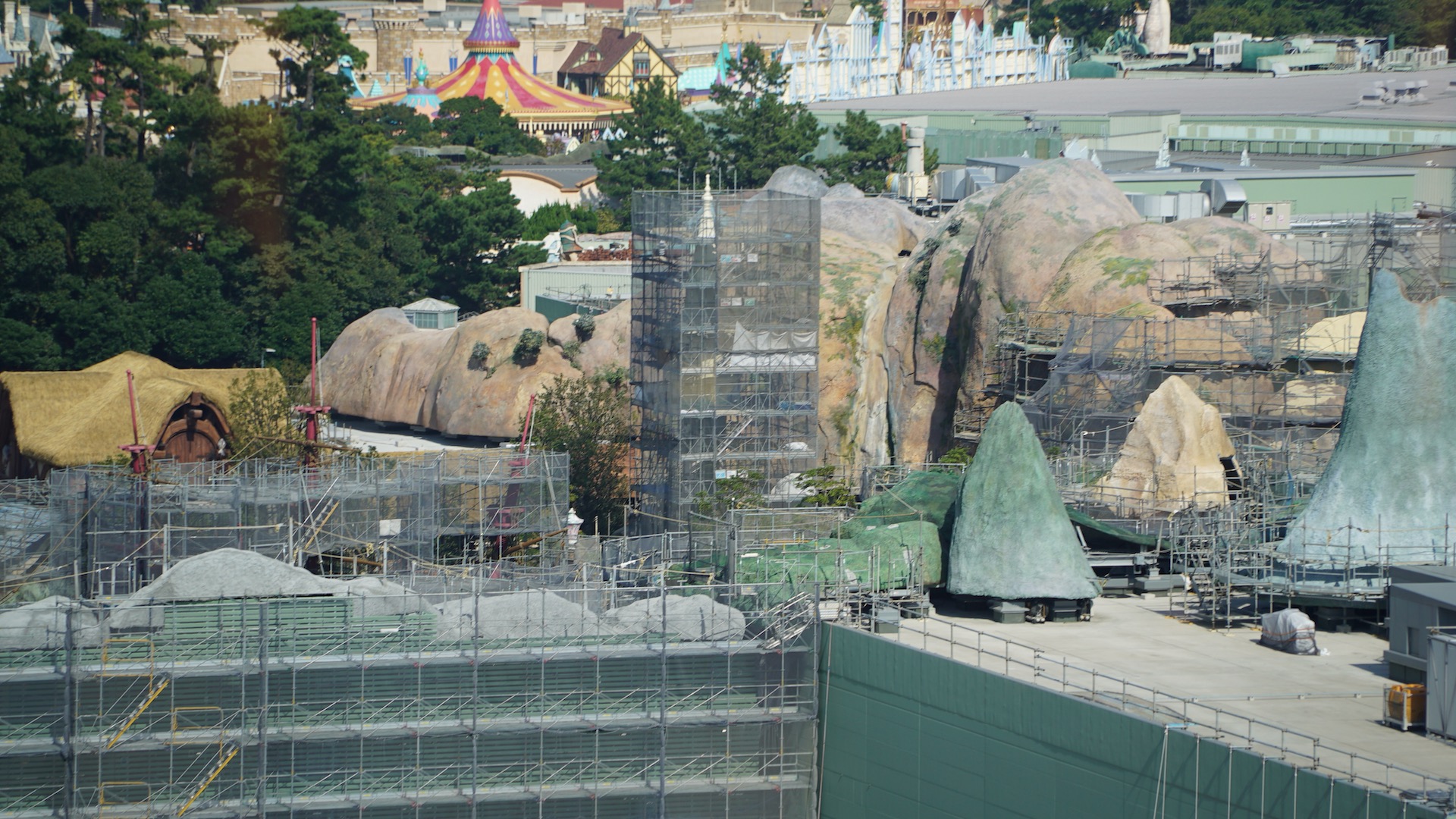 While construction does seem to be slowing a bit in Fantasy Springs at Tokyo DisneySea, the project is still coming along, and there’s been visible progress at the site! So let’s take a look at what’s happening.

There’s been little movement outside the hotel’s north-facing side, with most work likely taking place inside to get fittings installed.

Curtains are in place around every guest room, making it seem at least like interior work is already well underway.

Landscaping remains limited, and the soil looks fresh. It will probably still be some time before flowers and/or grass are installed.

Rockwork is nearly complete on the fountain set to be in place outside the hotel.

Also nearing completion is the porte-cochere dome outside the hotel’s main entrance. While the entire structure is still rather boxy, it’s nice to see some features getting love.

Scaffolds are down entirely around the walkway cover, which flanks the hotel’s main entrance.

A small structure is under construction next to Bayside Station, presumably an entrance for hotel guests to use when visiting Tokyo DisneySea. I wonder if guests at the surrounding resorts will be able to use this entrance after park open, like at the Hotel MiraCosta?

On the back side, much more of the scaffolds are coming down, and the ornate dome in what we presume is the hotel lobby is nearing completion. When it’s done, it will look just like a crown!

Work continues in the Peter Pan area of the land.

Dirt has been added to the berm structure behind the Pixie Hollow dark ride, we can only assume trees aren’t far behind to hide the Official Hotels from inside the park. A large purple plant has also been installed behind the ride. We can also see rockwork which will help break up pathways underway.

There’s little change on the Neverland mountains, the steel supports presumably to hold clouds are still jutting out from the tallest peaks, and only a few clouds have been installed.

Structures across from the Pixie Hollow dark ride are still coming into their own. It looks like a fake tree is under construction.

Scaffolds are coming down around the rocks which surround Rapunzel’s famous tower. Looks like the work is nearly done!

While no new scaffolds seem to have come down in the area otherwise, her tower is definitely nearing completion compared to our last visit.

A close look reveals painting is nearly complete, and we won’t see

A few more smaller structures are still under construction by The Snuggly Duckling, we can see a blue roof through the scaffolds.

Things seem to be wrapping up around the North Mountain. More scaffolds are down at its peak, and painting is just about complete.

This seems to be the area that still needs the most help, much of it is still only steel frames. With construction slowing down, hopefully, it isn’t a long wait before more work is done.

It seems painting on the North Mountain is being done in phases. With the upper section now complete, work can begin on the middle and lower areas to get them ready for guests.

If you look closely, one of the Arendelle buildings looks to be farther along than the rest of the Frozen area, with a brown roof very much visible under scaffolds.

Rockwork is well underway at the future entrance of the land. We’re so close to hearing rushing waterfalls and seeing thousands of guests streaming into this $2 billion expansion, and yet so far away. Keep watching WDWNT as we continue checking in on the construction here!