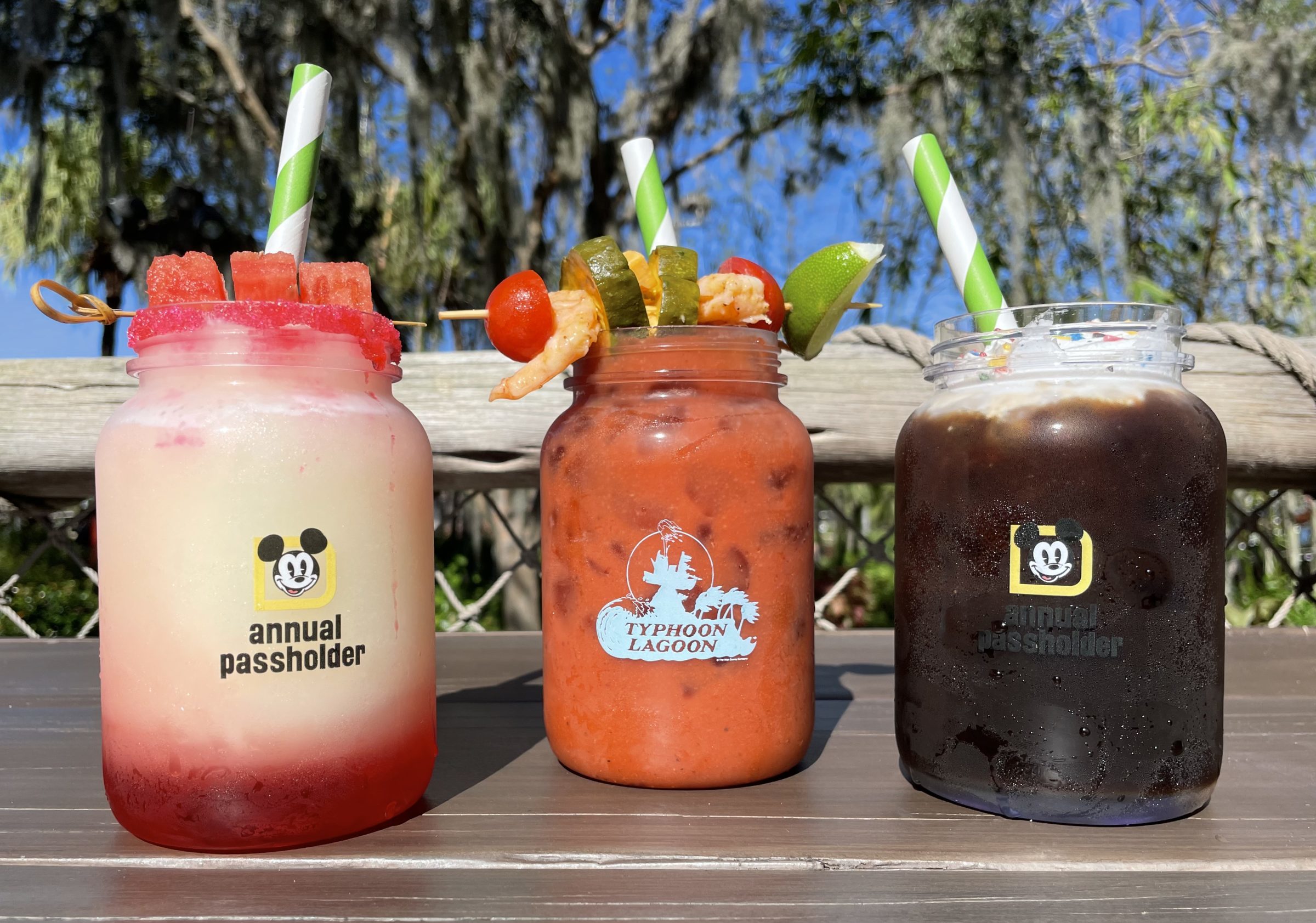 Calling all passholders! Three new exclusive passholder drinks are now available at High n’ Dry at Disney’s Typhoon Lagoon. Of course, we tried them all. So, let’s dive in and take a closer look.

All three beverages come in a passholder or Disney’s Typhoon Lagoon keepsake mug, and are only available while supplies last.

Sal’s Watermelon Lemonade is served with a pink sugar rim and three pieces of watermelon on top. You can add Herradura Reposado Tequila to this frozen lemonade, if you choose. The price will jump to $20.00 to make it alcoholic.

It is served in an annual passholder keepsake mug.

This drink is very refreshing and quenches your thirst. The watermelon syrup does sink to the bottom, so we recommend stirring it up before taking a sip. The frozen lemonade is the perfect balance of sweet and sour, just like lemonade should be.

The pink sugar rim adds a touch of extra sweetness, and if you add tequila, it will help with the bite from the alcohol. The watermelon cubes are just for garnishing. They didn’t enhance any watermelon flavoring in this drink.

We enjoyed this drink, and think the non-alcoholic version would be great for kids.

Coffee lovers, this one is for you. This is your basic cold brew coffee with “cupcake flavoring.” The cupcake flavor is actually just simple syrup. We didn’t get any distinct cupcake taste, just pure sugar. The coffee is bold and strong, not overly sweet from the cupcake flavoring. We used the whipped topping as cream, instead of adding more. It was the perfect amount.

This cold brew coffee is served in a passholder keepsake cup. You can order this with Kahlua for $16.00. Adding Kahlua to this coffee would make it creamier and cut through some of the bold coffee. We will be ordering this again on our next visit.

On to the big kahuna! This is a perfect bloody mary. The spice is just right, not overpowering the mix. Drinker beware because this goes down easily. You don’t taste the vodka in it at all.

It is served in a Disney’s Typhoon Lagoon keepsake cup.

The Fresh Florida Gulf Shrimp pair with the bloody mary perfectly. They are slightly seasoned and have a nice crunch. The cheddar helps to cut through some of the spice from the beverage and the horseradish pickles. We suggest squeezing the lime over the garnish, and into the drink. It adds an extra bite to the bloody mary, and brings in a bit of citrus flavor.

The tomatoes are unneeded. With bloody mary mix being tomato juice-based, the extra cherry tomatoes get lost.

The horseradish pickles have a big kick. It will definitely help to clear out your sinuses. While the pickles aren’t the best match for a bloody mary, they pair perfectly with the cheddar and the shrimp.

We will definitely be stopping at High n’ Dry to get the Beachcomber Bloody Mary again.

Overall the Beachcomber Bloody Mary was our favorite, closely followed by Cupcake Cold Brew. Sal’s Watermelon Lemonade is a great option for kids. We recommend coming to High n’ Dry and giving these beverages a try. Which one do you want to try the most? Let us know in the comments.