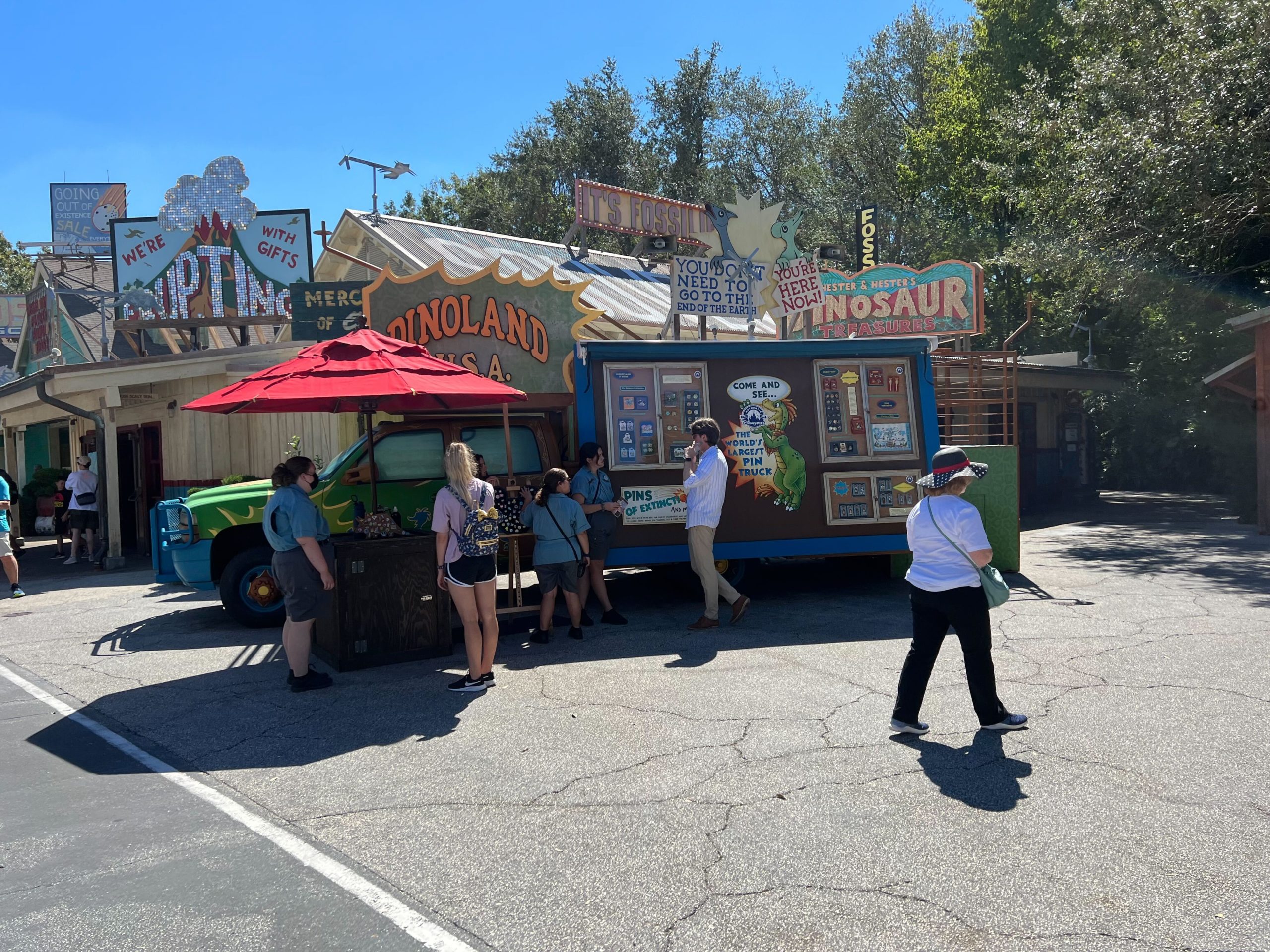 During our most recent trip to Disney’s Animal Kingdom we noticed an unusual addition to Dinoland U.S.A. With the recent removals of Primeval Whirl and Dino Diner, Dinoland U.S.A. has been missing a major attraction. Unfortunately, this is not it, as the addition is simply a pin display truck. While not a major attraction, this is a fun way to spend a few minutes and adds to the needed activities at Dinoland U.S.A. The truck displays a variety of pins no longer available, thus ”extinct”.

Claiming to be “The World’s Largest Pin Truck” this truck displays a variety of pins from Disneyland Resort and Walt Disney World Resort.

When we first spotted the truck, Daisy Duck was gazing at the large display of pins.

The pins Daisy Duck was gazing at were a mixture of different collections, the Mickey 90th Anniversary pin set, Tiny Kingdoms, and Windows of Magic being the main displayed sets.

The Pin Of The Month collection was Windows of Magic, showcasing fan-favorite characters in stained glass windows.

This window displays Mickey 90th Anniversary pins, as well as a placard describing the history of the collection, and the meaning of limited release pins.

The top right panel of the display window continues the Mickey 90th display, with the Tiny Kingdoms collection being directly below it.

The Tiny Kingdoms collection shows off the mystery pins across a park map that comes with the collecting kit.

The left side of the truck features the Disneyland Is Home collection of pins, with several boards showing off different sections of the collection.

A placard shows the history of the Disney Is Home series, with specialty pins displayed in the top portion of the case.

A close up of pins in the collection allows us to admire the designs.

At the bottom, more characters are featured in the collection, such as Buzz Lightyear and Baloo.

The top left of the cabinet has larger pins, one featuring multiple parts that connect to a heart, and the other featuring Tinker Bell.

In the middle left of the display, there is a large pin featuring the Disneyland logo, and several classic couples in smaller hearts. Meanwhile, left of it, several pins including characters such as C-3PO and the Cheshire Cat.

The final pieces of the collection include characters such as Chip & Dale and the characters from Monsters Inc.

A sign informs guests that pins are not available for sale or trading. This is only a display to view and learn about the pins displayed and their associated collections.

In the center of the two displays, a sign invites you to visit the ‘World’s Largest Pin Truck’.

While not a major attraction, the this truck adds a cute stop to view and learn more about Disney pins and pin trading. Sadly, the displays only show pins from the last 3-4 years, which does little to illustrate the history of the hobby that began officially in 1999.