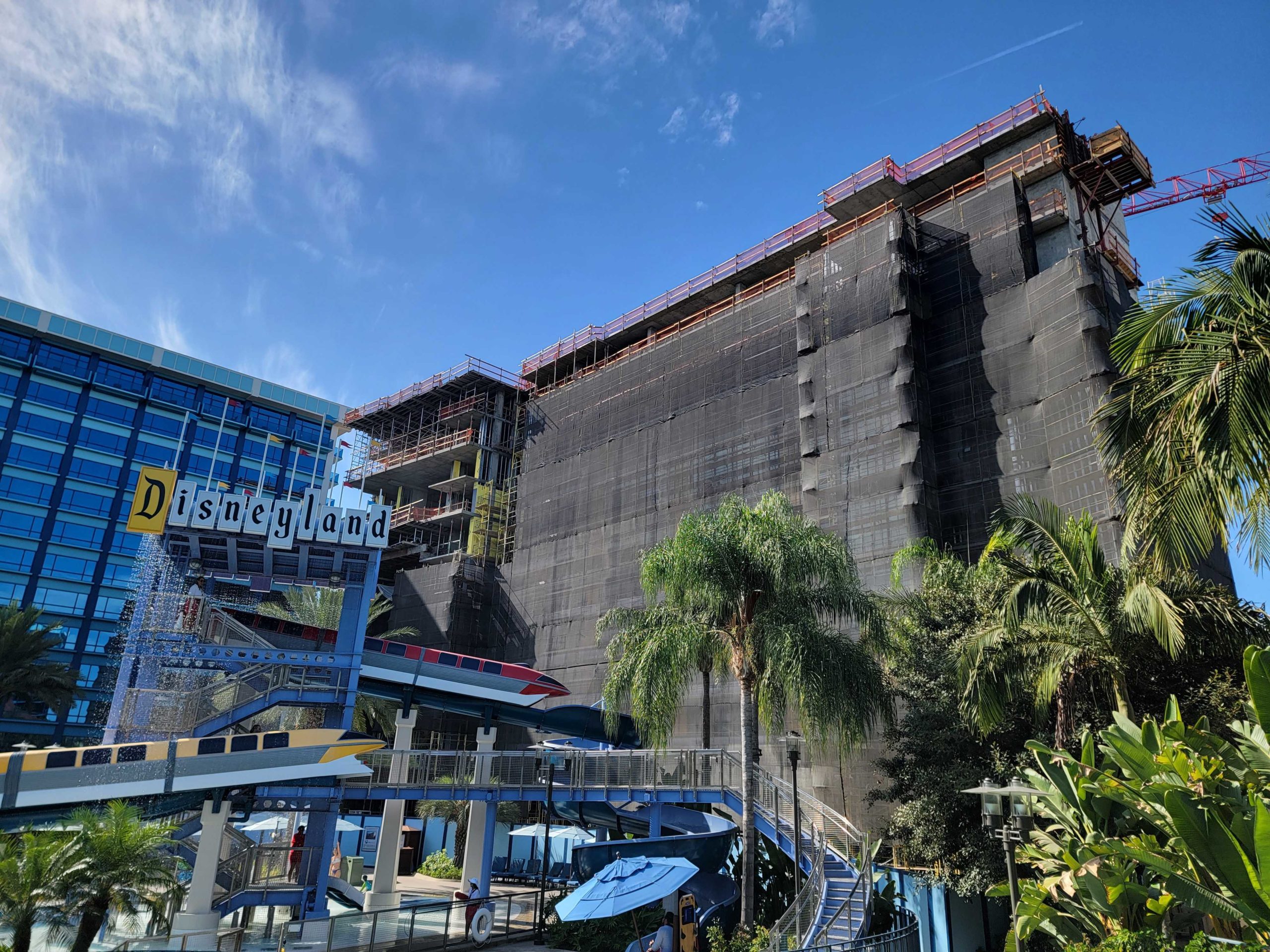 As you may know, the classic Disneyland Hotel is getting a new Disney Vacation Club tower! At D23 Expo, we learned it will be called The Villas at Disneyland Hotel. The project received final approval from The City of Anaheim Planning Commission in the summer of 2020 and we’ve been checking on construction of the tower ever since.

The tower will be right next to the iconic E-Ticket Pool and its Monorail waterslides. The tower’s vertical construction seems mostly complete. Judging by concept art, it will have eleven floors.

Most of it is covered in black scrim, both to protect the inside of the building and the crew members working. Walls and windows have yet to be installed around the entire structure, giving us a look at the unfinished inside.

Temporary wood railings and platforms keep the crew members safe. While construction of the actual structure continues, the supports are still just the gray color of concrete.

There is scaffolding throughout. Just behind the construction walls next to the pool, we can see the open area beneath the hotel. Compare to the concept art below.

The open space seems to be a lounge area with stone-covered columns that leads directly to the pool. The hotel will be covered in colorful light-up panels and windows. Tinker bell flies down the right side, leaving a trail of pixie dust forming a Mickey head behind her.

In this corner, we can see yellow weather-proof sheathing that has been installed on some support columns.

Paneling and paint will then be added on top of the sheathing.

Some of the windows and panels seem to have already been installed and are just barely visible through the scrim. There is still a lot of work to do, however.

No scrim covers this upper corner, but orange netting is attached to the wood railings.

The colorful D-shaped logo for The Villas was also revealed at D23 Expo while concept renderings of the rooms were released a year ago at Destination D23. Disney has yet to announce an opening timeline for the tower or points structures for Disney Vacation Club members.

We also noticed crew members refreshing other areas of Disneyland Hotel this week, making it look spick and span before the holiday season officially begins. If you’re feeling Halloween-y still, a pumpkin carver has been making his way between the three Disneyland Resort hotels to get guests in the spirit of spooky season, and he’ll be around through Monday!

Meanwhile, crews are also working at Disney’s Paradise Pier Hotel, which is being transformed into Disney’s Pixar Place Hotel.