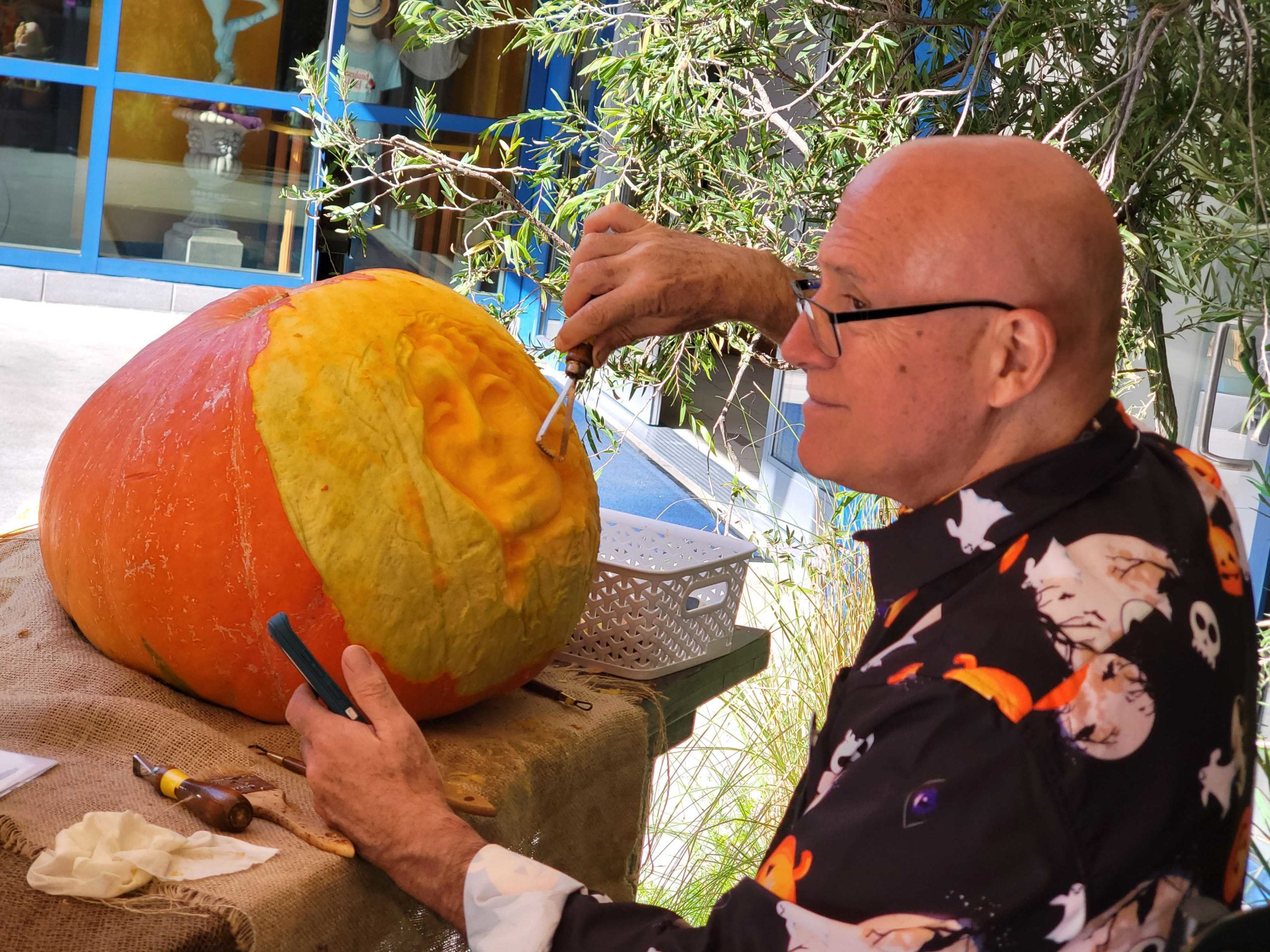 As a delightful cap to spooky season, a pumpkin carver has arrived at Disneyland Resort and is showing off his skills at Disneyland Hotel, Disney’s Paradise Pier Hotel, and Disney’s Grand Californian Hotel daily through Halloween on Monday!

In the mornings, the pumpkin carver can be found at Disneyland Hotel. He’s outside, in a shady area next to the Fantasy Tower sign.

His station includes some of his pre-carved pumpkins as well as pumpkins waiting to be carved, stacked faux autumnal flowers on crates. He’s appearing at Disneyland Hotel from 10:00 a.m. to noon daily.

Guests can watch him carve as well as check out some of the pumpkins he’s already completed.

Can you identify the character he was working on when we first saw him? Hint: she’s a Disney Villain.

All of his carvings are of Disney characters. This one is the caterpillar from “Alice in Wonderland.”

In the afternoon, the pumpkin carver moves to Disney’s Paradise Pier Hotel. He’ll be appearing there from 1:00 p.m. to 3:00 p.m. As this sign indicates, Paradise Pier Hotel guests can also enjoy the Halloween music with the Skeletones at 5:30 p.m. and 6:30 p.m. through Halloween. It’s a welcome distraction from all of the construction going on around the hotel as it preps for a transformation into Disney’s Pixar Place Hotel.

This pumpkin carving station is indoors, tucked under this staircase.

Even when the pumpkin carver isn’t here, there are carved pumpkins on display.

Ohana means family, even when your ohana lives in a pumpkin patch! How cute is this Stitch carving?

The ears of this Mickey pumpkin are made with two smaller pumpkins.

There was even a Frankenweenie pumpkin, a bit of a throwback considering the film is celebrating its tenth anniversary this year and doesn’t see much discussion these days. But a delightful Halloween surprise nonetheless!

Finally, the pumpkin carver appears at Disney’s Grand Californian Hotel from 4:00 p.m. to 6:00 p.m. Are you hoping to see some of his work? Let us know in the comments.

The 2nd edition Haunted Mansion tiki mug was also just released at Trader Sam’s Enchanted Tiki Bar at Disneyland Hotel today, so guests can visit the pumpkin carver after picking up their mug. Meanwhile, guests staying at Disney’s Grand Californian Hotel will now be gifted artwork by Bret Iwan, the current voice of Mickey Mouse. And be sure to read our latest construction update from Disney’s Paradise Pier Hotel, which is being transformed into Disney’s Pixar Place Hotel.