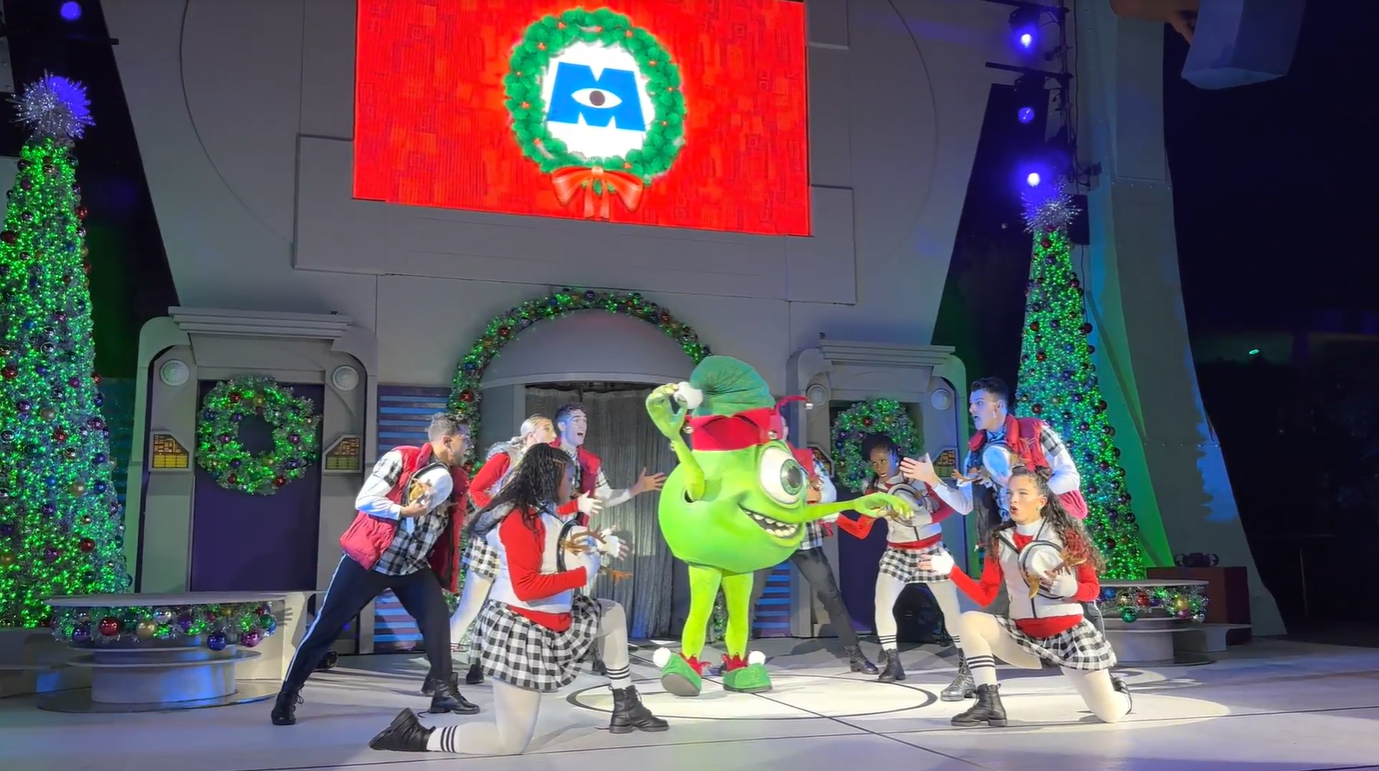 A Totally Tomorrowland Christmas has returned with Mickey’s Very Merry Christmas Party at the Magic Kingdom. The stage show takes place on the Rockettower Plaza Stage as host Haley Comet is joined by Stitch, Buzz Lightyear, and Mike Wazowski to ring in the holiday season in futuristic fashion.

A “Star Wars” style scrolling intro plays at the start of the show.

The host, Haley Comet, comes out with dancers. They perform “Rockin’ Around the Christmas Tree.”

Partway through the song, Buzz Lightyear and Mike Wazowski join the festivities.

Stitch joins in via video chat from his spaceship.

Stitch working on a project to find Santa. He says Santa sounds “easy to catch,” which Haley brushes off with a laugh.

Buzz returns to tell a Christmas story about a conflict with Zurg. He tells the story with a rhythmic cadence like a storybook. Dancers in Star Command-style outfits join him.

Zurg appears on the screen and his minion dancers aggressively sing a version of Jingle Bells. They substitute some of the lyrics with threats like “We’ll get your precious jingle bells and take them all away.”

Buzz and the cadets return the dance battle with “Dashing Through the Snow” (but they also switch out some of the lyrics for the more thematically appropriate “dashing through deep space in a turbo rocket sleigh”).

Zurg and his minions learn the reason for the season and decide to stop fighting.

After Buzz finishes his story, Haley comes back out to check in with Stitch. He alludes to attempting to capture Santa, so Haley clarifies that they want to invite Santa for the show’s big finale. She’s hoping he’ll bring snow! Stitch doesn’t understand who Santa is, so Haley has the crowd help explain.

At first, Stitch is upset by the idea that his badness level might prevent him from receiving a toy.

Upon discovering that Santa not only spies on children to see if they are good but also “breaks in” to houses, Stitch becomes alarmed. He says Santa sounds like a snitch, and then he declares “Stitch take care of Santa” with a mischievous laugh.

Haley is a little worried, but the show must go on. Dancers come out to “Rudolph the Red-Nosed Reindeer” before introducing the special guest… Mike Wazowski.

They do a reprise in which Mike tells jokes in between lines of the song.

Haley comes back and is interrupted by Stitch, who lets her know he has tracked down Santa. Then his screen reads “Target Acquired” and Stitch draws two laser guns. Haley has to shut down the weapons systems and scolds Stitch for trying to “blast [Santa] into smithereens.”

Stitch still does not understand why Haley wants to let Santa break into people’s houses. They make a breakthrough when Stitch realizes that Christmas is about ‘Ohana.

Stitch promises to go find Santa and dashes off. Haley decides to go forward with the big finale, hoping Santa will join in and bring some snow.

The dancers join Haley for a rendition of “Santa Claus is Comin’ to Town” and they are joined by… Santa Stitch!

Don’t worry; the real Santa flies over and delivers Haley’s wish for snow as “snoap” descends on the crowd.

Watch our full video of A Totally Tomorrowland Christmas 2022 below.

For more party entertainment, check out our videos of Mickey’s Once Upon a Christmastime Parade and Minnie’s Wonderful Christmastime Fireworks.