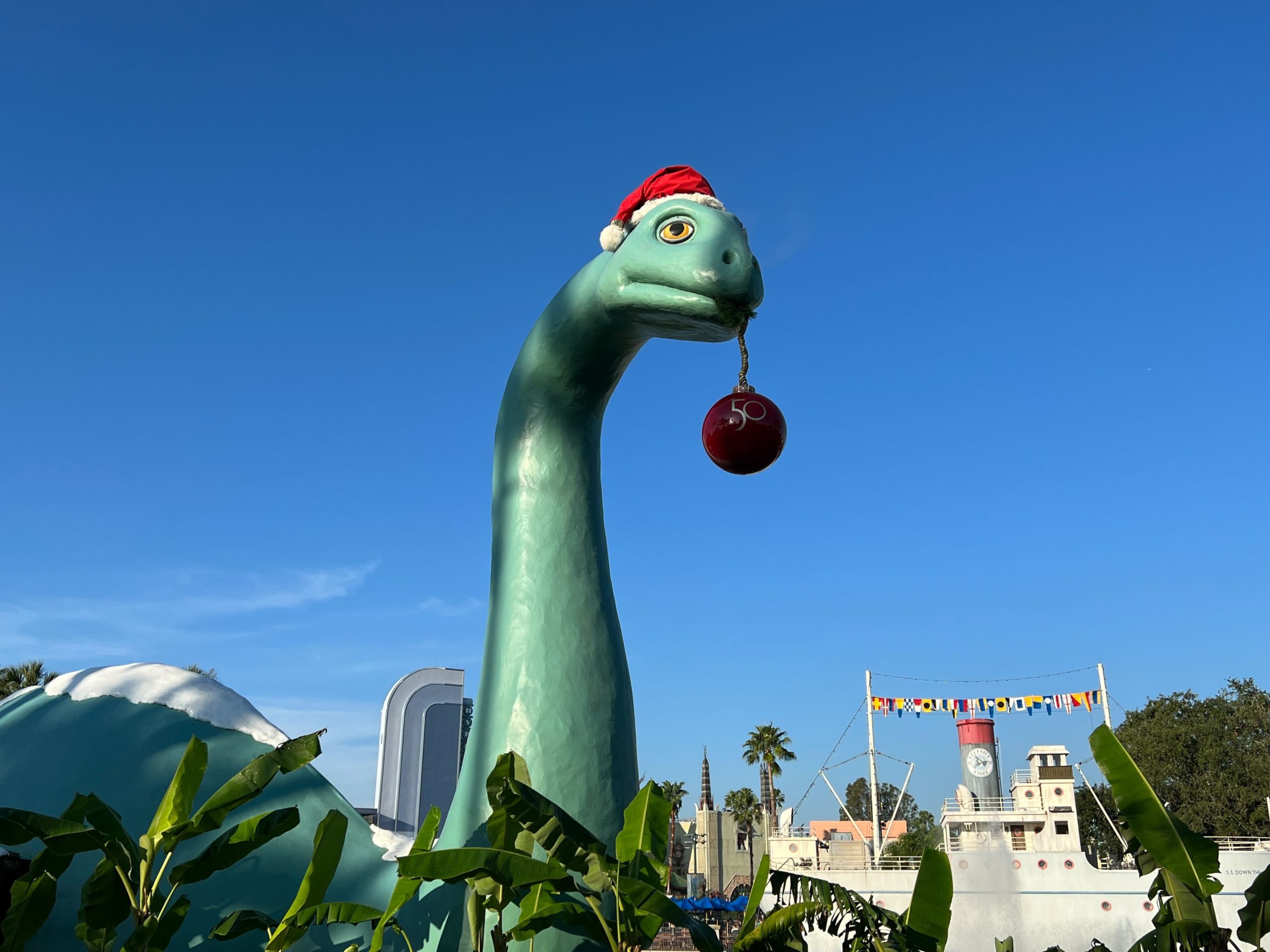 The ornaments are all different shapes and sizes.

Gertie the dinosaur is ready for the holidays with a Santa hat and giant ornament.

The Santa hat is red with a silver bow and white fur trim.

The ornament dangling from her mouth is red with a golden “50” on it for the 50th anniversary celebration.

Next to Gertie and Echo Lake are the green umbrellas decorated to look like Christmas trees.

Decorations now adorn the exterior of the Sunset Boulevard shops, too.

This silver garland is at Sunset Ranch Market.

Among the orb ornaments are poinsettias, Santa ornaments, and snowmen.

Tinsel with holly, red and green bows, and snowman figures are on the columns in the market.

The wreaths are decorated with elf figurines.

Silver garland with colorful ornaments is at the entrance to Mouse About Town.

The Sunset Club Couture garland has rose gold bows and leaves in them.

Wreaths hang to either side of the Sunset Boulevard restrooms entrance.

These have snowman figures nestled in the centers.

A wreath full of ornaments and ribbons in shades of blue is on The Majestic.

Matching garland is above some of the windows.

The decorations have film strips and giant music notes.

The Anaheim Produce stand has garland and wreaths full of red ornaments, resembling some of the fruit they sell.

The wreaths also have red and green bells at the centers.

Small wreaths hang next to the windows of Sunshine Day Bar.

These have large red ribbons and silver bells.

The Disney Vacation Club stand has travel-themed garland and wreaths.

More silver garland and snowmen are on Reel Vogue.

Golden bows are on the ends of the garland.

This wreath has a bow made of pink fabric patterned with ornaments. Caroling snowmen are tucked into the tinsel.

The tinsel Christmas stars were installed on lampposts earlier this week.

The garland on Hollywood Junction is decorated with white and red poinsettias.

There are large shiny ornaments and stars in the garland.

Wreaths with jingle bells and Santa faces are on the walls.

Wreaths are also up on the Trolley Care Cafe (Starbucks).

These silver wreaths have shiny poinsettias and ribbons.

The garland on the front of the cafe features more ribbons, ornaments, and holly.

On Hollywood Boulevard, wreaths can be seen in the windows of Celebrity 5 & 10.

Poodle figures in Santa hats are at the center of these wreaths.

Golden roses are below them.

Decorations on The Darkroom feature vintage cameras and film reels.

Lampposts near the front of the park wear small Christmas trees like dresses.

Garland runs around the Crossroads of the World.