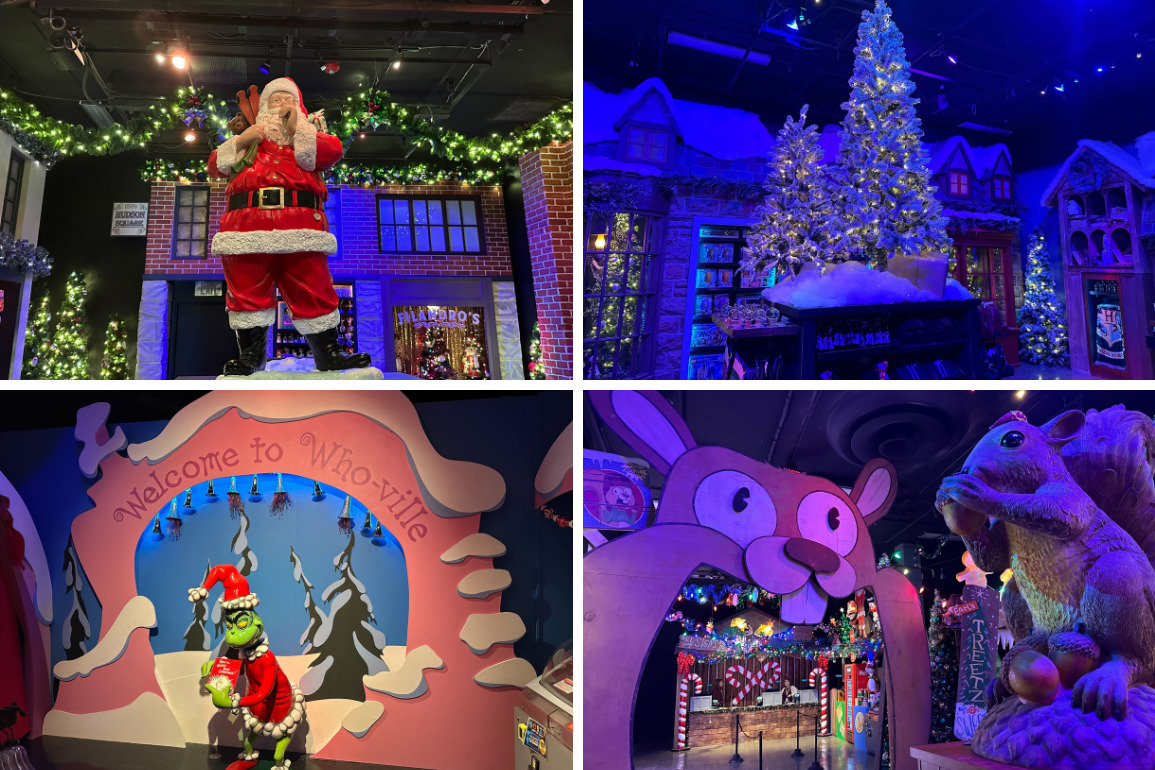 This year’s façade gives off the vintage vibes of a luxury department store, decked out for the holiday season. Silver trees and a family of mannequins can be seen in the window above the entrance. Reindeer and trees surround the entrance, welcoming guests into the store. Let’s see what awaits us inside.

The entrance foyer features mannequins for the department store theme in a mix of Christmas finery and Universal apparel.

A directory of the floors (rooms) is posted. We still miss Halloween Horror Nights and want to go to the Eerie Emporium.

There’s an advertisement for this year’s photo display opportunity.

Each room has its own art deco-style poster. The New York Holiday poster as an NYC skyline with Santa flying above.

The Wizarding World depicts Hogsmeade Village with a Christmas tree. Hogwarts Castle looms in the background.

Whoville is dressed with Christmas cheer on the third floor poster.

Earl’s North of the Border is represented by a depiction of the shops and Earl’s large archway, which guests will walk through later in the store.

Fresh cut Christmas trees are wrapped up waiting to go at the entrance.

Santa takes center stage in the first room, which is themed to a retro New York Christmas. Brownstones line the walls, and the halls are decked with tons of garland.

The faux buildings are themed to shops, like Carl’s Toy Chest.

A cart peddling NY Famous Roasted Chestnuts is tucked away next to a Coca-Cola refrigerator. The cart has been repurposed to support a group of gnomes.

A display window features the classic Coca-Cola Santa and a tree decked out with related ornaments.

A lot of the merchandise is returning from last year.

A King Kong reference is on the sign for Empire State Co.

The window displays are dynamic, with moving toys and features.

The nutcrackers open and close their mouths.

Room 2: Christmas in the Wizarding World of Harry Potter

The second room is devoted to Christmas in the Wizarding World of Harry Potter. Hogsmeade-esque buildings are covered in snow.

Much like in other years, the room is bathed in deep blue light.

Owls are nestled in post compartments above some of the shelving.

All sorts of Wizarding World merchandise is available here, from ornaments and plush to robes and scarves.

If you purchased your portrait for the Tribute Store, you’ll be able to find it in the hallway. It’s not too late to purchase your own photo to be added to the hallway, too. Get the details here.

Advertisements for other products and experiences can be found, like this Mount Crumpet-esque Cave of Seclusion poster. It’s been advertised as a “stay-away-cation” rental minutes from town. It is fully equipped with “none of the major appliances and zero hot or running water.” At least it has all-you-can-eat canned food and cavernous echoes included?

While we might pass on the Cave of Seclusion, we do recommend a trip to Mistletoe Pines Village… or, we would, but it seems to be closed due to a rockslide. Mistletoe Pines was the village at CityWalk last year that offered holiday vibes, spiked eggonog, and shopping.

The next posters are a one-two punch in the gut for Universal Studios Florida fans. This advertisement is for a used parade float (now out of stock). It reads, “Bring the excitement home and on your commute to work! Drive down the highway in style at only 5 MPH. Windows? Don’t need those! Doors? Forget them! Bring all of your friends and party like a super star!” It’s only ten years old and has “pet friendly seating.” The image is the lead float from the retired Universal’s Superstar Parade, which had its last performance in June 2022.

As for this poster, we think it’s simply too soon. Now out of stock, Earl was running a lightning sale on a “Monster Eater” that was definitely haunted. A world famous hub for hungry monsters and humans alike, this reference to the Universal Studios’ Classic Monsters Café might bring down the holly jolly mood. “Some reassembly required,” indeed.

On sale now is the Holiday Sequoia, with real fake leaves and imitation woodland smell — a reference for the much beloved indoor queue at E.T. Adventure.

There are puns galore on the last in stock ad for a Hydro-cano (Krakatau at Universal’s Volcano Bay). The poster advises “don’t take the deal for granite! It might just flow by!” and “You will lava it!” Buyer beware, you will get wet, it may raise your water bill, a talkative spirit is included, and the sand is not.

The last poster is selling the Pharos Lighthouse from Universal’s Islands of Adventure. The antique lighthouse was built “so long ago no one remembers a time without it.”

A small arrow on the door leads you into Who-Ville.

The Mold-A-Matic machines aren’t working yet, but this one will feature the Grinch.

The room is decorated with the homes of Who-ville.

Mount Crumpit, home to the Grinch, can be seen.

Room 4: Earl’s North of the Border

The true icon of the holiday season is Earl the Squirrel, so it’s no surprise there’s a room dedicated to him.

Earl’s tree is topped with a giant acorn.

The sign from the Earl room in the 2021 Christmas tribute store is here. It reads Earl the Squirrel’s Christmas Curious Museum & Emporium.

This may look like just an elaborate window design, but if you take a closer look, the entire room from last year’s tribute store has been recreated here.

The crane in the window moves Earl up and down.

There’s a large squirrel figure in the room.

He wears a little trapper hat like Earl and has a small tree farm truck parked behind him.

Pass through Early’s mouth to get to the checkout counter.

One of the best parts of the Tribute Store is the snack case! We’ll be back soon to try some of Early’s Treetz of Sweetz. The signs have wordplay like “Treet yo’self” and “Tree-tail therapy.”

An Earl photo op is here with a standee and a sign that says, “Take a picture, it’ll last longer.”

There are a ton of tongue-in-cheek jokes and references on the World’s Best Nuts camper.

Some of the bumper stickers here read “I got drenched at Mistletoe Falls” and “Honk if you like nuts!!!” Another features a quote from Earl that says “Trees can’t pick up their leaves, but YOU can pick up your trash!”

More fictional roadside attraction souvenir stickers read “I might have gone to Enigma Caverns?” and “The Rock of Mystery Down the Road from Earl-lando.”

“I got a monster hangover at the Dead Coconut Club.”

“I saw the mysterious thing! So mysterious! Such thing! Wow!”

“Henry’s House of Cat Stuff” references the cat Mold-A-Matic from the Halloween Horror Nights tribute store and is named after the cat of one of the store’s designers.

The Green & Red Coconut Club is the holiday successor to the Dead Coconut Club. It has yet to open at Universal CityWalk Orlando.

“Tune in to WGRC for the BEST Holiday Programming!” This is another reference to the upcoming club.

“I got traumatized at… Earl’s Tchotckes and Things.” Once again, like with the fake Halloween Horror Nights Tribute Store merchandise, we are begging Universal to please sell these. We just want to put these on our cars next to an “I got scared by a head on a stick at Hollow Hills Cemetary” sticker. Please!

Apparently, Earl has a cousin or relative named Daryl the Squarral who runs Daryl’s Bee Farm. The disclaimer assures that no bees were harmed in the making of this bumper sticker.

The other Mold-A-Matic figure looks to be Earl, but is also unavailable.

A squirrel version of the classic leaping reindeer decoration is above the exit.

There are also posters for some very unsettling attractions coming soon to Earl-lando. Earl’s Looping Acorn Accelerator boasts being made with 100% recycled acorn pieces, while Earl’s Nautical Freelancers of the Frozen Great Lakes will be an eight hour fishing trip in the freezing cold.

Mistletoe Falls: Earl’s Big Adventure is an upcoming log flume that assures guests that you WILL get wet and it’s only 12° outside!

At the Trapper Hat Observation Tower & Petting Zoo, you can meet Gerg the Llama who is celebrating a birthday. This is reportedly the same llama for whom a ride operator at the HHN Tribute Store had a post-it reminder to buy a gift for. (Though, the post it said Greg and not Gerg.) He is also the same as “Gregory,” who celebrated a birthday at the summer tribute theater. (We wouldn’t overthink it too much).

And of course, there are holiday collectible medallions.

These are the same designs from last year.

The last room before you exit is chock full of details.

The large sign advertises the Earl-lando preview center. We can think of another Orlando theme park we’d love to see a preview center for…

Orlando locals will get a kick out of this poster.

The fuse box has a sticker warning of an electrical hazard with a little photo of a squirrel chewing on a wire. If you aren’t familiar, this is a reference to Earl the Squirrel’s origin, where Team Members installing the giant Christmas tree in the park discovered a string of lights chewed through by a squirrel. They named him Earl, and he became a legend, with a fake squirrel hidden in the tree each year.

This year’s Holiday Tree Hunt map is designed like a comic book. Here, other seasonal Earl comic books are displayed, including one for Mardi Gras and one for Halloween.

Another coaster and swizzle stick for the Green & Red Coconut Club is here.

A map for Earl’s North of the Border and Earl-lando is on display.

Once outside, there’s a photo op.

The Holiday Tribute Store is open daily at Universal Studios Florida now through January 1. Be sure to stop by and do some shopping and grab a holiday treat on your next visit to the Universal Orlando Resort.

Watch our full video tour below.