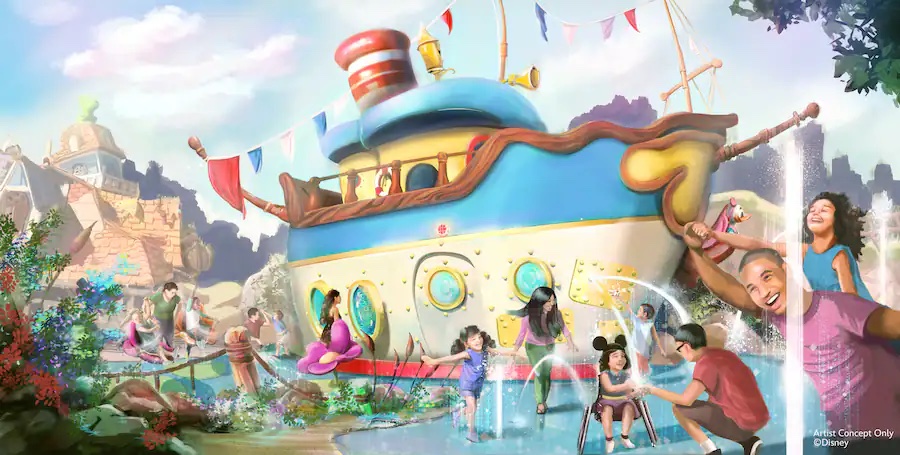 Mickey’s Toontown at Disneyland will reopen on March 8, 2023, a year after it initially closed. The land originally opened in 1993 and is receiving a major overhaul to coincide with the opening of Mickey & Minnie’s Runaway Railway, which also opened in early 2020 at Disney’s Hollywood Studios.

Mickey & Minnie’s Runaway Railway will open ahead of the rest of Mickey’s Toontown, on January 27, coinciding with the Disney 100 Years of Wonder Celebration.

Mickey’s Toontown will have more open, grassy play spaces including CenTOONial Park, the first space guests will see when they enter the land. CenTOONial Park will be anchored by two new interactive play experiences: a fountain featuring water tables designed for play and a dreaming tree with sculpted roots for children to crawl through.

Inside Goofy’s house will be an interactive candy-making machine. It actually begins high outside of Goofy’s home, as drips of honey fall from a beehive onto a chute that slides the colorful drops around and down into the home. From there, young candymakers can help Goofy make the candy.

Gadget’s Go Coaster will become Chip ‘n’ Dale’s GADGETcoaster, still drawing inspiration from the character of Gadget Hackwrench, who has created a one-of-a-kind, fun-sized coaster for her friends, Chip and Dale.

At Mickey’s House and Minnie’s House, guests will once again be able to step right into their homes and enjoy a self-guided tour. Mickey and Minnie will also return to greeting guests inside.

Roger Rabbit’s Car Toon Spin, which was updated before the land closed, will also return.

As previously reported, Chip ‘n’ Dale’s Treehouse and the old character fountains were demolished. For a look back on what Mickey’s Toontown looked like before it closed in March 2022, check out our full tour of the land.