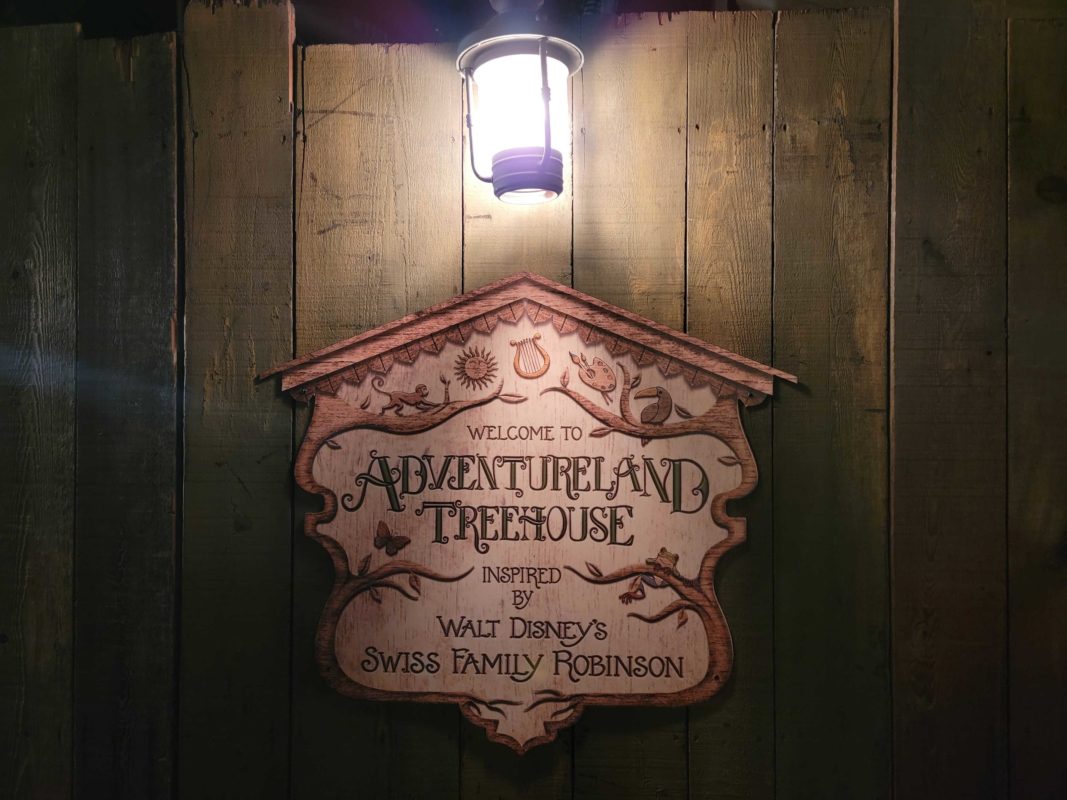 Last week we reported that Tarzan’s Treehouse at Disneyland Park is returning to its roots and being transformed into the Adventureland Treehouse, with an original story partially inspired by “Swiss Family Robinson.” Now, new signage has been erected along the construction walls that surround the project.

A welcome sign designed to resemble an intricate woodcarving is now posted on the walls outside the treehouse. It reads, “Welcome to Adventureland Treehouse Inspired by Walt Disney’s Swiss Family Robinson.”

Another sign simply reads, “coming soon.” No opening date has been announced for the Adventureland Treehouse beyond “2023.”

A copy of the concept art (showing the real welcome sign’s future home) is also displayed.

The concept art for the new treehouse can be seen below.

It was rumored that the attraction would become S.E.A.-themed. While it may not be an entirely S.E.A. attraction, there is a Society of Explorers and Adventurers banner in the concept art. It hangs off the astronomer’s loft on the left room.

Each member of the family will have their own themed room, featuring found objects and natural resources that they have repurposed for home use, not unlike previous iterations of the treehouse. Above is concept art for the mother’s music den. The young son will have a nature room, and the teenage daughter will have an astronomer’s loft.

To make the attraction more accessible for guests unable to climb stairs, or who just don’t want to go up high, the bottom floor will be expanded to include a kitchen, dining room, and the father’s art studio displaying hand-drawn sketches and paintings of each of the rooms.

We also took a quick peek at the construction since the scrim is still down on the upper scaffolding levels.

The new signs are staggered on the faux-fence in the walkway.

Work is being done on the upper levels, but the new theming is not yet in place. Most of what can be seen from the ground is more scaffolds, work lights, ladders, and other construction equipment.

The work began in September 2021, when Tarzan’s Treehouse was closed abruptly with no warning or explanation. The attraction had suffered a prior sudden closure in 2019, when the bridge broke from jumping guests. The bridge, along with the entrance tree, has been removed.

The original Swiss Family Treehouse at Disneyland was replaced by Tarzan’s Treehouse in 1999.

Now that the announcement has been made, we may see more theming emerge in the coming weeks. Stay tuned for more Adventureland Treehouse updates.

Are you excited for this transformation? Let us know in the comments below.

DinoLand U.S.A. Lights Up for Christmas 2022 at Disney’s Animal Kingdom