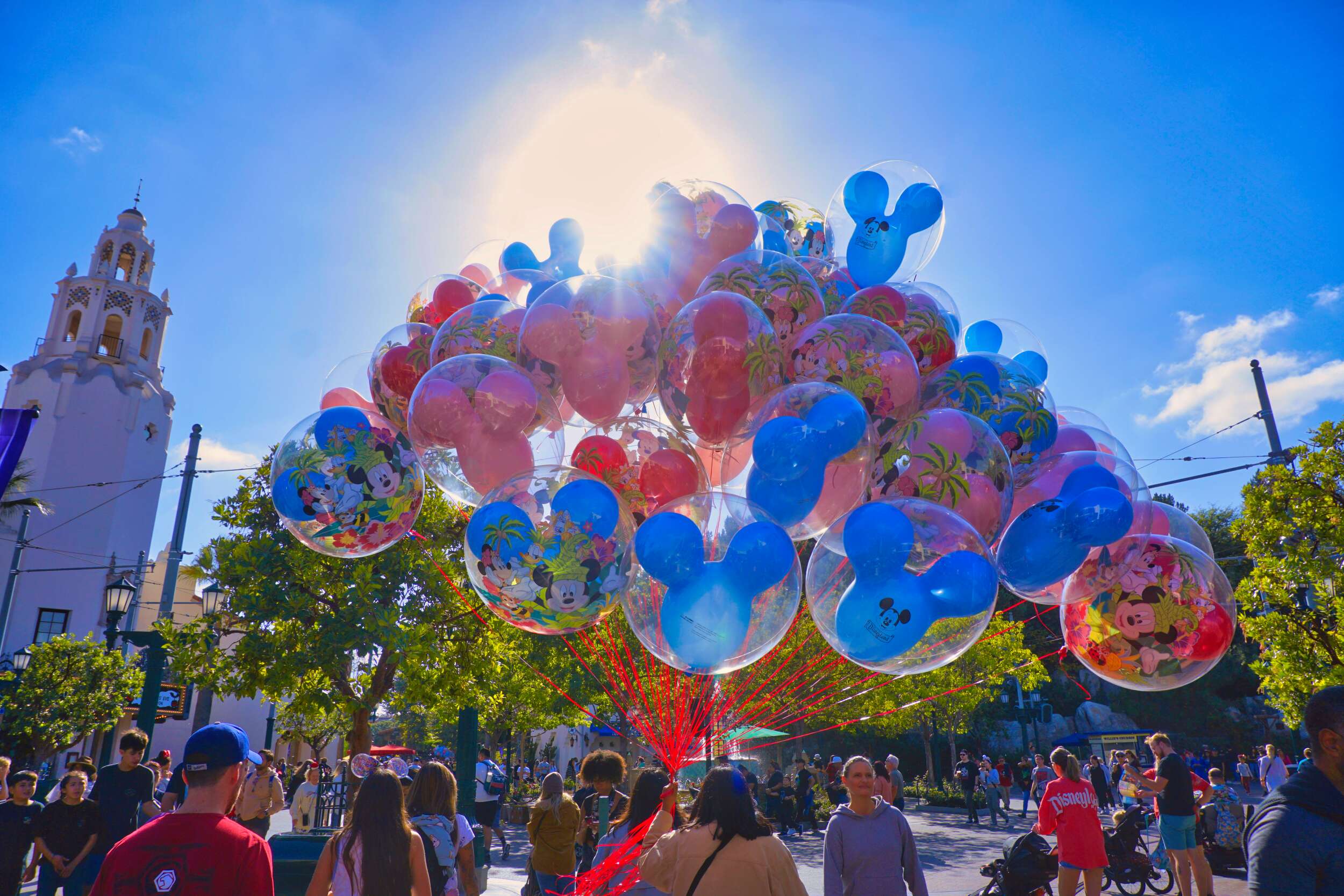 Hey there, hi there, ho there! It’s the day after Halloween, and we headed down to the Disneyland Resort to see how the cleanup is going. So join us for this most recent photo report from both parks.

Before we even reach the security checkpoint, we are already made aware of the holiday celebrations in store.

As we boarded the Monorail to head into the park, we noticed that we have a new map featuring Minnie Mouse on the cover and details on the MagicBand+ inside.

Seeing as Halloween officially ended about eight hours ago, the biggest decorations have yet to come down from the park. The flower bed is still Halloween-themed, and the pumpkins still adorn the top of the entrance gates.

It is a surprisingly cold day with beautiful, wispy clouds in the sky that make for some great photos.

We could see from the Monorail that the hat has been added to the clock face of “it’s a small world” as the holiday overlay is installed.

Our first stop was to get a closer look at the clock. We can’t wait for this to reopen for the holidays.

We also noticed some decorations already installed on the popcorn cart nearby.

Speaking of popcorn, this new Christmas Cocoa Popcorn might be our new favorite snack of the season.

In other holiday merchandise news, this glow wand and a new glow necklace, not pictured, are great for lighting up the long, cold nights.

The snow and icicle installation on the castle is almost complete, and more holiday decorations have been rolled out resort-wide.

Critter Country is all decked out.

In Pooh Corner, we found a few new holiday plushes that are just so cute. Chip and Dale are stuffed in a stocking.

And Mickey and Minnie are showing off their new holiday costumes in plush form.

Over in Tomorrowland, we took a look inside the recently reopened TomorrowLanding, which is now a retail spot for MagicBand+ and pins.

The left side is dedicated to MagicBand+ selections. As the service is still quite new, Cast Members were on-hand to help answer questions and troubleshoot issues with the bands.

The right side of the shop is mostly pins and lanyards.

Behind the registers is a sign for MagicBand+, as that is a major focus of the shop right now.

At The Star Trader, we found a few new pieces of the Greatest in the Galaxy collection, including this Loungefly bag and this button-down shirt.

And of course more holiday merchandise, with this adorable holiday Ewok.

For even more holiday merchandise, we headed off-world to Batuu for the Life Day 2022 collection. This sleeved blanket is pretty cool, but our favorite is the shirt with the cutest little Wookie in the galaxy.

Back on Earth, we headed West to check out the holiday decor in Frontierland. Of course, the Halloween Tree was still up among the garlands, so it gives a different feeling to the atmosphere of the land.

In the Home Store, we came across some cool new holiday merchandise like this wreath, as seen above, and this massive serving tray, as seen below.

And fans of “The Santa Clause” can now take a piece of the magic home with this reindeer mug styled after Judy’s special hot cocoa recipe. We couldn’t resist this mug, and now we need to get to work on perfecting a recipe over the next 1200 years.

World of Disney is full of holiday decorations and displays, and more merchandise based on “The Santa Clause.”

The Rose Suchak Ladder Company has gone into the desk set business with this new business card holder, complete with the contract card from the film.

An import from the East Coast, this Germany Pavilion Christmas collection is direct from EPCOT and features several pieces of merchandise.

We found several new Starbucks tumblers for the season that are selling fast, but we were lucky enough to catch them all in stock.

And “the holidays” are not only about Christmas. This Hanukkah collection can bring extra joy to the night of lights.

Speaking of joy, we found even more plaid “JOY” items too add to the collection.

It’s new pin day, and we found lots of holiday pins that released today. This “it’s a small world” holiday pin folds out to reveal several vignettes from the attraction.

Each of the hotels received a spinner pin today, each featuring a hero and villain on the spinning ornament.

We also found some mystery ornament pins that have one revealed pin and one mystery item hidden behind the backdrop. It could be a lanyard, a magnet or a patch. You won’t know until you crack it open.

And the standing collection of holiday pins were released recently as well, featuring several designs that help to make the holidays bright.

At Ralph Brennan’s Jazz Kitchen Express, we have some new seasonal beignets. This month, they are Maple Pecan Pie Glazed Beignets. We can’t wait to try them.

From afar, we could see the repainting progressing on Disney’s Paradise Pier Hotel as it is turned into Pixar Place Hotel. Let’s take a closer look.

At the back (and right now, only) entrance to the hotel, we can check in on the last remainder of the original DCA 1.0 theming — the Paradise Pier billboard.

It remains safe for now, but we know its days are numbered.

Inside the hotel the kids cartoon room is now closed and the windows blacked out.

Also, the pool and the second floor are off-limits to guests as construction is underway.

Over at the Disneyland Hotel, the luggage storage area out front is undergoing a refurbishment.

It is surrounded in construction walls and fencing with scrim.

A temporary luggage storage area has been erected in the parking lot.

This Spider-Man mug is perfectly festive and features Spidey, Ghost Spider and Spin, scattered around the cup.

We also found this festive Funko POP, and we think there is a spelling error there. It says “Boba Fett” but seeing as he is made of snow, we think it is meant to read “Snowba Fett,” as that is the only logical way of saying it.

In what might be the coolest piece of holiday merchandise yet, this Holiday Edition of the Phase II Clone Trooper looks like a gingerbread man and comes complete with an icing gun and a Santa Porg.

Cars Land had the most Halloween decorations of anywhere in the park, and they have already made some good headway on removing them after one night. The sign is back to normal and the witch car is gone.

All of the hanging spooky smiles that spanned the road are removed as well.

We sure had a fun, but cold, day here at the parks.

One final parting shot from home, where our favorite new purchases of the day make a festive pair as we unwind after a long day.