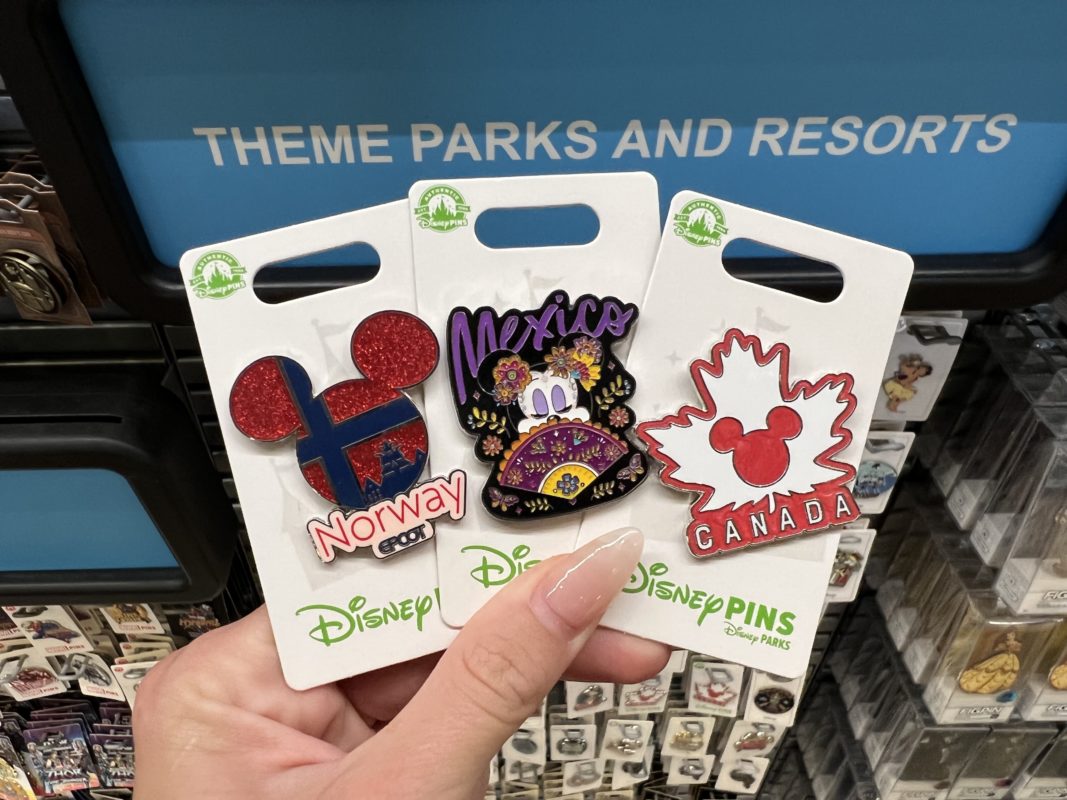 Good morning from EPCOT! It’s a gloomy Saturday morning, but it’s never a bad day to be at our favorite park!

Our first stop of the day is at Pin Traders. New Norway, Mexico, and Canada World Showcase Country pins are available. Each pin is $14.99.

A new black studded Starbucks tumbler has arrived at Creations. This one is matte with the Starbucks siren on one side and the 50th anniversary logo on the other. The cup is $49.99.

A familiar face from “Coco” is on this bag of Mexican cocoa popcorn that sits next to the Christmas cocoa popcorn. Each bag is $6.79 and available near the registers at Creations.

There are plenty of the new Peppermint Loungefly backpacks in the Christmas section of the shop.

We made a pit stop at Club Cool for some Royal Wattamelon. The beverage stations are still using non-branded sample cups while they are out of stock of their usual Coca-Cola ones.

The newly-renamed Refreshment Station seems to be missing its sign. It was covered up not long after being installed.

Disney Traders has a new Black Panther Wakanda Forever Artist Series baseball hat. The hat is brightly colored with a leather stitched square on the front for $34.99.

A Spider-Man “Most likely to save the day” long-sleeved black shirt is perfect for the web-slinger in your life. The shirt is $39.99.

More holiday decor has sprouted up at the food booths around World Showcase as Food & Wine Festival comes to a close. It won’t be long before the Festival of the Holidays is here!

Over at The Seas, the upstairs nursery is open again, but a small corner of the area is still under refurbishment as it makes way for more tiny sea creatures. Since our last visit, “Aquaculture” and “Underwater Wonders” signs have been installed above the tanks.

As we made our way around World Showcase, we made sure to wave to the big Troll in Norway at The Fjording. Someone gave him a Viking hat.

In China, the four large lanterns that used to sit in front of the pavilion have all been removed, and the pavement has been scored for replacement.

Around this time, we got a notification on our phones that there would be an Annual Passholder exclusive viewing of Fantasmic! tonight!

The bridge and landing area in Italy have had their construction walls removed to show some freshened-up pavement, but work still needs to be done on the actual bridge and surrounding pavement.

The American Adventure sign has been removed during the attraction’s closing period. It is set to reopen later in December.

Our last stop of the day was outside of the park at Disney’s Beach Club Resort and Disney’s BoardWalk Inn, where we found more adorable gingerbread house ornaments!

We have to get some rest to make it to tonight’s Fantasmic! showing, thanks for following along today! Will we see you there?