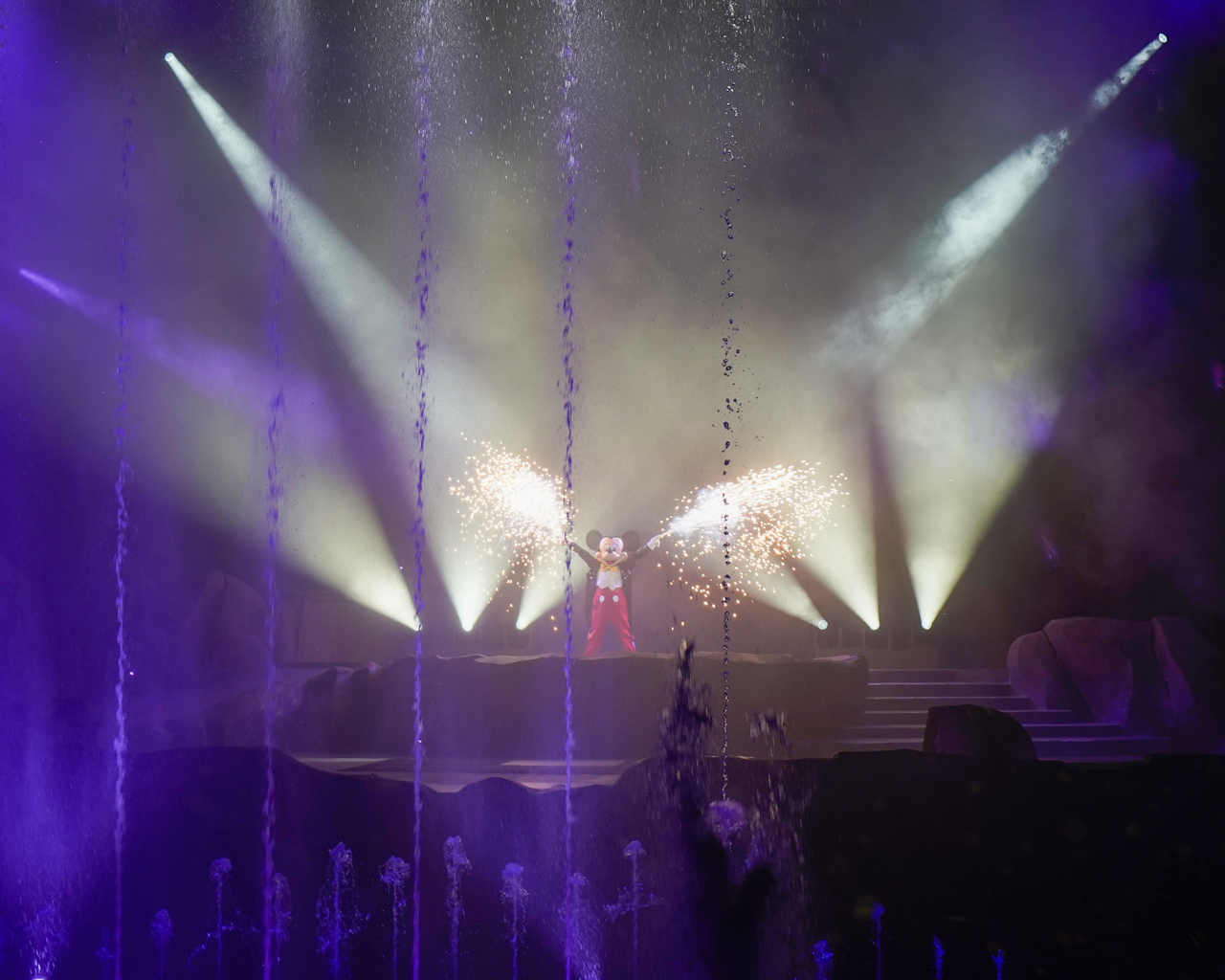 “Fantasmic!” has finally returned to Disney’s Hollywood Studios after two and a half years. The show received upgraded lighting and audio systems as well as a new scene. We attended the official return debut this evening, November 3, at the Hollywood Hills Amphitheater.

Crowds were quick to pack Sunset Boulevard in anticipation for the show. Viewing spaces finally closed about 45 minutes ahead of showtime. We were finally allowed into the Hollywood Hills Amphitheater around 6:00p.m.

Thanks to this early seating time, we were afforded a rare daytime glimpse at the mountain at the center of the stage.

The merchandise cart complete with “Fantasmic!” emblem was open selling generic Walt Disney World merchandise. It seems nothing was produced for the actual show reopening.

Concessions were available, but the line was incredibly long.

Boxes of popcorn were also sold before showtime throughout the theater.

Some of the new lighting on the mountain is on even before the show starts.

It certainly was packed inside the amphitheater. Every single seat was full.

An overflow “limited view” area was also opened to guests this evening off to the side.

Meanwhile the line for the second performance of “Fantasmic!” at 9:30 stretched all the way to the park’s entrance area, near Celebrity 5&10.

The lighting upgrades are noticeable immediately and to great effect. The new lighting increases visibility for the stage scenes and is heavily used to colorize scenes both on stage and on the water. Lasers are used to add kinetics to the scenes with emphasis on the mountain.

The speech that kicks off the show is unchanged. The narration is exactly the same as in 2019. However, the changes start immediately after as dancing pinpricks of light are projected on the mountain as the music rises.

As the tension builds to Mickey’s debut, the light towers no longer produce a strobe effect but have six moving spotlights creating a similar but less glaring look.

The use of smaller fountains and lasers is heavier throughout the whole show.

In the iconic moment when Mickey shoots out fireworks from his hands, he is well-lit with spotlights as opposed to mostly being in shadow before.

During “The Lion King” segment, the lasers are in full force, and the colors are more vibrant.

The biggest change to this scene is Rafiki on the stage instead of on a boat.

Instead, there are three boats with two monkeys each.

The “bubble” portion uses the same footage with added projections of bubbles on the sides, which change color. The line of fountains just in front of the stage is utilized for “Be Our Guest” (in red) and “Under the Sea” (in blue).

The original “Pocahontas” scene with Governor Ratcliffe and the colonizers has been removed.

Instead, Pocahontas peeks out from the water screen before we see video of her running.

She appears on the right side of the mountain and performs part of “Just Around the Riverbend.”

Leaf projections play across the mountain and water screen though “Colors of the Wind” is not featured.

A new video compilation of “heroic moments” projects images including Tiana and Naveen dancing, Tarzan swinging, Mirabel looking at the camera, and Mulan cutting her hair and wiping the makeup from half her face. When that image fades, the lights come up on the stage to reveal a new set with Mulan and Li Shang practicing in the center.

The whole stage is bathed in red, and the lasers draw an image of a dragon on the mountain.

“I’ll Make a Man Out of You” plays as they spar, and images from the movie’s training montage flash on the water screens.

It goes dark before lights reveal Aladdin climbing the left side of the mountain.

He checks that his stolen loot is secure before proceeding, and the vendors he stole from pursue him with swords.

“One Jump Ahead” plays until he jumps off the mountain. He appears alone a moment later and sings the “They’d find out there’s so much more to me” line from the reprise as stars glitter on the mountain.

The lights fade before Elsa rides the Nokk across the water screens. She appears at the base of the mountain in her pants outfit, bursting into “Show Yourself.”

The screens show images of her mother from the same scene in “Frozen 2” and create the element diamonds. The lasers shine above the mountain in blues and purples.

At the climax of the song, Elsa is obscured and reappears with a flash in her off-shoulder dress. After she finishes the song, it goes dark again before Gramma Tala’s manta ray form swims across the water screens. They show images from the “Know Who You Are” scene as the song plays. Moana appears on the ground to the right of the mountain, picking up the song from her first line.

She moves down and seemingly steps upon the water, sending colorful lights scattering into spots across the lagoon.

The fountains create waves for the manta ray to swim across as Moana travels up onto the stage in front of the mountain.

She reaches the left side to declare “I am Moana” in a spotlight before the lights fade, revealing the bright green glow of the Heart of Te Fiti.

The water screens play a montage of more heroic moments as the song plays out. We see Hercules with Megara, Tiana, and her mother, Tarzan and Jane, Quasimodo smiling, and finally, Mirabel opening the door to the rebuilt Casita.

The lights go out, and lasers create a trail of pixie dust across the sky. Tinker Bell flies around and brings the show to the Princess segment, where the original Pocahontas scene would have ended.

The montage of projections kicks off with Tiana and Naveen, but that’s the only change. The boats cross to the medley of songs from “Beauty and the Beast,” “The Little Mermaid,” and “Snow White.”

The only change to the floats and characters is that Ariel’s tail is more blue than gold.

When the Evil Queen takes the stage, red lights crawl on the mountain.

The cauldron has more red lighting, and no fire bursts from the sides of the rim. When the Queen turns into the Old Hag, she is bathed in green lights.

Lasers create “lava” on the mountain, and the ground on the sides of the stage as Jafar’s snake form moves about. Mickey has a new, scared expression.

Not much changed in the snake or Chernabog scenes aside from some additional colorful lighting.

The final showdown between Mickey and Maleficent is better lit than before but otherwise the same.

The steamboat has spiraled, twirling fireworks as it comes out. The character lineup onboard is different. All the new characters, like Moana and Elsa, have joined. Lilo, John Smith, and Baloo are all absent. Mulan is in her warrior outfit instead of the dress.

For the grand finale, Disney went heavy on the lasers. Projections have been added to the mountain as well, but the pyrotechnics and scene remain otherwise unchanged.

Watch our video of the full show below.

MagicBand+ did interact with the show. Stay tuned for more details.

What do you think about all the changes to Fantasmic!? Are you going to see them yourself? Let us know in the comments.