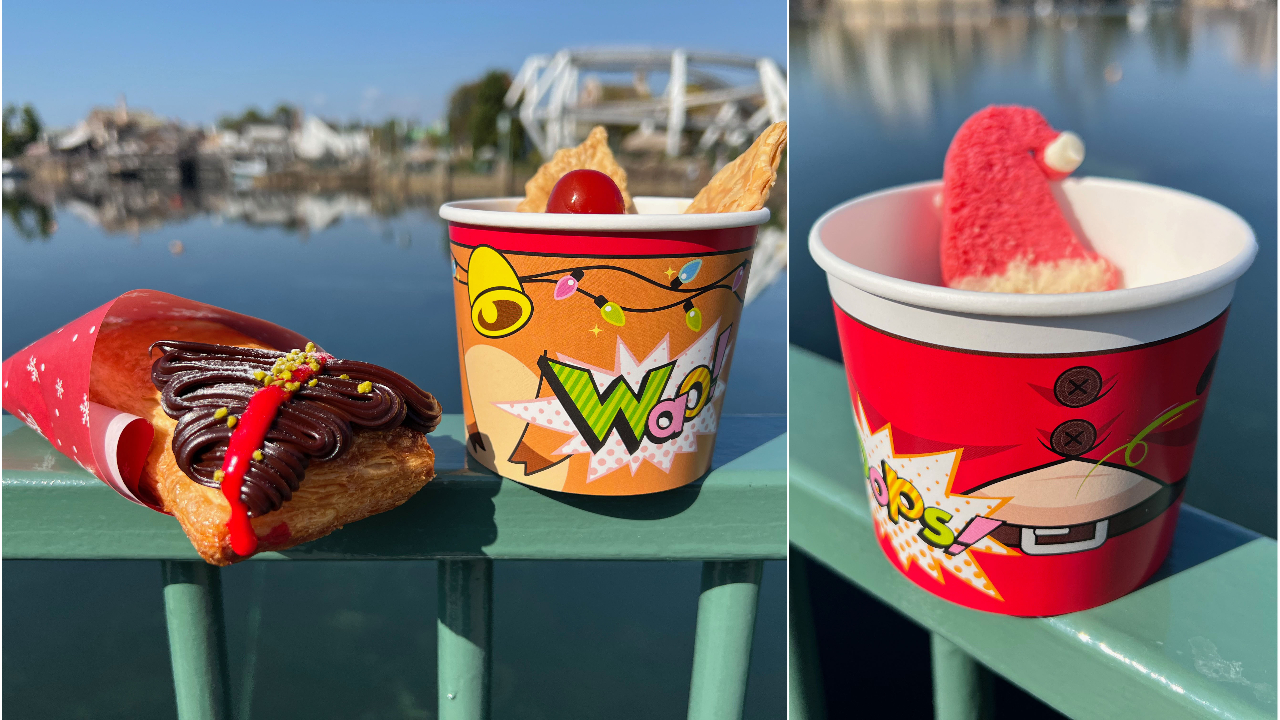 We’re always big fans of the seasonal treats that come to NO LIMIT! Market, the string of street food booths at Universal Studios Japan. So when we heard there was new food to try just for the holidays, we rushed straight to Osaka to get a taste for ourselves. Join us as we sample some of this cute and jolly fare!

At the furthest truck down the market, we found this chowder.

It’s so hearty that Santa’s shirt buttons are popping right off!

The soup itself is surprisingly delicious, and would be perfect for the cool days to come later in the season. Unfortunately, we were eating this when it was still unseasonably warm outside. But the chicken within is juicy and tasted freshly-cooked, surprising for theme park food. The cream itself added a light flavor but kept the noodles and chicken within from getting dry. The bread hat on the other hand was quite flavorless, and tasted like it had been out for a while.

Nonetheless, we would absolutely recommend this for anyone visiting during the holidays.

Themed very obviously to Rudolph, the packaging features cartoon reindeer designs as well as Christmas lights. Inside two cracker wafers represent his antlers, and a cherry tomato for his iconic red nose.

It takes a cute picture for sure, but that’s really as much positivity as we can lap on this dish. Omurice is already among our least favorite dishes in Japan, and the blandness of the rice combined with a disappointing sauce and flavorless burger patty makes this a wash. The fact we waited an hour for this due to understaffing also doesn’t help, but it genuinely just isn’t good. A hard pass from us for sure.

Unlike the other dishes, this isn’t designed to take a cute photo. But boy does it make up for that!

The pie itself is wrapped in a flaky and buttery croissant crust which was almost French quality outright. Dark chocolate icing sits on the edge where there’s no filling otherwise, which is incredibly rich and delicious. Inside the pie itself, the apple pie filling has a bit of sweet pistachio cream. Fortunately it doesn’t detract at all, complimenting the very hearty apple pie with thick fruit chunks in a toasty sauce. This was an absolute win, we highly recommend you get one. Even if the wait is an hour!

All three of these items are available through January 6 as part of NO LIMIT! Christmas at Universal Studios Japan, don’t miss the wintry food you can only chow down on across the park at Super Nintendo World, and let us know what you think in the comments below!