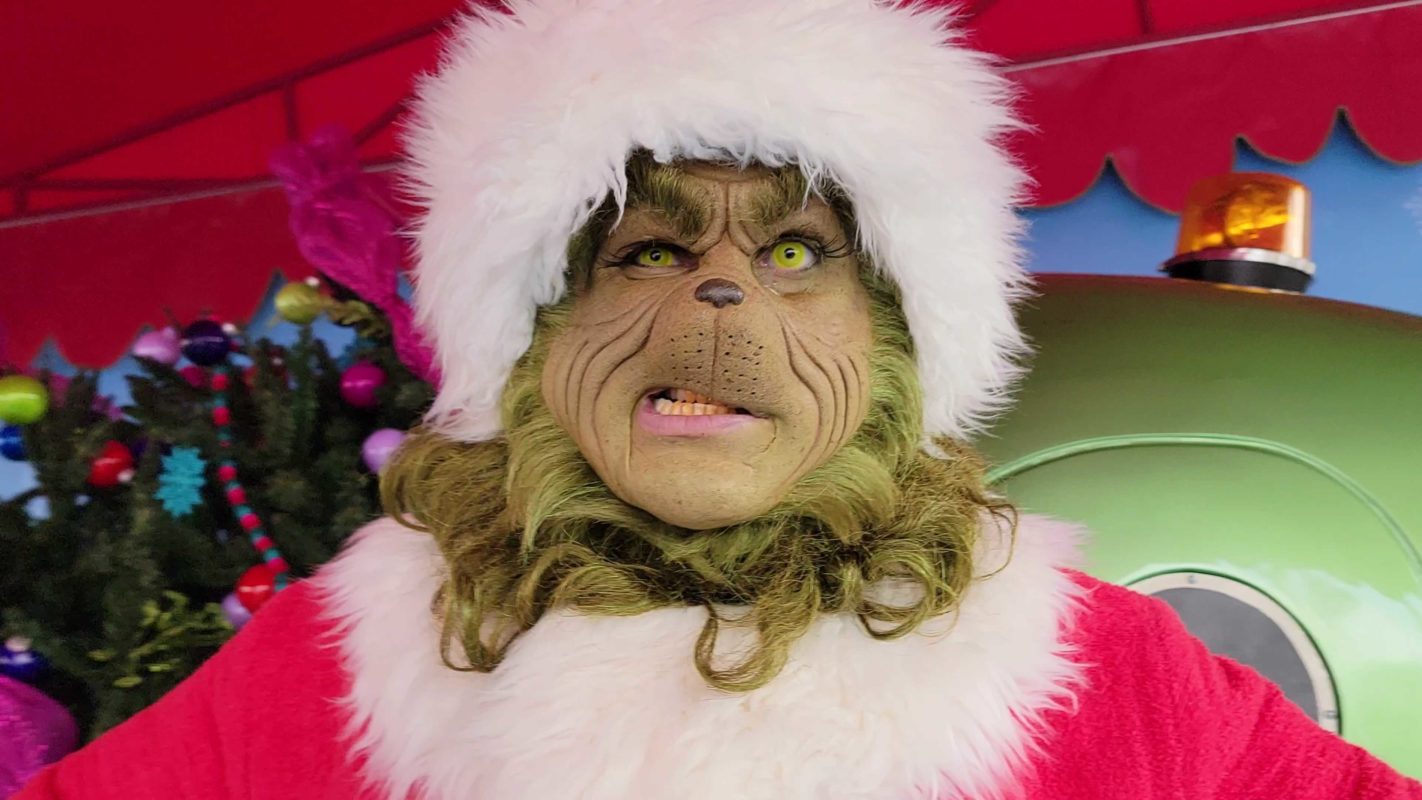 As you might expect, the opportunity to meet The Grinch creates a long queue. People find themselves wanting to see the mean one up close for some reason. This meet and greet area functions primarily as an opportunity for a photo with The Grinch, with each group receiving some time to be ridiculed by Mr. Grinch (or is it Mr. The Grinch? He never gives a serious answer).

As opposed to the less desirable virtual line system at Universal Orlando Resort, guests in Hollywood wait in a standard queue. With this system, as long as you do not get rained on or melted by the California sun, you will eventually get to see The Grinch. Our skilled reporter waited a significant amount of time in the queue to meet The Grinch. Still, he met him in all his glory.

The Grinch does not behave like your average costumed character in a theme park. He appears to dislike people. Even though his heart “supposedly” grew three sizes, he struggles with change. If meeting the mean one himself, you should expect some frowny faces, ridicule, and frustrated looks. The frustrated looks will happen no matter what you say. In the end, he might show you his best side.

If looking to have a fun time with this mean fellow, this interaction creates a nice memory as well as an enjoyable photo. Still, be prepared for the full Grinch performance when you see him. You should expect to be rushed through this interaction due to the potentially large number of people waiting.

We suggest you take your time while meeting him. Yes, you should respect others’ time, but if you want to ask and see something from The Grinch, this is your chance. If you want a video to cherish, have your best annoying question ready for The Grinch. Also, do not forget to have the camera rolling. We suspect he will love that. Okay, he’ll hate it, but what else is new?

Guests line up to meet the adorable Max. Fortunately for Max, and maybe you, Max’s location sits away from “The Green Meanie.” If your conversation with the one who attempted to steal Christmas made you want to cry, Universal Studios Hollywood offers a comforting solution. Max will make you smile. His highly decorated Christmas themed area adds to the power of his cuteness. Max comes out from his doorway to see his adoring fans. Of course, Max has his reindeer antlers on for your photos.

In addition to these scheduled staged character interactions with The Grinch and Max, the “Whos” will be roaming the Grinchmas area periodically. If you find yourself in the right place at the right time, you could meet The Mayor or Martha May, for example.

For fans of Dr. Seuss, Who-ville, and even the Grinch himself, Grinchmas offers many ways to play in that world at Universal Studios Hollywood. Which character from “The Grinch Who Stole Christmas” would you like to meet first? Let us know in the comments below.