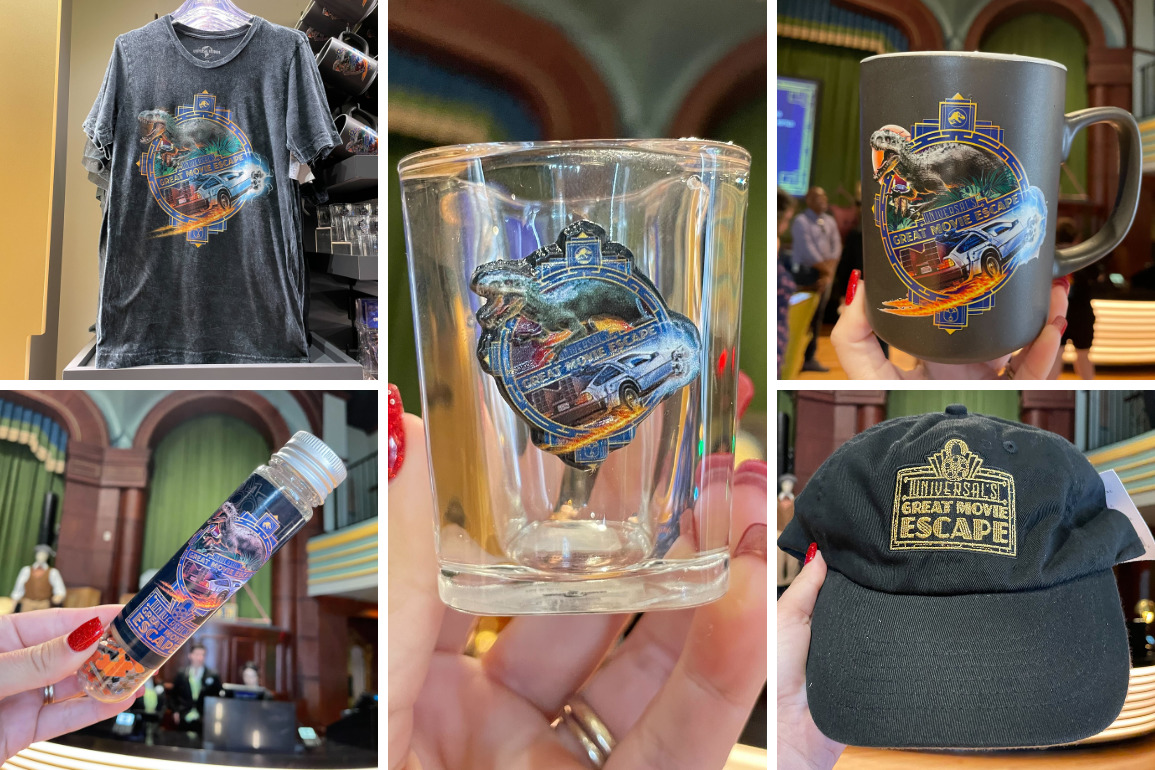 There are two escape adventure options — Back to the Future: OUTATIME and Jurassic World: Escape. Both are featured on all the merchandise.

Most of the merchandise features the same logo with an art deco-style frame surrounding the Indominus Rex and the Delorean time machine. The Universal’s Great Movie Escape text logo goes diagonally across the frame.

The t-shirt is faux-distressed black with a crewneck.

The back of the t-shirt is plain.

The black ball cap features the other logo for the experience, with the Universal’s Great Movie Escape text surrounded by an art deco theater marquee. A film reel sits atop the frame.

The design is embroidered in golden thread.

It has a buckle-style adjustable closure.

A black, zippered, hooded sweatshirt is also available. The text logo is on the front left breast.

It has two large pockets on the front.

The back of the sweatshirt has the Back to the Future/Jurassic World combination image.

The sweatshirt is fleece.

A maze-like design runs down the length of the right sleeve, ending in the film roll marquee.

A black drawstring bag matching the hoodie is also available.

One side has the same image with the Indominus Rex and Delorean.

The back is blank with a hoodie-style kangaroo pocket.

A puzzle of the attraction’s artwork and logo can be found in a vial-shaped container.

The cap lets you know this is a micro puzzle.

Here you can sneak a peek at some of the tiny pieces.

It features the same artwork.

The keychain is a little punny, being that it resembles a key. Though the Universal’s Great Movie Escape experience rooms do not feature locks and keys, this is a nod to the nature of original escape rooms.

The set comes with two wooden magnets. One features the Indominus Rex and Delorean art while the other features the theater marquee-style logo.

This toothpick holder (or shot glass) is clear glass with the pictorial logo on one side.

You can also get a black ceramic mug with the Universal’s Great Movie Escape emblem.

The other side of the mug has the blue and gold text logo as well.

The rim is gray but the interior matches the black exterior.

Stay tuned for full reviews of both escape experiences and all the drinks at the indoor bar at Universal’s Great Movie Escape.