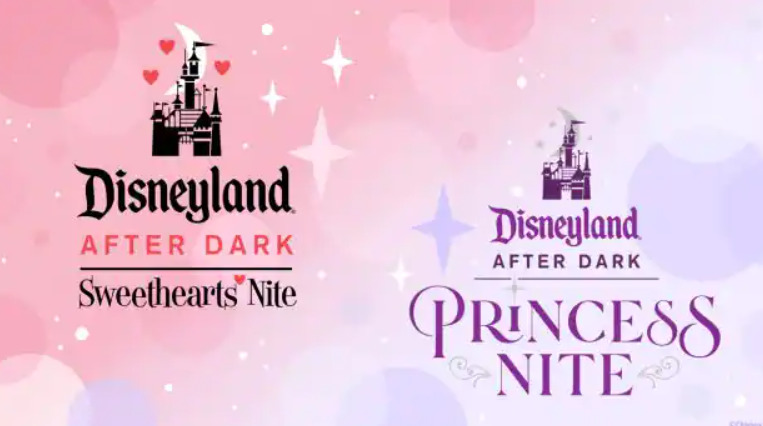 Disneyland After Dark, a separately ticketed event, will return for 2023 with a new Princess Nite themed event.

Disneyland After Dark begins with a three-hour pre-party mix-in from 6 p.m. to  9 p.m. PT at Disneyland park, then the private party begins from 9 p.m. to 1 a.m. PT. At each of these events, you’ll receive unlimited digital downloads of Disney PhotoPass photos taken during the party, plus commemorative keepsakes, including a souvenir credential and event guide map.

Sweethearts’ Nite will take place on seven different “date nights” in Disneyland park – the most ever for a Disneyland After Dark event. Celebrate the love of your life, your best pal, or cherished family at the event. The following offerings will be available:

Here are the prices for Sweethearts’ Nite:

Disney describes Princess night as a “celebration under the stars where adventurous heroines and aspirational hearts unite! With shimmering décor, special photo opportunities, themed food and beverage offerings, commemorative keepsakes, and characters galore, you’ll be ready to step into your own adventure of bravery and grace.”

The event will include the following:

At this time, no other events have been announced. It’s unknown if Star Wars Nite or Villains’ Nite will return in 2023.

Curbs Removed From Center Street at Magic KingdomMay 26, 2022
Florida Mother Gets Too Drunk at T-Rex Cafe in Disney Springs, Gets Hospitalized, and Abandons ChildMay 26, 2022
PHOTOS, VIDEO: The Groovin' Alps German Percussion Band & Their Spoons are Back with a Smack at ...July 16, 2022