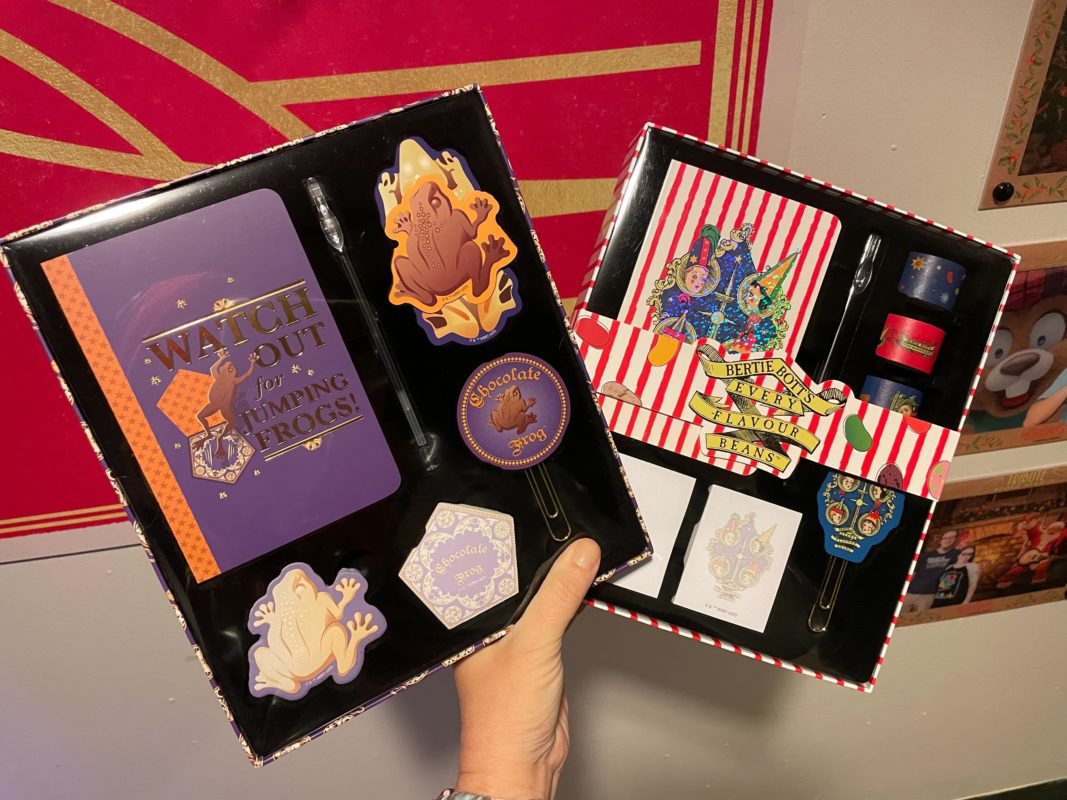 Two new stationery sets are bringing more Wizarding World magic to Universal Orlando Resort. Whether you prefer Bertie Bott’s Every Flavour Beans or a Chocolate Frog is more your style, both of these new stationery sets we spotted inside the Tribute Store at Universal Studios Florida are sure to be a sweet addition for any Harry Potter fan.

This new stationery set features all things Bertie Bott’s Every Flavour Beans. A journal features the logo artwork featured on the candy’s packaging throughout the Wizarding World of Harry Potter on top of imperfect red and white stripes that match the box. The cutout shape in its center features the vintage-looking characters featured on the side of the box surrounded by a victorian-era frame and covered in glitter.

Next to the journal, this stationery set offers a clear pen and three rolls of themed tapes. The blue roll up top features a bundle of Every Flavour Beans. The middle roll offers a vintage font and ribbon logo, while the bottom roll of tape is designed to feature the vintage characters from the Bertie Bott’s packaging and its logo.

An oversized paperclip bookmark is included. The cutout shape features the vintage-looking characters featured on the side of the box, once more, surrounded by a vintage font and a victorian-era frame. “Bertie Bott’s Every Flavour Beans” is written on the ribbon along the bottom of the blue graphic.

If this stationery set catches your eye, new Bertie Bott’s Every Flavour Beans pins and keychains are also available at Universal Orlando Resort.

A Chocolate Frog Stationery Set has also hopped onto the shelves of the Tribute Store. The purple journal is themed to match the sweet treat first seen when Harry meets his future best pals in “Harry Potter and the Sorcerer’s Stone.” In keeping with its inspiration, this Chocolate Frog journal features an orange star-lined spine. A chocolate frog jumps out from the ornate pentagonal packaging at the journal’s center, and “WATCH OUT for JUMPING FROGS!” is printed in golden foil from top to bottom.

A series of Chocolate Frog stickers are also included in this set, alongside a clear ink pen. Just below, an oversized paperclip bookmark features a chocolate frog, and text declaring it so on top in a purple circle.

Two notepads finish off this set, including a chocolate frog-shaped pad with orange frogs in a purple border. The second notepad is roughly the same size, but features a more transparent, pentagonal Chocolate Frog packaging.

Whether you prefer Bertie Bott’s Every Flavour Beans or a Chocolate Frog is more your style, both of these new stationery sets are sure to leave any Harry Potter fan with a watering mouth. More merchandise has also been uncloaked across Universal Orlando Resort shops recently, featuring more of the many sweets and treats of the Harry Potter franchise.

Did any of the items we found across the shops of Universal Orlando Resort catch your eye? Let us know what Wizarding World merchandise you’d like to see offered next!