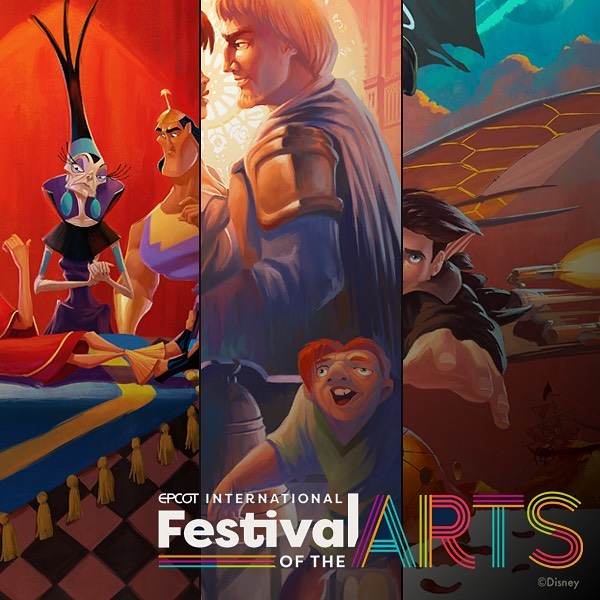 Brett Owens, a Disney Fine artist and graphics designer with Disney Live Entertainment, has posted previews of several new artworks that will debut for the 2023 EPCOT International Festival of the Arts. Poster-style art will be available featuring “The Hunchback of Notre Dame,” “The Emperor’s New Groove,” and “Treasure Planet.”

“The Hunchback of Notre Dame” Poster

The poster-style art of “The Hunchback of Notre Dame” features Quasimodo with Victor, Hugo, and Laverne in the forefront. Judge Frollo is in the background, against the towering Notre Dame. Esmeralda and Phoebus embrace in the upper left of the poster.

Owens did not say which specific classic movie poster inspired this design, but it features styles common to the 1930s and 40s.

The art for “The Emporer’s New Groove” was inspired by the poster for “Cleopatra” (1963). It features Kuzco reclining while Pancho, Yzma, and Kronk regard him with varying disapproving expressions.

Owens noted that he was sent “so many requests” for a “Treasure Planet” piece, and wanted to give protagonist Jim “some love.” Captain Amelia and Doctor Doppler are in the middle with John Silver looming in the background. In the forefront, Jim is on his solar surfer, reaching out for Morph, who is disguised as the map.

Owens also shared his signing schedule. His booth will be in the France Pavilion, and he will appear on the following dates: