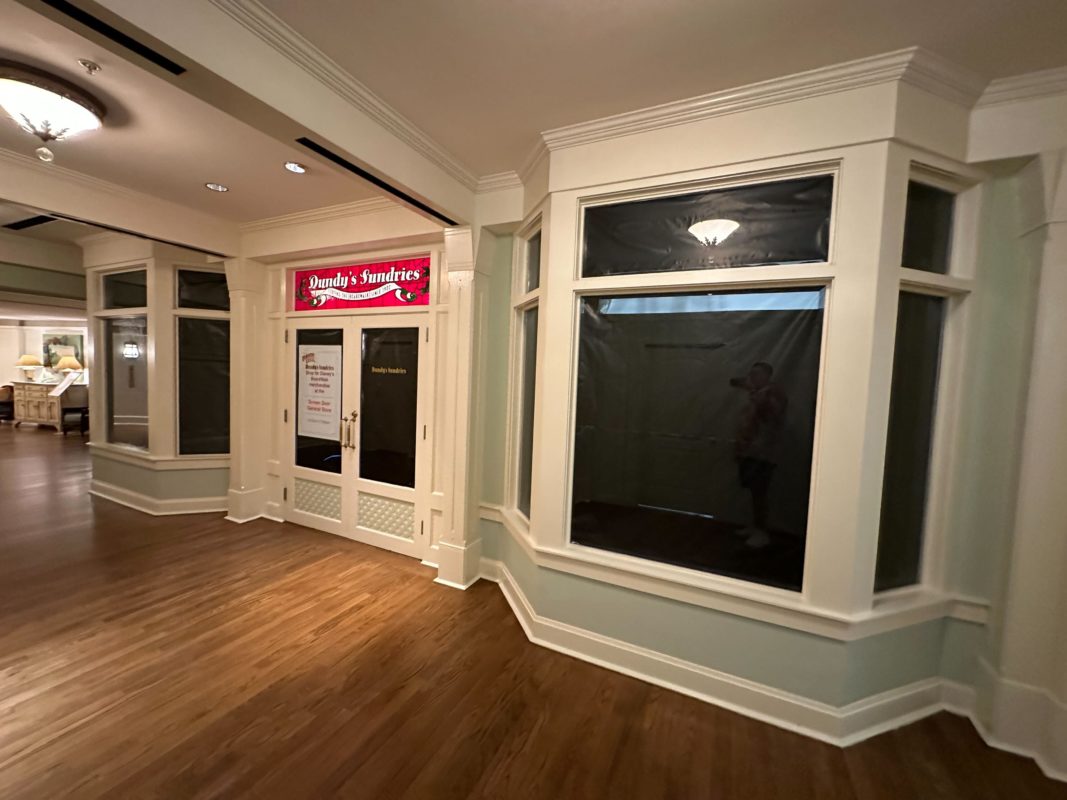 Construction walls have gone up around a former bell services counter near the site of the former Dundy’s Sundries as development begins for Carousel Coffee, coming to Disney’s BoardWalk Inn in 2023.

A new quick-service bakery, Carousel Coffee, is the latest new dining option under construction at Disney’s BoardWalk Inn Resort, located in the EPCOT Resort Area. Dundy’s Sundries closed permanently on October 3 to prepare for the coffee shop to take its place. Now, construction walls have gone up at a former bell services counter in the resort’s lobby and across the hallway of the former gift shop, presumably to make way for additional seating for resort guests patronizing the new Carousel Coffee shop.

Carousel Coffee will feature specialty Joffrey’s iced and frozen coffees with seasonal flavors, alongside Pomegranate-Green Tea Lemonade, Crunchy Raspberry Danishes, New Jersey Crumb Cake, and a number of other specialty pastries and snacks available for quick service. We got a first-look at some of the shop’s offerings earlier this month.

In keeping with the resort’s theming, modeled after turn-of-the-century boardwalks in such coastal cities as Coney Island and Atlantic City, the Carousel Coffee shop is expected to be a charming addition to Disney’s BoardWalk. Due to the closing and ongoing replacement of Dundy’s Sundries within the lobby, guests can now find any merchandise on-site at the Screen Door General Store.

Carousel Coffee is the latest dining service to be developed at the BoardWalk Inn Resort. But it’s not the only project we’re checking on today!

The ESPN Club was demolished at this Disney Vacation Club property this summer to make way for the future Cake Bake Shop, coming to BoardWalk in early 2023. The ESPN Club opened at Walt Disney World in 1996, and for the better part of 25 years served as the best place on Disney property to catch big sporting events.

Demolition of the ESPN Club is still underway. More pieces of the overhanging section have been removed as more of the gutted interior becomes visible.

The Cake Bake Shop is slated to open in early 2023.

These new additions will join the BoardWalk Deli, which opened during the summer of 2022. More developments and refurbishments are expected at Disney’s Boardwalk Inn in the new year, including anticipated updates to the resort’s lobby, lounge, and guest rooms.

Are you excited for these new eateries? Let us know in the comments below!