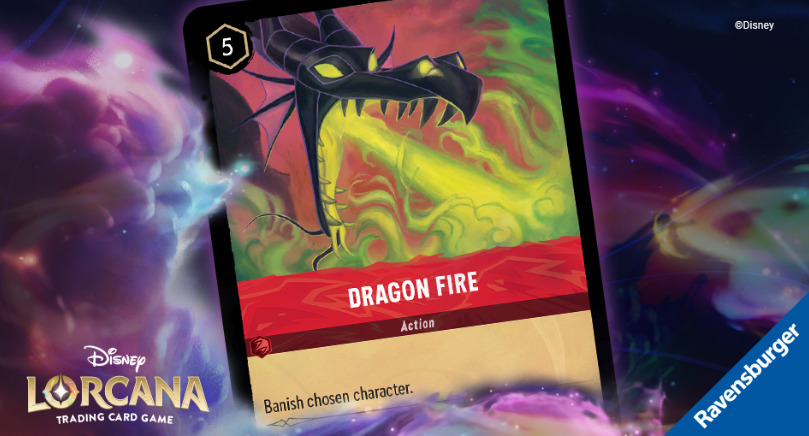 Disney has revealed a new game card for the upcoming Disney Lorcana game. The new game card, revealed by Ravensburger, is Dragon Fire, which features the dragon (Maleficent), spewing fire from its mouth.

The new card for the game, which is expected to launch in the fall of 2023, is a new Action card and will appear in the initial Disney Lorcana set.

According to Comicbook.com, the specific game mechanics have not yet been disclosed, but the Dragon Fire card allows the Illumineer (the Lorcana player) who played it to banish a selected character when the card is played. This is the first time an Action card has been revealed for Disney Lorcana, and no other mechanics have been provided at this time.

This past September at the D23 Expo, Ravensburger revealed their first six Disney Lorcana trading cards. They were made exclusively available for fans during the Expo.

We previously reported that gameplay for the game would be revealed in spring 2023 and that there would be additional news and announcements leading up to that time.

Nive’s Nerd Corner shared on YouTube that players can have up to two “inks” in their deck – amber, amethyst, emerald, sapphire, steel, and red.

“I always say that making games is kind of like that feeling you get when you bought someone a gift, and they haven’t gotten it yet, and you’re excited for them to open it,” veteran game designer Ryan Miller told Comicbook.com. “It’s that kind of excitement that I feel every time I work on a game, and I’ve never been more excited about any game I’ve worked on before Disney Lorcana.”

Are you excited to start playing Disney Lorcana? Let us know in the comments below.