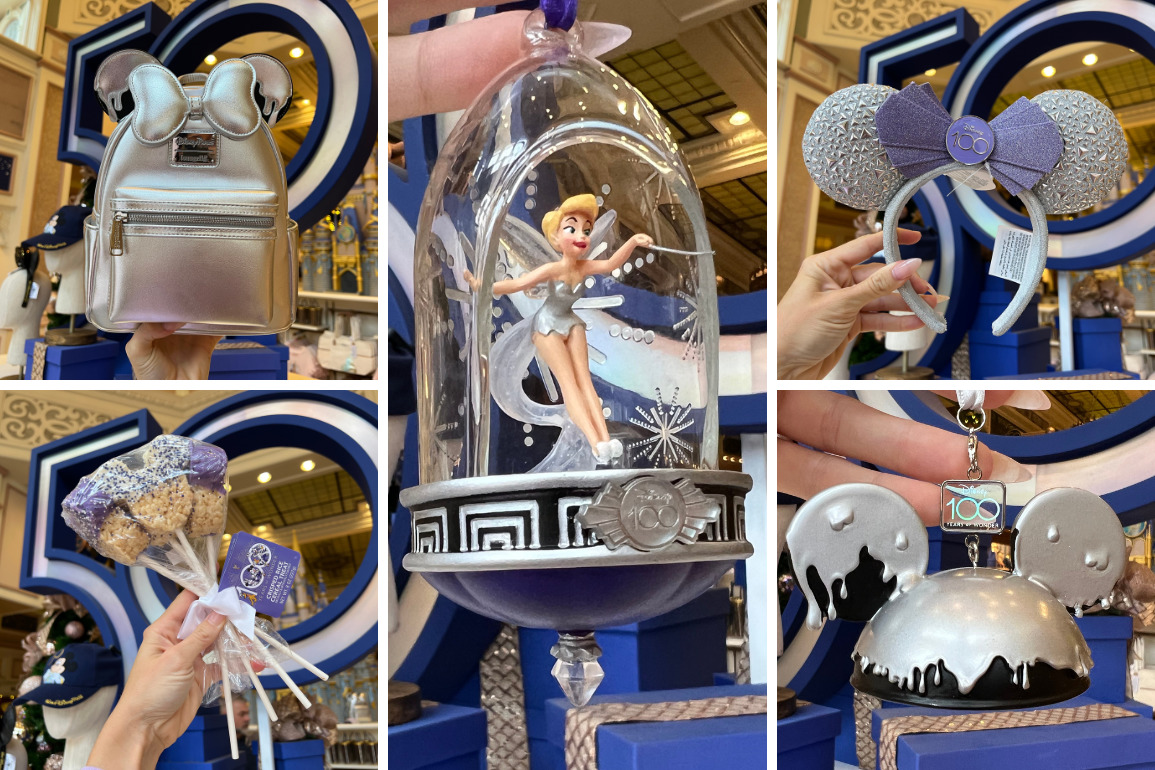 The 100th anniversary of the Walt Disney Company is in January 2023, but the Disney 100 Years of Wonder merchandise collection arrived this morning at Walt Disney World.

We first found it in the Emporium at the Magic Kingdom.

The Loungefly backpack is nearly entirely silver, to represent the “platinum” anniversary.

It has a Minnie bow on the front above the Disney Parks x Loungefly placard. Black mouse ears are affixed behind the main pocket with “dripping platinum” running down them.

The same effect is replicated on the straps.

The Disney 100 Years of Wonder logo is on the back.

The ears are also primarily silver, with the exception of the large lavender bow.

The bow is glittery and has an enamel “Disney 100” logo in the center.

The ears themselves are patterned with silver pyramid studs.

The back continues the same stud pattern.

The spirit jersey is a tie-dye-style with pink, blue, and purple pastels against a cream background.

In addition to the classic Spirit Jersey tag, the newest batch of jerseys have a Disney tag as well.

The back of the jersey features the Walt Disney World text logo in silver glitter.

At the bottom, the Sensational Six are in their 100th anniversary outfits against a silhouette of Cinderella Castle. The Disney 100 Years of Wonder logo is beneath them.

Your furry friends can join in with a matching pet Spirit Jersey.

It has the Walt Disney World logo on the top of the back, with Mickey against a silhouette of Cinderella Castle below.

It’s not too late to add a little Disney 100 Years of Wonder magic to this year’s tree (or just be ready for 2023) with new ornaments. The ear hat ornament features a clear square with the celebration logo above an ear hat.

Like the backpack, the ear hat ornament has “dripping platinum” running down the traditional black ear hat.

The bottom has the Disney 100 Years of Wonder logo.

Another ornament mixes it up a little with Chip ‘n’ Dale inside the zeroes of a 100 Years of Wonder sculpture. The base is purple and reads “Years of Wonder.”

The base has firework designs on it.

Tinker Bell is floating in a small glass case.

There are silver firework bursts on the glass and a Disney 100 medallion on the bottom.

A quartet of crisped rice Mickey-shaped treats are decorated in the purple and silver colors of the anniversary.

The popcorn is candied. It is not labeled with a flavor.

The white and silver limited release pin features the Disney 100 Years of Wonder logo with Goofy and Pluto popping through the zeroes.

A limited edition Cinderella Castle pin features Tinker Bell floating above the purple and silver castle. The Disney 100 logo is on the bottom. It has a limited edition size of 3,000.

A Minnie Mouse doll and accessories set is also available. Minnie is wearing a lavender dress with matching ears and purple heels. However, she comes with other outfits, including a 100 Years shirt, a black jacket, a silver skirt, and a denim skirt.

There are also silver heels, a black and silver purse, and purple and silver sunglasses.

A black t-shirt features the Sensational Six in their platinum anniversary outfits.

Each character is featured in their own art deco-style box.

Chip ‘n’ Dale are also on the shirt, appearing on either side of the Disney 100 logo.

The back of the t-shirt is plain black.

It has the Walt Disney World logo on the sleeve.