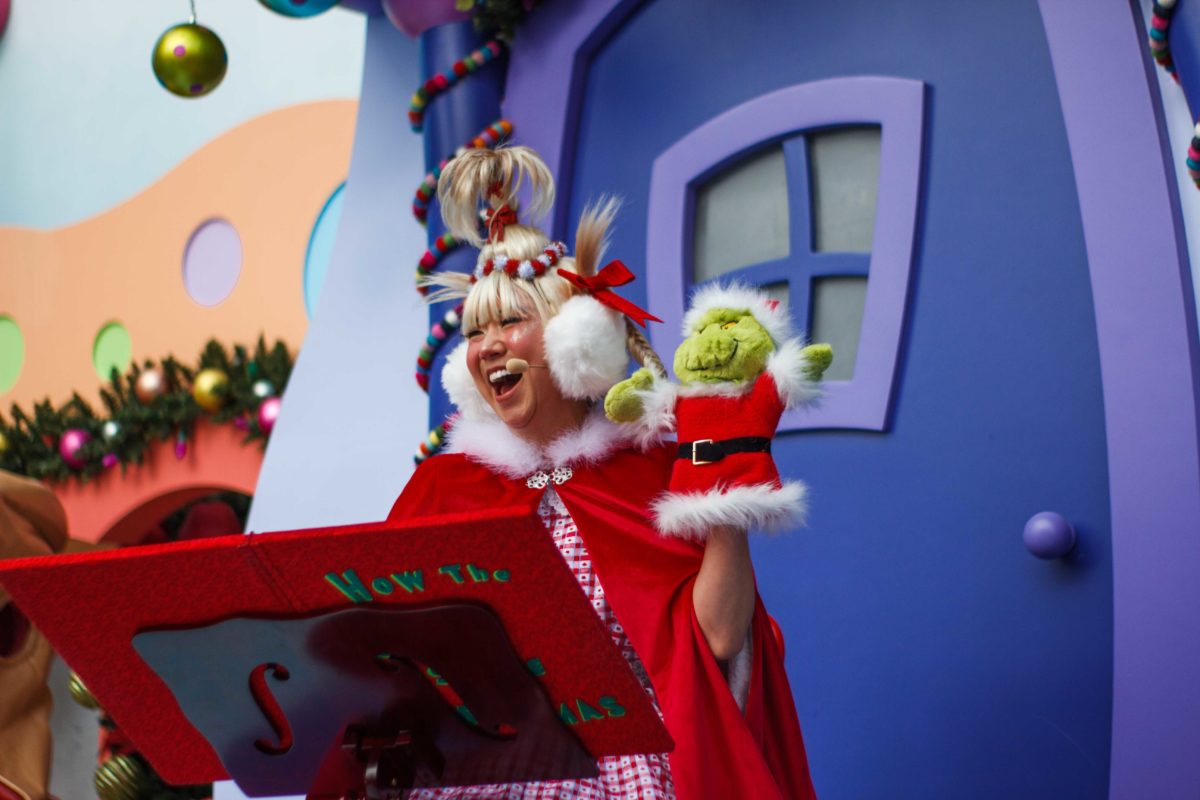 The annual tradition, Cindy Lou Who stars in telling the story of “How the Grinch Stole Christmas!” for this show. She comes out of one of the sets cheerfully prepared to read, arriving with a puppet. This puppet looks a lot like The Grinch in a Santa outfit. Guests and “Whos” alike gather round to hear this story.

The new aspect of this show revolves around the new sets created for this holiday celebration, giving the idea of a schoolhouse area for story time with Cindy Lou Who. This storytelling show happens several times each afternoon. The schedule will vary so check the sign as you enter the area for the daily schedule.

Guests of Who-ville receive a warm welcome from the “Who-ville Welcome Committee” show. This show comes to guests as a new addition to the Grinchmas shows. As this show begins, we meet our hosts, where they tell us that someone very important asked them to be there — The Mayor of Who-ville himself!

If you want to be a show participant, you should arrive a little early for this show. As per mandatory international theme park law, cute children receive priority in terms of audience participation.

However, towards the end of this show, a special honor will be bestowed upon you. I suggest you remember to say your name loud and clear then. Buttons will also be given out to children at the end of the show. They read “Citizens of Who-Ville” and have the year on the button also.

Overall, this show makes a nice addition to the Grinchmas festivities. This show happens weather permitting several times each afternoon.

In the plaza area, a tall tree resides for Grinchmas. This tree fits with Dr. Seuss theming well with some twists and turns as we look up to the star on top.  As the time for lighting the tree draws near, we get to enjoy some excitement from the Whos. For those of you familiar with the “Grinchmas Who-liday Spectacular” at Universal Orlando Resort, this tree lighting show features musical numbers like that show but in a shorter time frame.

With a little theme park magic, The Grinch makes an appearance at this event! It’s Grinchmas after all, have to figure he’d arrive at some point. The expected holiday hijinks ensue with the Grinch. After that, guests enjoy the Christmas tree lighting. We suggest you also stay until the end of the show for some holiday magic.

This show happens after dark as you might expect. This show, like all of these shows, happens weather permitting.

With the Grinchmas celebration in full swing, will you be venturing to see The Grinch? If so, let us know in the comments below. And don’t forget you can also meet The Grinch and Max at the park as well!