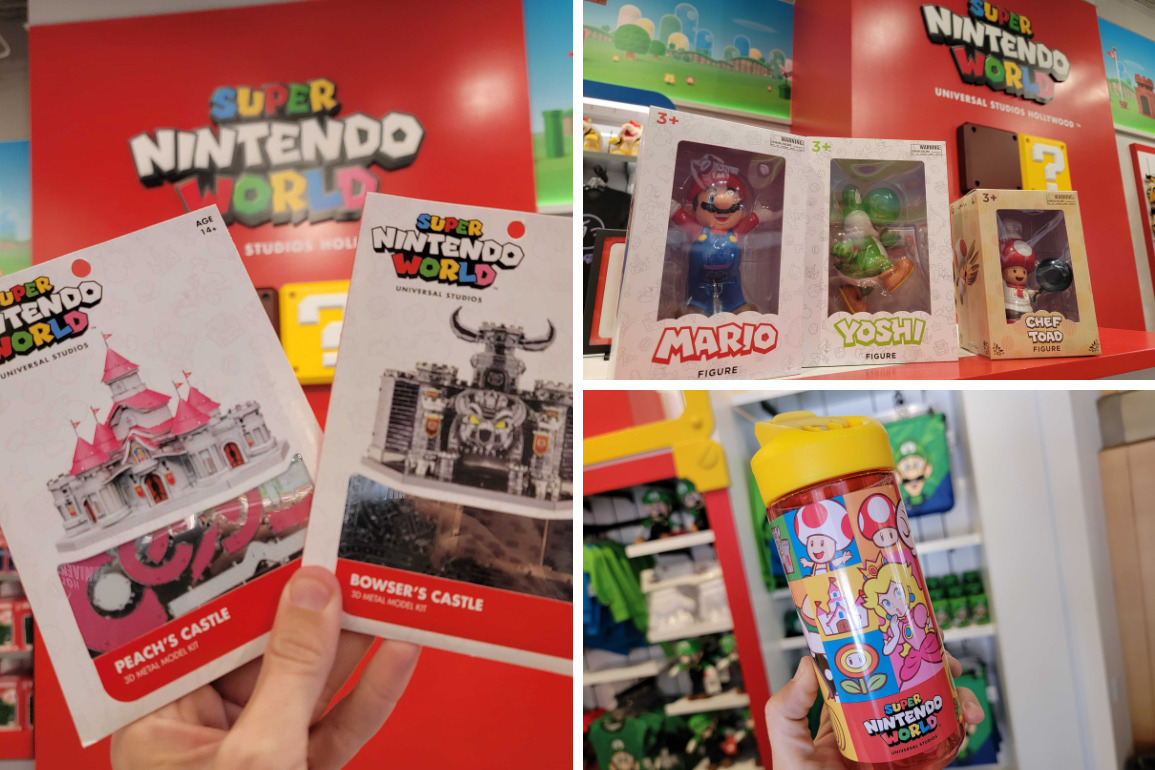 For fans of Nintendo games, Metal Earth created a model of Peach’s Castle. We located some in the Super Nintendo Store in CityWalk. Like this style of model, it consists of high-quality steel sheets. This model provides intricate details of the castle. The parts come cut from one or more 4” square steel sheets. The packaging advertises easy to follow instructions included with each kit. These models require no glue or solder to construct. The packaging shows the colors of this model.

If we look close at the back of the packaging, we can see Peach looking out from her castle. In addition, we see how the interlocking pieces come together. Yet, the packaging offers sound advice on how to assemble this model.

In contrast to Peach’s Casle, we also found a model of Bowser’s Castle. This Metal earth model displays a sharp color contrast to Peach’s Castle. As we might expect, the dark colors dominate this model. This castle looks like you should be preparing for battle as you approach it. The bright yellow eyes above the entrance to the castle look like something out of a scary movie.

Both of these models make great additions for fans of Metal Earth models and Nintendo products.

We located several new figures in the Super Nintendo Store in CityWalk.

The Mario figure features bright red lettering on the bottom in case we fail to recognize our favorite plumber. The figure offers other sharp colors expected with Mario such as red and blue. His distinctive black mustache can be easily seen also.

Taking a closer look, we can examine Mario who looks excited as always for his next adventure.

Underneath the figure, we can see a button or stand that shows Toad.

The side of the box shows our friend Mario in classic cartoon-like form.

On the bottom of the box, we see a large logo for Super Nintendo World with Universal Studios underneath.

The Yoshi figure shows Yoshi in an action pose running to our right. His green color stans out with one of this light-colored shoes in the air.

Like the Mario figure, we see a stand showing Toad underneath Yoshi.

In addition to those figures, we found a Chef Toad figure. This one show Toad hard at work.

This light-colored box contains Chef Toad waving a spoon and skillet around. His typical smiling looks can also be seen.

Like the other figures, we see a stand for this figure below.

Yet, unlike the previous two, this one has two cartoon-like images on the side of the packaging. On one side, Chef Toad looks to be about to need a clean-up team.

On the other side of the box, Chef Toad looks to have things back to normal in Super Nintendo World We wonder which of these happened first.

When placing all three figures side by side, you will notice that Chef Toad looks much smaller. Though that figure looks more detailed, the size might cause some to question paying same for Chef Toad as for Mario and Yoshi.

In the Mario Room of the Studios Store, we found a new Super Nintendo World water bottle. This plastic water bottle displays many of the Nintendo favorites.

As we turn the water bottle around, we see Bowser and his castle.

Toad can be seen as we continue to look around this water bottle.