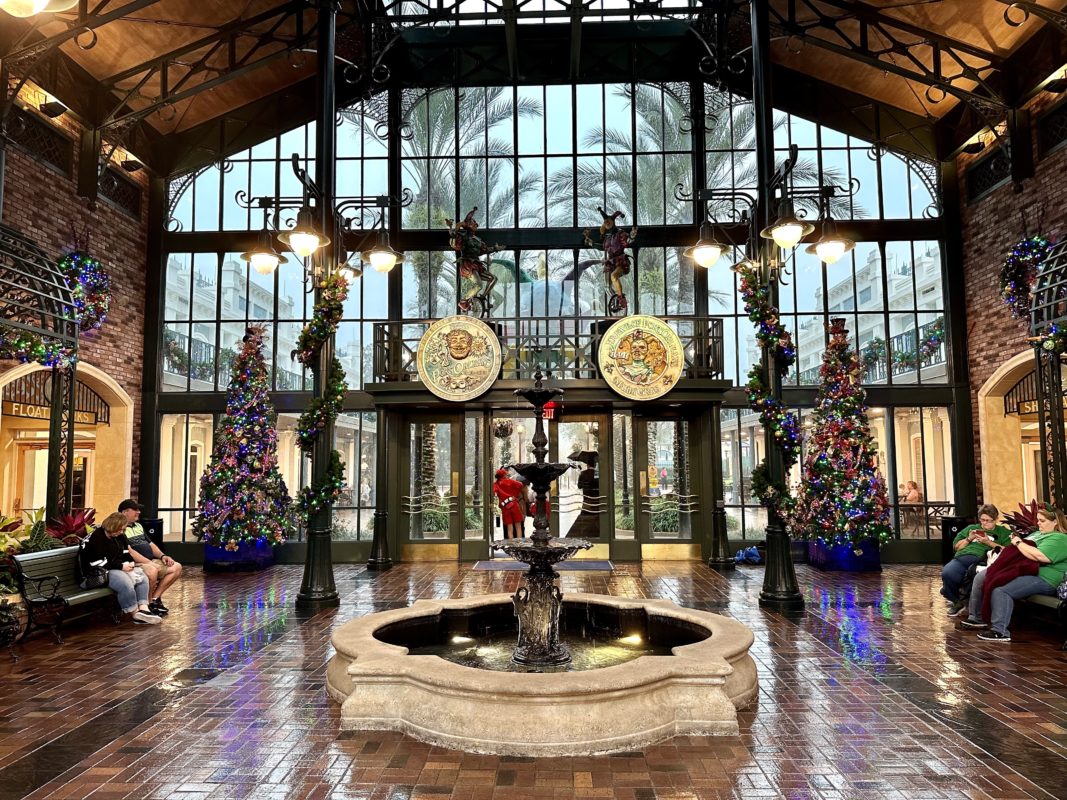 Good morning from a stormy Disney’s Hollywood Studios. Today a tornado watch has been issued for the Disney Parks. We were hoping the storms and rain would keep people away from the parks, but it’s very busy this morning. Today we’re planning on riding some rides and doing some shopping. We also plan on stopping by Disney’s Port Orleans Resort Riverside and French Quarter later today. Let’s get started!

First, we decided to do some shopping. A new “Star Wars” themed mug can be found in Celebrity 5 & 10.

We found the perfect stocking stuffer for Christmas. This foaming hand soap dispenser forms a mickey shape of soap in your hand. Not only will it make washing your hands more fun it also features Mickey and friends decorating a Christmas tree.

We spotted a Pixar themed mega figurine set featuring characters from “Inside Out,” “The Incredibles,” “Luca,” and “Finding Dory.”

More merchandise from the Disney 100 years of wonder collection has arrived. We spotted this Disney 100 lanyard in Mickey’s of Hollywood.

A new replica Stormbreaker electronic axe is available in Keystone Clothiers for $179.99.

There was also a more affordable foam toy version of the Stormbreaker for $29.99.

In Legends of Hollywood, we spotted some new Disney princess apparel. The first item is a Disney princess themed dress featuring items such as Cinderella’s slipper and Aurora’s crown.

There was also a Disney princess sequin cropped T-shirt and skirt. The shirt features Tiana, Snow White, and Ariel.

We found the most adorable diffuser in Once Upon a Time. This diffuser features Flower from “Bambi.”

Storm clouds were rolling in, and we thought it was the perfect time to ride The Twilight Zone Tower of Terror.

“We invite you if you dare to step aboard because, in tonight’s episode, you are the star, and this elevator travels directly to…the Twilight Zone.”

In Walt Disney Presents, costumes from “Willow” are now on display.

We have been noticing so many sales and deals in the Disney Parks recently, including this “Star Wars” droid factory advent calendar. The original price is $79.99, and it is now on sale for $39.99.

It’s time to head out of Disney’s Hollywood Studios.

Our first stop is at Disney’s Port Orleans Resort – Riverside.

The Christmas decor is on full display at the resort.

The centerpiece of the lobby is a beautiful tree.

Once upon a December, we spotted a new piece of merchandise that we were surprised to find. A new “Anastasia” mug has arrived to celebrate the 25th anniversary of the movie. One side of the mug features a portrait of Anastasia, and the other side is Dimitri.

Next, we stopped by Disney’s Port Orleans Resort – French Quarter.