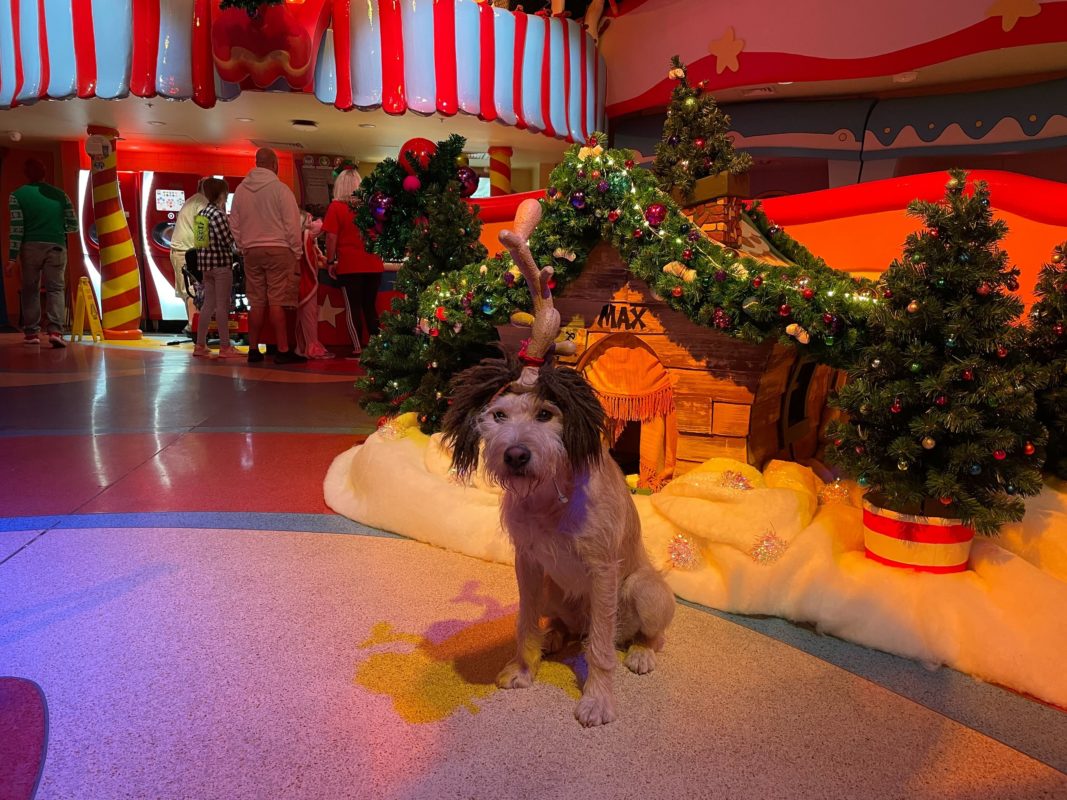 The Universal Holiday Tour has returned for the 2022 holiday season here at the Universal Orlando Resort with a lot of changes. Taking this tour has become a tradition for us each year and something we always look forward to. Unfortunately, this year’s tour comes with a lot of modifications, and most of them are not for the better.

Check in begins at 6 p.m., and guests are even encouraged to arrive early. Guests will check in along the pathway by the Hard Rock Cafe in CityWalk, which is very close to the entrance for the Grinchmas theater. The first difference we notice between last year and this year is that the parade viewing is not included in the tour. Last year, guests checked in for the tour inside the park and were given a wristband to access a viewing area to watch the parade. You could come and go as you pleased, grabbing food and drinks and getting settled in to watch the parade. This year, the parade is completely cut from the tour, so you may want to try to catch it before checking in. Don’t worry, you won’t miss anything if you arrive last minute.

Our first mistake of the night was when we decided to walk by the check-in area around 5:10 p.m. and noticed there was already a line forming. We decided it would be wise to get in line to check in early and joined the queue. This was a decision we would regret for the next 2 hours.

Team Members came around quickly and scanned park tickets, and checked your tour reservation on a tablet. Park-to-park tickets are required, but not included, so your park ticket will be scanned when you join the line in CityWalk. After verifying our reservation and scanning the tickets, it was probably around 5:20. This was when we were informed we would be seeing the 7 p.m. Grinchmas showing, so we asked if we could leave the line and come back, but were highly discouraged. We were told that the Team Members had already scanned our tickets and we should stay in the queue to avoid issues. At this point, the line had grown, and everyone else around us seemed to be getting restless as well. The parade music played in the distance, which is depressing when you’re stuck with a view of the side of Rip Ride Rockit. We asked again to leave the line to use the restroom and get water, but the Team Members told us there were restrooms by the theater and we would be allowed in that area at 6 p.m., so we reluctantly waited. Learn from our mistake and avoid lining up early for this tour.

The line eventually moved towards the theater around 6 p.m., where we would stand in line for the box office window to check in for a second time and get wristbands. There seems to be no explanation for why they wouldn’t have just handed out wristbands at 5 p.m. when they first started scanning park tickets and checking reservations and why we couldn’t have left and come back closer to the show. The standing around and waiting before the tour actually feels a bit excessive. Wristband distribution started after 6 p.m., and once you had your band, you were paired up with your tour guide. Followed by more waiting.

There are bathrooms by the theater, but the snack stand was completely closed up at this point in the night. There was no ability to purchase anything to eat or drink and no way to exit the area, so make sure you plan accordingly before getting in line. You will be trapped once you line up. At this point, we were feeling kind of miserable, but still making the best of the situation.

Now, guests are all divided up into small groups, and everyone is standing around with their guides. Here comes the small talk with other guests and a guide trying to hype up people who have been standing around for way too long. Luckily, we had a great group of people on our tour to chat with while we waited. Around 6:45, everyone was moved into the theater for the 7:00 p.m. showing of the Grinchmas Who-liday Spectacular. Now we finally feel like this tour is about to start.

On a positive note, this was by far the best seating we’ve had for a Grinchmas show. We had great seats and a perfect view, thanks to the tour. Unfortunately, we felt like we waited longer to get into the show on the tour than we would have as a guest in the park.

After the show, our guide took us back to Universal Studios Florida for our next stop at the Christmas tree and the Tribute Store. Last year, this part of the tour was much later in the evening for our group, and it felt like we had the park to ourselves. This year, it felt like we were just mixing in with the regular crowds around the tree. We were given some free time to wander through the Tribute Store before regrouping and heading over to ride Race Through New York starring Jimmy Fallon. We understand the reasoning for selecting this ride, but it really adds no value to the tour and just feels like more filler.

Some members in our party cannot ride the attraction, so we sat and waited in child swap with a couple of crying children who were already over this tour, too. The tour goes very late into the evening, so if you’re booking this as a way to meet the Grinch with children, be aware they may be falling asleep and/or cranky by the time you finally get to Seuss Landing. We would suggest the Grinch and Friends Character Breakfast as an alternative to this late night tour. It hurts to admit it, but we looked at each other and even considered walking out at this point, but we knew we had to stay for the review.

Now, the guides begin to lead their groups to the roof, where we all stood around and waited for our turn to see Santa.

So far, there’s been a lot of standing and a lot of waiting.

The view here is nice, but it was very crowded with so many other tour groups up here at the same time.

Once our group was called in to see Santa, we moved inside to a beautiful Christmas setup. A photographer is there to take a photo for you, and your guide will also be able to take your picture. Sadly, this meet and greet felt a little rushed this year. Another difference between this year and last year is the photo. Last year, the photo was printed for you, and you were handed a copy. This year, you’ll be handed a card to be able to view your photos later. Take our advice and snap a photo of the card once the Team Member hands it to you. If you’re like me, you’ll just stick it in a pocket and lose it before the end of the night.

The best parts of the night are ahead of us, though. The Grinch meet and greet in Circus McGurkus is probably the main reason we booked the tour. During the day, the Grinch meet and greet uses a Virtual Line, and it can be pretty tough to secure a spot. Booking the Universal Holiday Tour or Grinch and Friends Character Breakfast guarantees you will meet him, though. Now, we’re ready for some fun.

Last year, guests were given an exclusive “Who & A” question and answer session with the Whos of Who-ville. The improv-style comedy from the Whos was exclusive to the tour last year, but was completely removed for 2022. This year, guests can meet the adorable dog, Max. That’s right! Max has an exclusive meet and greet only available on this tour.

Once our guide lead us back over to Seuss Landing, we had an hour to enjoy snacks, the Grinch and Max, or wander the land and enjoy the rides in Seuss Landing. Obviously, a majority of guests are here for the Grinch, so Circus McGurkus is packed. There are even more changes from last year on this part of the tour, and we’re left with mixed feelings.

The highlight of the night for us was the meet and greet with Max. This was the most unique part of the tour since you cannot meet Max anywhere else. The tour has finally redeemed itself.

Now, here’s the downside. The Grinch was stationed in one spot, and guests were able to line up to meet him, but the line was really long. Last year, the Grinch roamed around and went from table to table, meeting every family. Having him stationed in one place means you’re going to have to stand and wait in line. We didn’t feel like standing anymore, so we didn’t meet the Grinch and opted to eat some snacks and meet Max instead. Having to line up to meet him isn’t ideal, but at least you have the option.

On a positive note, Universal has added an amazing variety of savory snacks to the buffet. Instead of just cookies and hot cocoa, guests can enjoy a nice variety of food. Grab as much as you like and chow down. There’s Who Hash, vegan tots, pizza tots, popcorn shrimp, and chicken and waffles.

Calamella’s Chicken & Waffles – With and Without Hot Honey

The tour is very long, so having some filling food halfway through was a much-needed improvement. In the past, this portion of the tour only included cookies and hot cocoa. The selection of savory snacks is awesome, so we welcome this change!

We were given postcards during the event, which has always been a thing each year. This is going to sound petty, but we were sad that the postcards aren’t stamped this year. Part of the fun was having a postcard with a stamp on it so you could mail it from Hogsmeade and get the special postmark. The Owl Post isn’t even open to buy a book of stamps. Bring your own stamp, a pen, and a friend’s address if you plan to mail the postcard from the park this year. There was also no ornament gift this year. These may be small things, but they really do chip away at justifying the value of this tour, especially for larger families.

The Magic of Christmas at Hogwarts Castle

The final stop of the night is to Hogsmeade for a showing of the Magic of Christmas at Hogwarts Castle. Our group was one of the first to arrive, and walking into the land after the park has closed is one of the most magical experiences you can have.

This is a fantastic opportunity to wander around Hogsmeade and enjoy the land without crowds. Bring your wand if you want to cast spells and get some great photos and videos. No shops are open during the tour, but the Hog’s Head is open and selling Butterbeer.

The evening concludes with an after-hours viewing of the Magic of Christmas at Hogwarts Castle. Guests can spread out and enjoy the show with low crowds. It’s definitely one of the highlights of the tour.

After the castle show, you’ll be escorted directly out of the park back into CityWalk. The tour ends around 11 p.m., so it is a very long night.

The Universal Holiday Tour is a lot of fun, but we were disappointed in a lot of the changes from last year to this year. It seems like a lot of things were cut, and the tour could have been condensed to avoid so much “free” time waiting around. Too many groups are in Circus McGurkus at the same time, rather than being spread out with an extra “activity” like last year’s “Who & A.”