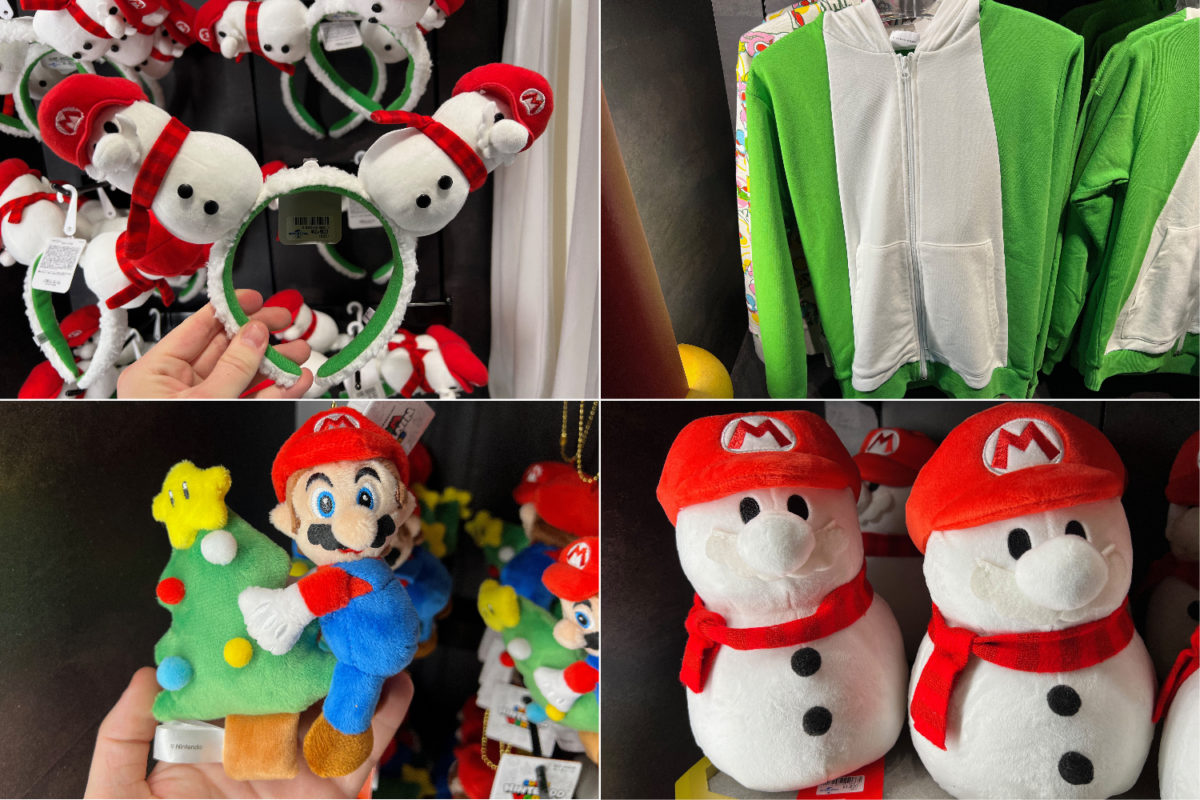 We’re wrapping up the last year of this being the only Super Nintendo World on the planet here at Universal Studios Japan, and the park is celebrating with a smattering of holiday offerings. And on our latest trip to the park, we saw some late additions to the Joyful Holidays line along with some other additions at 1-Up Factory! These join the first wave we found last month.

The tapestry comes with pins of Super Mushrooms and 1-Up Mushrooms.

There are also handy little sleeves to hang plush badges off the tapestry.

These little power-up plush badges feature both a bead string and a safety pin on the back. There’s one each for the Super Mushroom, Super Star, and 1-Up Mushroom.

This adorable new headband features Snowman Mario on both ears, a green felt interior lining, and fuzzy white lining outside.

Each ear has a Snowman Mario plush just like those we’ve seen throughout the line.

This plush version of Snowman Mario is much more reasonably sized than the giant cushion pillow from the original line.

He’s got a scarf tied around his neck and two buttons.

There’s also a small tag with the Joyful Holidays logo on it.

If you’re looking for an itty-bitty version of Snowman Mario, look no further than the small plush keychain!

There’s also a small tag attached with the holiday art and the Universal Studios Japan wordmark.

Mario’s grabbing onto this Christmas tree for dear life! The tree is also topped with a Super Star, quite fittingly.

It’s hard to call this a keychain based on its size.

It does come with a stuffed Christmas tree attached as well.

In the normal merchandise section, we found a new set of notebooks featuring Mario & Luigi, two Yoshis, and two Toads.

If you want to store those memories of your visit to Universal Studios Japan including the photos you took with Mario and Luigi here at Super Nintendo World, this photo album might be a great pickup.

And finally,t his green and white Yoshi hoodie is perfect for the chilly Osaka winter we’re currently facing.

The hood itself features a plush version of Yoshi’s face.

We found all of these at the 1-Up Factory shop within Super Nintendo World at Universal Studios Japan. But better hurry if you want to catch this holiday merch, it’s only in stock through the end of NO LIMIT! Christmas on January 9! Don’t miss the first wave of Joyful Holidays merchandise we found last month, as well as our review of the winter food over at Kinopio’s Cafe!