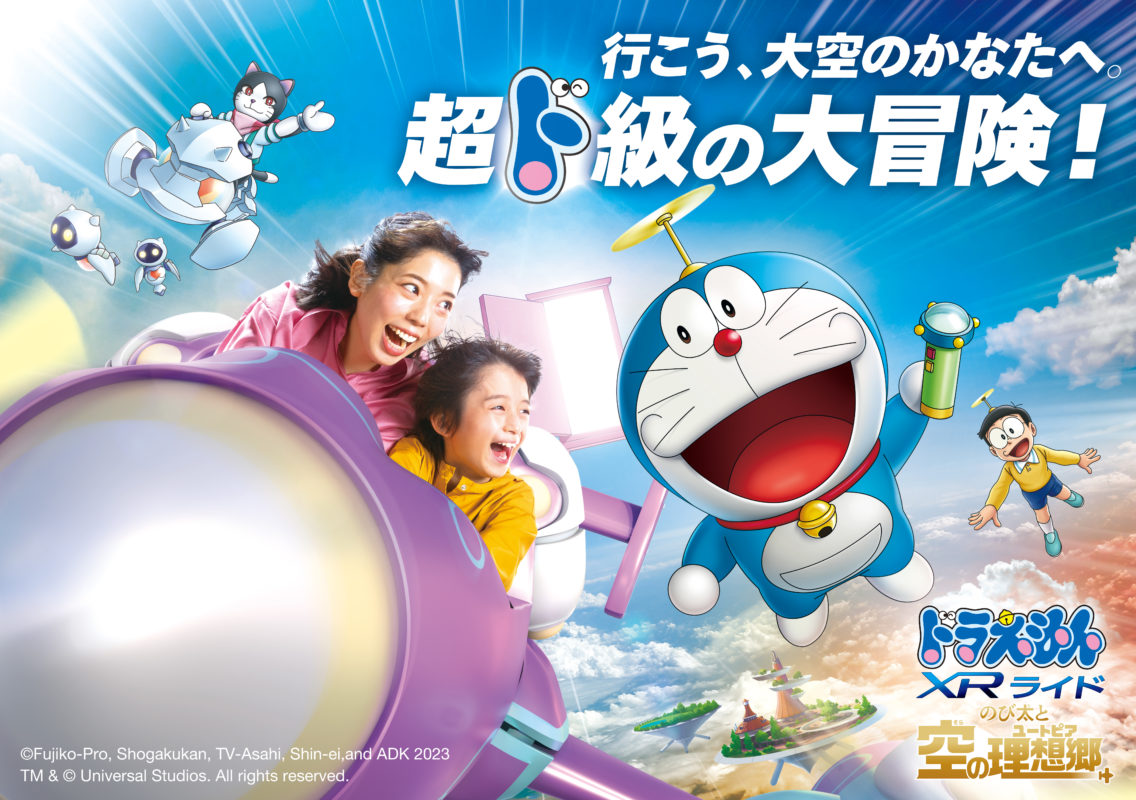 It’s that time of year again, when we lose the cult favorite Space Fantasy: The Ride at Universal Studios Japan to another virtual reality “XR” overlay. For the second time, the park is partnering with the Doraemon series to present Doraemon XR Ride: Nobita’s Sky Utopia, which will be available for guests from February through September of this year!

From February 23 to September 3, guests visiting Universal Studios Japan can enjoy the new Doraemon overlay. For those unfamiliar, these XR Ride experiences take over Space Fantasy: The Ride, giving guests a VR headset to wear while on the coaster. Back in 2020, guests were able to enjoy an attraction based on the film “Stand By Me Doraemon 2,” making this the second overlay themed to the blue robot cat from the future. This time, the film will be based on 2D animation rather than the 3D CGI models of the previous version.

The story goes that guests are on a tour with Doraemon and Nobita to “Paradapia,” a utopian society in the sky where everyone and everything is perfect. The tour starts with a cat-shaped robot “Sonya”, but a bounty hunter “Marimba” comes looking for a girl in Paradapia and interrupts the tour, saying that he has come to look for a girl in Paradapia. So you’re caught up in a high-speed chase that parallels Marimba’s quest to discover the secrets of Paradapia. Will you make it back safe? With Doraemon, Nobita, and trusty tools like the Anywhere Door and the Small Light, anything is possible!

The attraction is based on this year’s Doraemon film “Doraemon: Nobita’s Sky Utopia,” which releases in theaters in Japan on March 3. In the new movie, Nobita finds a mysterious crescent moon-shaped island in the sky and says, “That’s the utopia I’ve been looking for!” So, he sets off with Doraemon and friends in the airship “Time Zeppelin”, one of the robo-cat’s many secret tools, to search for the island! After scouring across time and space, they finally find a dream-like paradise where everyone and everything is perfect! There, they meet Sonya, another cat-shaped robot who is perfect in every way. Doraemon and Sonya become good friends, but there seems to be a big secret hidden in this paradise. Can Nobita and his friends solve the mystery of this paradise?

Will you be excited to ride the Doraemon XR Ride next time you visit Universal Studios Japan? Let us know in the comments below!