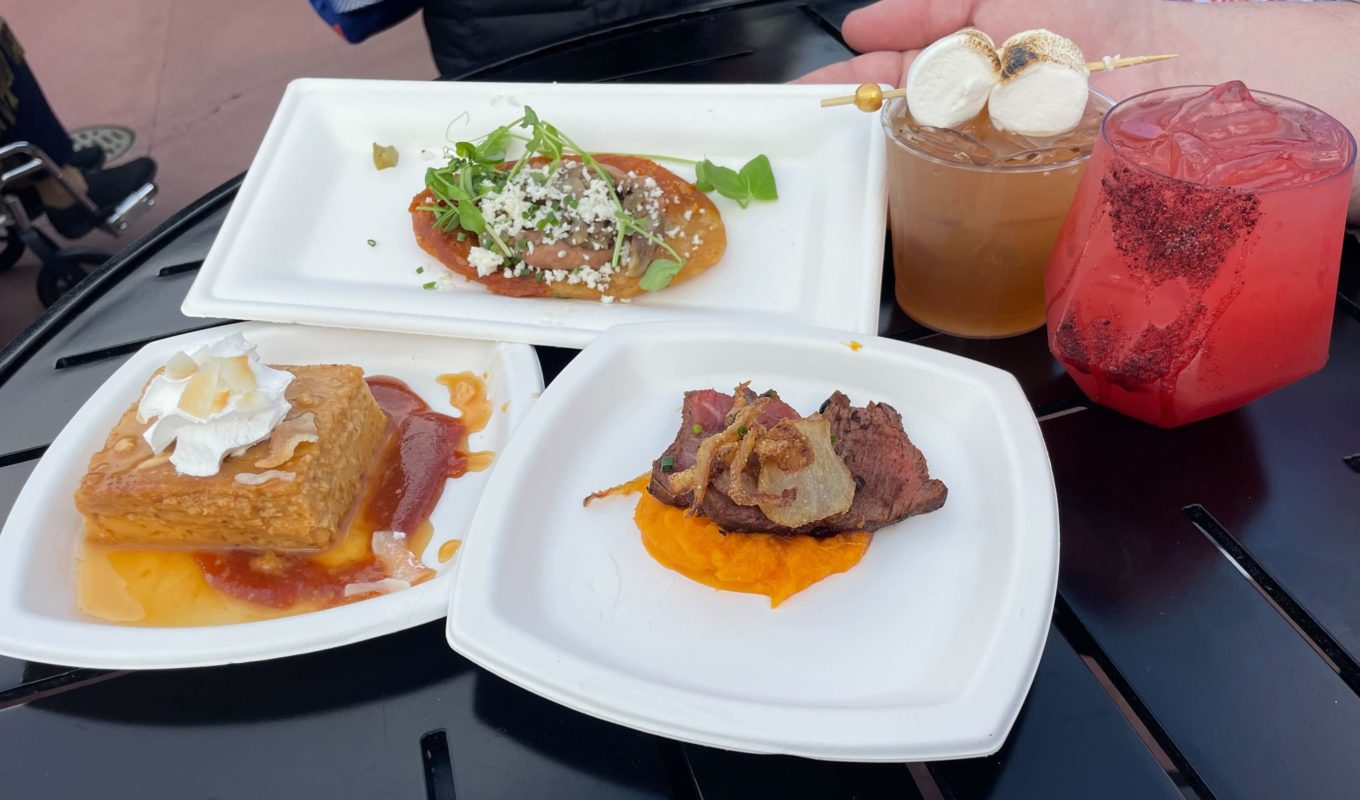 El Artista Hambriento returns at the 2023 EPCOT International Festival of the Arts with an entirely new menu, including two savory dishes, one dessert, and two new cocktails!

While there was a Carne Asada dish last year, this year’s edition sees an all-new preparation and accompaniments, replacing cochinita pibil, pineapple, and pickled onion with sweet potato and crispy onion. Meanwhile, the Cielito Lindo craft beer makes its way to this year’s festival, having previously appeared at Las Posadas Holiday Kitchen during the 2022 EPCOT International Festival of the Holidays.

This was tough to cut with plastic cutlery.

The sweet potato purée was delicious, and pairs well with the crispy fried onions, but the beef is supposed to be the star of the dish, and it let us down. It’s very chewy.

This one isn’t worth your time.

This one is also tough to cut with the plastic knives provided.

It would be a better walking snack where you hold it and eat it since the base is stiff.

Still, it tastes quite good. The flavors from the mushroom and queso fresco come out the most.

This is a solid option. We’d get it again!

This dessert comes in a large portion. The consistency for this is wrong, having the texture of a pumpkin pie rather than a custard-like flan.

The adaptations to make it gluten-friendly ruin this dish. We didn’t get coconut flavor, but again, more of a pumpkin pie taste.

It also feels like it’s over-soaked in water. It’s super liquidy, but in a bad way, not in a moist way. Skip this.

We found this to be very interesting. It’s an IPA, and there are a lot of hops. There’s a strange citrus aftertaste, but after that, we had a hard time getting anything past the hops. It reminded us of the Jai Alai IPA from Cigar City Brewing.

The marshmallows are frozen (as they’re sitting on ice and liquor), but they look toasted. We couldn’t taste a toasted flavor. That being said, they’re also soaked in liquor and delicious.

We didn’t taste any marshmallow in the drink, but there is a smoky flavor in the mezcal.  As can be expected, it’s also a sweet drink, which is decent.

This is easy to drink. It’s not too sweet but in a good way. This can be a dangerous drink because the alcohol is well-mixed.

The strawberry lime puree comes through strongly. We could definitely taste the syrupy mix in the drink, which helps to give it some tang. This is a good pick if you want a cocktail.

El Artista Hambriento is located at number 6, on the map above.

Which of these new menu items was your favorite? Sound off in the comments below!