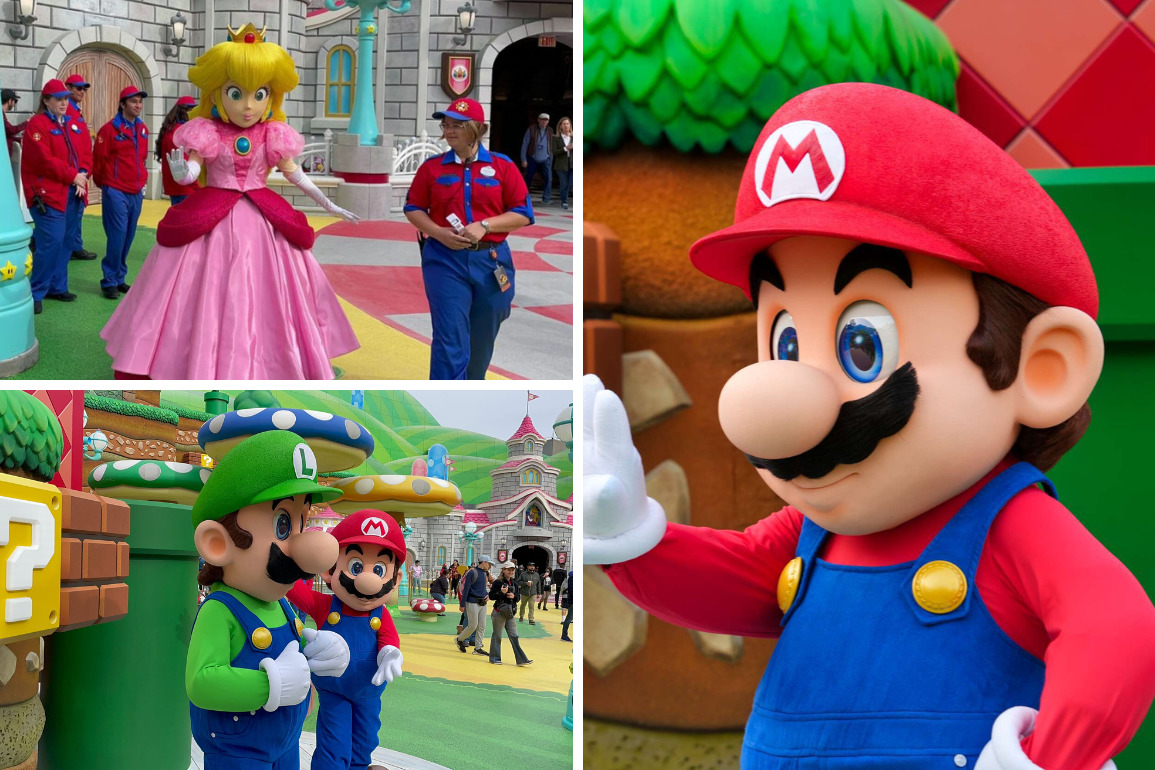 Guests can meet Mario and Luigi, who appear together, and Princess Peach at Super Nintendo World in Universal Studios Hollywood.

Princess Peach meets at a gazebo near her castle. When you enter the Mushroom Kingdom through her castle, the gazebo will be on the right.

The gazebo is closed when Peach isn’t meeting. It’s white with a pink roof and adorned with golden Super Stars. There’s a topiary behind the gazebo dotted with flowers, and more sprout in the planter bed.

The queue stanchions are bronze and topped with hearts wearing crowns.

The princess is flanked by attendees when she emerges to meet her people.

She is dressed in her standard pink gown. It has a magenta bustle and dark pink lace on the bust. The cap sleeves are puffy tulle.

She poses with guests in front of the gazebo.

Watch our video of meeting Princess Peach in Super Nintendo World at Universal Studios Hollywood below.

Mario and Luigi meet in front of the Pirahna Plant on the right side of the photo above.

It’s in the middle of the land, opposite Toadstool Cafe and 1-Up Factory.

The queue stanchions are bronze-colored and the tops are shaped like Mushrooms.

There’s a ? Block here that you can get with your Power Up Band. Note that if you are trying to unlock the achievement for finding all the blocks, you may have to wait in the meet and greet line. The area is blocked off otherwise.

Mario and Luigi come out of the access doors between Princess Peach’s castle and gazebo.

A star-shaped sign will have a digital display with the time of the next appearance. This is unlike Universal Studios Japan, where the two plumbers stay out virtually the entire day, rotating out every 15 to 30 minutes.

Watch our video meeting Mario and Luigi at Super Nintendo World below.

Sadly we still have not seen any sign of Toad coming out to greet guests at Universal Studios Hollywood. He may arrive later, or may remain exclusive to Universal Studios Japan, there’s no way of knowing as of yet.

Super Nintendo World is currently in technical rehearsals, which means it’s not officially open, and there’s no guarantee guests may enter. The land will open for Annual Pass Member previews (which required preregistration) on January 29, and then to the public on February 17.