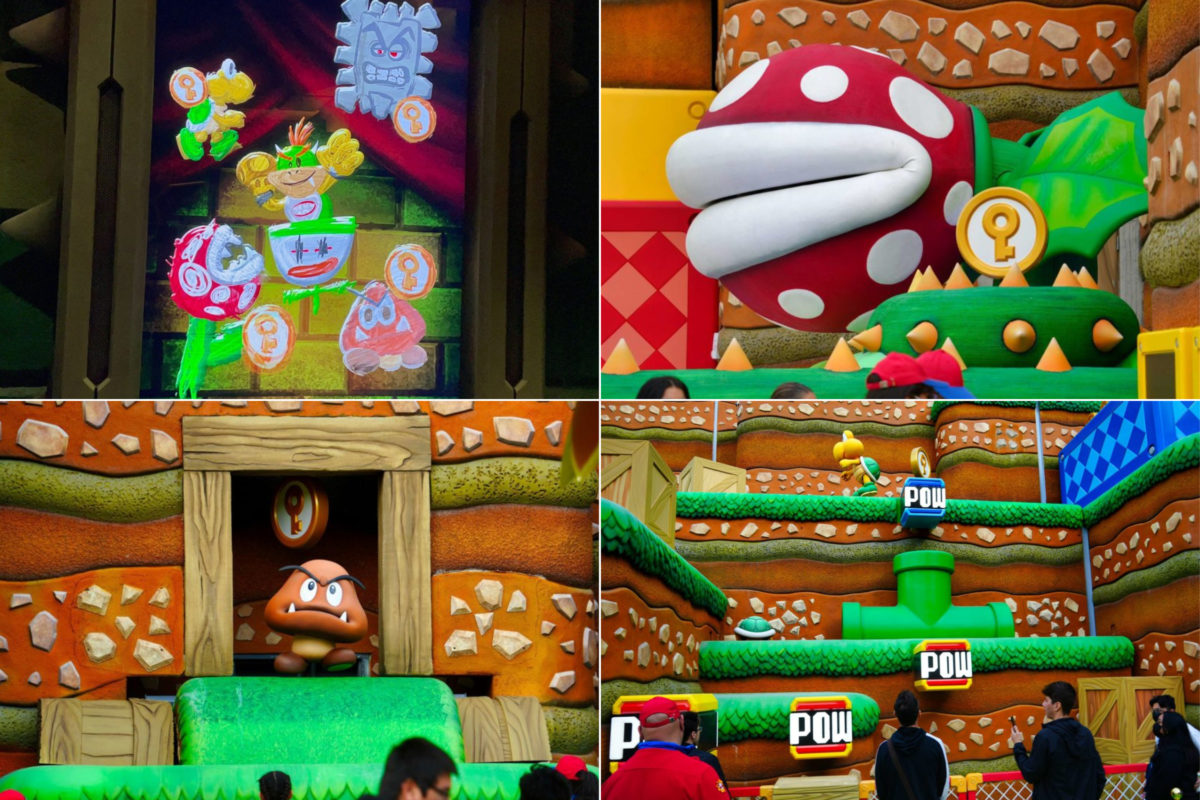 So you’ve got your Power-Up Band, you’ve raced on Mario Kart, now what? Why not try to battle Bowser Jr.? Well to do that, you’ll need three key coins to unlock his lair. How do you get those, you ask? By playing the Key Challenges around Super Nintendo World! And you can learn the basics of each right here! There are four challenges to master, with three required to battle Bowser Jr.

The goal of Koopa Troopa POWer Punch is to time your POW Block punch at just the right moment so a spinning shell bursts through the upper pipe exit, hitting the blue POW Block and receiving your key.

The timing between the three lower blocks activating can be adjusted by Team Members or at random to be as far apart as 1.5 seconds, making timing extremely difficult!

Probably the most straightforward of the games, the goal is to spin a crank as fast as you can to knock the Goomba off. The difficulty scales, requiring you to spin the crank faster and faster, and it can be entirely at random or at the mercy of Team Members, so you can really throw out your arm depending on how fast you have to turn the crank.

Piranha Plant Nap Mishap is definitely a team effort game. The goal of this is to turn off all of the ringing alarm clocks by hitting their tops before Petey Piranha wakes up! The animatronic at the center is actually quite stunning, rising up several feet during the game, and even making slight motions when the game isn’t being played. It’s a fairly wide space, so Team Members generally group Guests together in groups of three or four, even if they’re from different parties.

The clocks flash red and ring loudly during the game when you need to hit them. The blue rubber pad at the top serves as the way to stop the clocks.

Once the ringing stops, the clocks turn white.

Underneath the crashing Thwomp is the next game, hidden in the underground.

After a few switchbacks, we come to this large screen with a key in the middle. Touch it with your Power-Up Band, and the game begins!

This game may be the most difficult of all, the goal is to flip every switch from blue to yellow. But beware, touching one switch can affect others, and you need to get them all to yellow before the Thwomp strikes down and mixes everything up again! Every attempt we made to do this solo ended in failure, only with a team did it work out.

But the guy in front of us managed fine! When you win, all of the blocks turn green and you win your prize — a key coin!

Nestled in the corner of the land is an imposing-looking fortress. One you may only enter if you’ve successfully collected at least three keys and tapped your Power-Up Band.

As it turns out, this fortress is home to none other than Bowser Jr., the rascal son of the king Koopa himself, Bowser! In this statue we see him as he first appeared in Super Mario Sunshine, complete with the Gadd Industries Paintbrush, which transformed him into Shadow Mario in the game.

Paintings around the queue depict the little tyke being pampered by other game enemies like Goombas and Koopa Troopas.

In the main waiting chamber, there’s a small block you can hit if you wear your Power-Up Band. It’ll trigger lighting effects around the room as well as make Bowser Jr.’s laugh resonate throughout the queue.

This this room, covered in graffiti and layered with spikes, we see various items from his evil misadventures, including the Magic Paintbrush, Kamek’s broom, the Junior Clown Car, a Poison Mushroom, a spike ball, and a Mechakoopa.

A screen in the queue shows the Golden Mushroom, which Bowser Jr. has pilfered from Peach’s Castle!

Finally, guests are directed to stand in this room which features video screens that explain Bowser Jr.’s Shadow Showdown.

The station you’re assigned in the game is given here, via numbered tiles on the ground.

The video is intentionally crudely drawn, as if Bowser, Jr. drew it himself to taunt guests.

After the video, the doors open and we see the game room.

You’re instructed to stand on the same number you were assigned for the preshow.

Before the game starts, you can test out the motion sensors by swiping at balloons which float down or are tossed around from other guests.

The first round of gameplay has Bob-Ombs falling toward guests, with guests needing to swipe them towards Bowser, Jr.’s shadow, or to the Koopa Troopas flying nearby. Bullet Bills occasionally soar across the screen, so you need to duck to not be hit!

The second round has guests using the power of the Fire Flower to toss fireballs at Bowser Jr. and his shadows, with enough hits finally ending the game!

At the end you’re given a score assessment and a stamp for your Power-Up Band. You did it!

Which of these challenges was your favorite? Let us know in the comments below! And of course keep an eye out for more Super Nintendo World coverage from Universal Studios Hollywood!

Super Nintendo World is currently in technical rehearsals, which means it’s not officially open, and there’s no guarantee guests may enter. The land will open for Annual Pass Member previews (which required preregistration) on January 29, and then to the public on February 17.