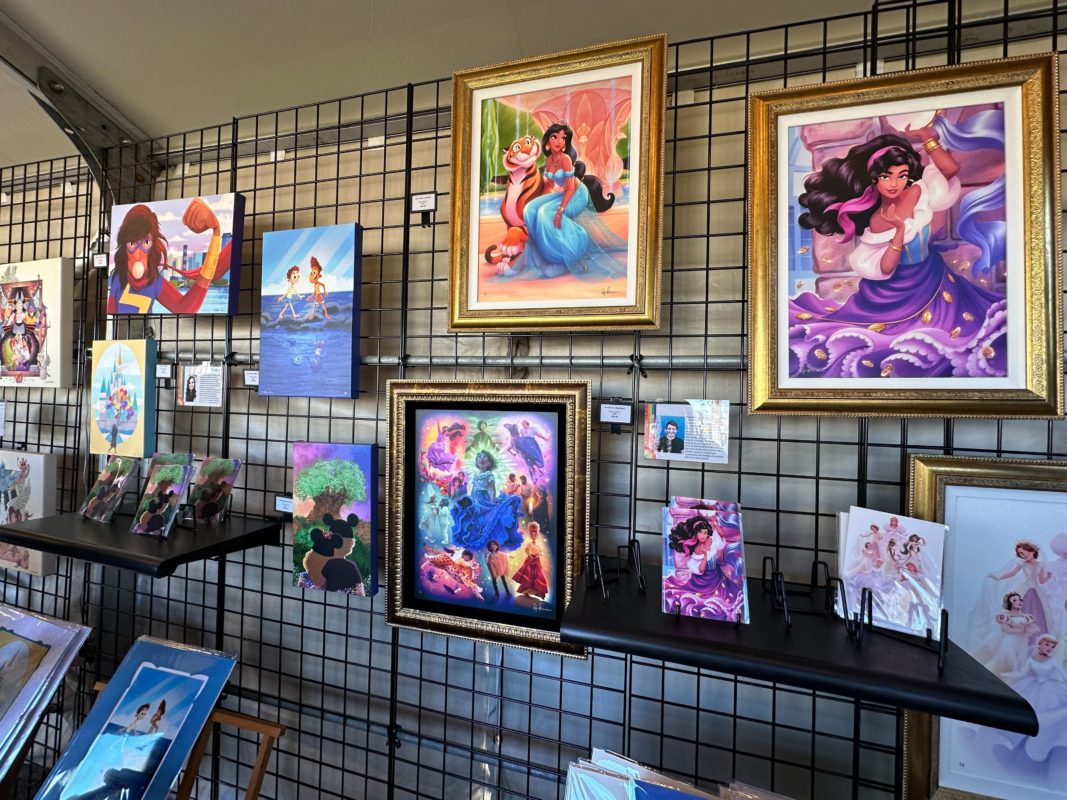 The 2023 EPCOT International Festival of the Arts has begun! Guests can get their magical art fix at the Disney Gallery Artists booth between the France and Morocco Pavilions. Fourteen Disney Artists are displaying their new works of art at this location, while 22 more renowned Disney Artists are stationed near the Odyssey.

Artist John Nadeau may be best known for his Star Wars graphics, but the Disney Artist channels every sci-fi lover’s dream works of art. Star Wars-inspired and other dark fantasy works can be found among his pieces for the 2023 EPCOT International Festival of the Arts.

‘Nautilus in Bloom’ can be seen at the top left and bottom right in the photo above. This original work is available exclusively at the 2023 EPCOT International Festival of the Arts. ‘Headless’ channels some Sleepy Hollow vibes at the Disney Gallery Artists booth in the top center. Just below it, ‘The Bridge’ paints the scene ahead of a dark battle between hero and dragon. On the top right and bottom left, ‘With the Rest of the Garbage’ is on display.

Artist Brett Owens channels Disney animators and background artists of the past. Owens, a Disney Fine artist and graphics designer with Disney Live Entertainment, has been creating art for Disney for nearly a decade. The Texas-based Owens has debuted three new poster-style works of art for the 2023 EPCOT International Festival of the Arts.

The “Hunchback of Notre Dame” classic movie posters seen on the far left of the photo below feature Quasimodo with Victor, Hugo, and Laverne in the forefront. Judge Frollo is in the background, against the towering Notre Dame. Esmeralda and Phoebus embrace in the upper left of the poster. The original graphite sketch is also available.

An ‘Emperor’s New Groove’ classic movie poster can be seen in the top right and bottom center. This work of art was inspired by the poster for “Cleopatra” (1963). It features Kuzco reclining while Pancho, Yzma, and Kronk regard him with varying disapproving expressions.

At the request of fans, Owens has also debuted a “Treasure Planet” piece for this year’s festival. Captain Amelia and Doctor Doppler are in the middle with John Silver looming in the background. In the forefront, Jim is on his solar surfer, reaching out for Morph, who is disguised as the map.

Owens will be available for signings at the booth throughout the first week of February. You can stop by the booth to meet Owens on the following dates and times:

Author and Disney Artist Nidhi Chanani brings four new illustrations to display at the festival this year. Ms. Marvel and Luca are paired with some inspiring pieces that feature guests near Disney Park icons.

At the top, “Good is a Thing You Do” shows Ms. Marvel flexing while blowing a bubble with her chewing gum. Just to the right, “You’re Never Without Me” shows Bruno and Luca discovering their sea monster reflections in the sea below. “Ticket to Believe” shows a small silhouetted girl discovering the magic of the castle while holding onto a sea of multi-colored Mickey Mouse balloons. “I Give My Hope to You” shows a couple cuddling as they look toward the Tree of Life framed by a beautiful sunset.

Chanani will be available for signings at the booth on the following dates and times:

This is Artist Bill Robinson’s debut at the EPCOT International Festival of the Arts. The Disney character designer and illustrator has brought four new works of art to debut at this year’s festival.

‘Spectacular Spooky Spirits’ seen in the top left of the photo above channels the ghostly aberrations of The Haunted Mansion attraction. Robinson’s other works debuting at this year’s festival include “Luke & Grogu,” “‘Change Your Fate”‘ featuring Merida, and “Dancing Upon A Dream” capturing a scene from “Sleeping Beauty.”

Robinson will be available at the booth for signing on the following dates and times:

John Coulter is a former Disney Entertainment cast member with an affinity for costume design. Coulter has been a Disney Fine Artist for more than a decade, using digital design to bring detailed magic to his work of Disney characters.

“The Looking Glass” above shows a perplexed Alice pondering atop a tea cup surrounded by biscuits and butterflies. The scene is captured within an ornate glass and gold display.

Another of Coulter’s popular works, “Fairest Dreams” showcases Snow White resting on a crescent moon among a menagerie of woodland creatures. Suspended in a cloudy sky, green foliage wraps around the curves of the moon while a castle can be seen in the distance.

Coulter will be available for signing on the following dates and times:

Darren Wilson has spent more than 25 years as an artist with The Walt Disney Company. The Disney Creative is a festival favorite each year. This year, Wilson is presenting a number of new works inspired by “Coco,” Disney Villains, “Beauty and the Beast,” and a collection of other Disney characters.

In the top left and bottom right corners, “Forever Villains” showcases a menagerie of Disney’s most wanted evil women. “Mama Coco” shows a loving scene between Miguel and his great-grandmother in the top right. “Disney Afternoon” in the bottom left features a set of some nostalgia-inducing Disney character favorites.

Brian Blackmore has been a Principal Character Artist at Disney for 25 years. Aside from displaying his art and making himself available for signings, Blackmore is also teaching classes throughout the festival that will allow guests to recreate their favorite Disney characters.

In the top left of the photo above, “The Rescuers” paints an elaborate scene of some of the beloved members of the Rescue Aid Society in the 1977 animated film. “Christopher and Pooh” seen to the right shows Christopher Robin and Winnie the Pooh happily snuggled up in a comfy snooze.

To the right of Blackmore’s artwork, new works from Artist Morgan Ditta are displayed. As a Disney Fine Artist, Ditta has worn many hats throughout her career, including her roles as a concept artist, illustrator, and former Imagineer.

“Sweetness Goin’ Around” features Tiana and Lottie from “The Princess and the Frog”. To the far right, “Oswald – Now in Color!” is on display, featuring Oswald the Lucky Rabbit painting on a pair of blue pants while illuminated by a spotlight in the background. This acrylic painting is available as a deluxe print and limited edition canvas wrap, alongside the framed original. The third of four new original works, Ditta displays a very colorful new piece titled “A Rhythm Accordion to Her Own Design.” The work hung on the far right bottom features “Encanto” lead Mirabel playing the accordion. The fourth, “Working Together” features Donald and Goofy.

Disney Artist Dylan Bonner is a freelance illustrator based in Grand Rapids, Michigan.

“The Musical Madrigals” features the entire Madrigal family from “Encanto” in a collage of poses inspired by musical numbers from the 2021 film.

“Ever Afterings” shows seven Disney Princesses wearing wedding dresses. The lineup includes Rapunzel, Giselle, Tiana, Jasmine, Ariel, Cinderella, and Snow White, who wears a white and pink gown that was used in a deleted sequence from “Snow White and the Seven Dwarfs.”

Jasmine also appears in “Not a Prize to be Won,” which shows the princess of Agrabah sitting with her faithful pet tiger Rajah beside a fountain in the palace courtyard.

Finally, for lovers of “The Hunchback of Notre Dame,” there’s “Dance La Esmeralda.” This painting shows Esmeralda dancing surrounded by gold coins, holding her tambourine in the air.

Bonner is available for signings during the following schedule:

Ratner’s previous work has included a glamorous portrait of Jessica Rabbit, which retailed for a whopping $7,000. This year, he offers new pieces featuring Disney and Marvel characters.

“The Floating Lights” depicts a romantic scene between Rapunzel and Flynn Rider as they watch the floating lantern ceremony for the first time. Beside their boat is a display of plants, with the tower she was locked up in looming in the background.

“Hawaiian Holiday” is inspired by the the 1937 animated short of the same name. Minnie Mouse does the hula as Mickey plays a guitar and Donald Duck strums a ukulele. Meanwhile, Pluto, half-buried in the sand, has a close encounter with a crab, while Goofy surfs with ease.

“We’ll Say Hello Again,” inspired by Marvel Studios’ “WandaVision,” shows the Scarlet Witch embracing her full power within the Hex. She floats in front of Vision’s head, as the Mind Stone gleams.

A one-of-a-kind piece, “EPCOT – The Magic of Possibility,” pays tribute to the re-imagining of the 40 year-old park. It features a circle of the pavilion logos above Spaceship Earth, while below, the fountain and a monorail appear above the park’s name. It’s printed on metal and is accented with a high chrome finish frame. The backing inside the frame has a pattern of Spaceship Earth’s tiles.

Ratner’s signing schedule is as follows:

Ashley Taylor’s no stranger to the festival, as her work appeared at WonderGround Gallery last year. This year, she debuts four new pieces at the booth.

“Find Your Way” shows Moana as she holds a conch shell as Hei Hei and Pua stand nearby.

“The Best Day” is another piece inspired by “Tangled.” Here, Rapunzel looks up at her tower as she enjoys her first day out. The work is beautifully framed by lavender flowers and a border.

“I Believe” stars Tinker Bell, working her fairy magic on a string of flowers.

Finally, “Wishing and Hoping” features Cinderella enjoying an early morning moment to dream before beginning her chores. She sits by a fountain, with her faithful dog Bruno by her side.

Artist Daniel Killen recently created artwork for a puzzle celebrating the 25th anniversary of “Hercules“, but his work displayed at the 2023 International Festival of the Arts offers a more modern touch. The fine artist, illustrator, and designer channels ‘The Mandalorian’, ‘Black Panther’, and ‘Peter Pan’ in his collection at this year’s event.

Killen is available for signings on the following schedule:

Thompson, a former Disney animator, is debuting three new pieces during the festival. “True Hero” depicts Hercules and Megara holding hands on Mount Olympus, surrounded by both allies, like Pegasus, Philoctetes, Zeus, and Hera, as well as enemies like Hades, and his henchdemons, Pain and Panic. (Fun fact: Thompson was actually part of the animating crew for Pain and Panic for “Hercules.”)

“Sanctuary” shows Frollo gazing scornfully while Quasimodo and Esmeralda share a moment beneath. Surrounding the cruel judge are Captain Phoebus and Frollo, while the gargoyles and Djali peer in from outside the frame. Thompson noted this had special significance for him, as “The Hunchback of Notre Dame” was the first Disney animated film he worked on.

Finally, take a trip to the world of “The Emperor’s New Groove” with “No Drama Llama.” The piece shows Yzma peering over the cliff where Kuzco, in his llama form, and Pacha, climb their way back up the chasm. In the foreground, Kuzco appears in his human form next to Kronk, who Thompson also helped to bring to life as an animator. All three pieces are available as prints and as a hand-embellished canvas.

Thompson will appear on the following schedule:

Renowned Artist Joel Payne is also on display at the France Pavilion.

With fourteen very unique Disney Fine Artists on display in this location alone, it’s hard to choose a favorite. Which work of art do you think captures your eye or heart most? Let us know in the comments below.