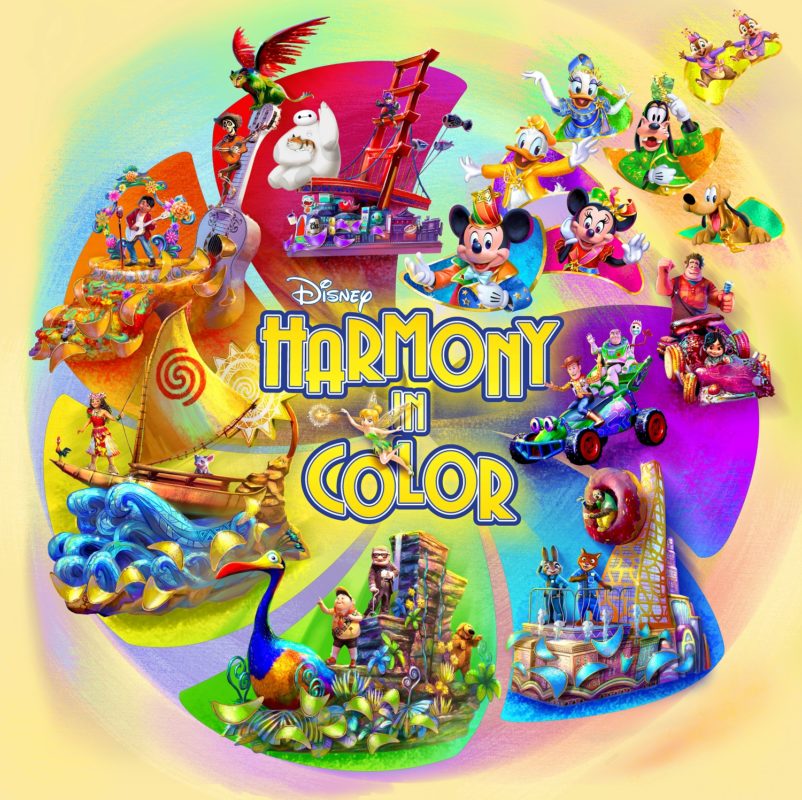 Along with the announcements regarding the 40th Anniversary celebration at Tokyo Disney Resort, we now know about each of the floats in the upcoming “Disney Harmony in Color” parade debuting April 15 at Tokyo Disneyland!

The new art gives us a look at many of the new floats for “Disney Harmony in Color,” which include units for “Zootopia,” “Up,” “Moana,” “Coco,” “Big Hero 6,” and more.

To a World of Colorful Dreams

Dancers in colorful costumes accompany Tinker Bell as she appears atop a float, leading the parade. Her rainbow-colored float is adorned with beautiful petals that seemingly dance in the air, as a colorful Disney world unfolds around her.

Judy Hopps and Nick Wilde, who is now an official police officer, from “Zootopia” make an appearance. Together they set out on exciting new missions, along with their hilarious friend Clawhauser.

Guests will see Russell, Dug and Carl from Pixar’s “Up” set off on a new adventure with the legendary bird Kevin and her babies.

Merida leads her fellow Disney Princesses, Moana, Rapunzel and Pocahontas as they heroically venture to new frontiers, with courage and determination in their hearts.

Guests can enjoy a vibrant tribute to family togetherness with these two floats, each featuring a beloved Disney family. The first float features Miguel, from Pixar’s film “Coco,” as he celebrates a colorful Day of the Dead festival with his relatives. Next up is a “super family,” led by Mr. Incredible from the Pixar film “The Incredibles.” Mrs. Incredible and the whole family also make an appearance while trying to keep a giant baby Jack-Jack out of mischief!

With Your Best Friends

Woody and Buzz Lightyear from Pixar’s “Toy Story” films appear atop RC, the remote control car, followed by Vanellope and Ralph from “Wreck-It Ralph” in her beloved racing car. Furthermore, Hiro and Baymax from “Big Hero 6” make an appearance with the band of heroes — Honey Lemon, Fred, Wasabi and Go Go Tamago, all watching over the city of San Fransokyo. Interestingly, this appears to be almost the same as the “Big Hero 6” unit which disappeared from “Dreaming Up!” last year.

Dreams Come Together in Harmony

In a thrilling finale, Mickey Mouse and Minnie Mouse sporting 40th anniversary attire, accompanied by other delightful Disney friends appear on a beautiful float adorned in a spectrum of sparkling colors. The float’s arrival sets the stage for many more wonderful moments and dreams coming together to create a colorful, harmonious future for all!

“Disney Harmony in Color” debuts April 15 at Tokyo Disneyland, replacing the loved but still-hobbled “Dreaming Up!,” which debuted as part of the 35th Anniversary “Happiest Celebration” in 2018.

Are you excited for the new parade? Let us know in the comments below!