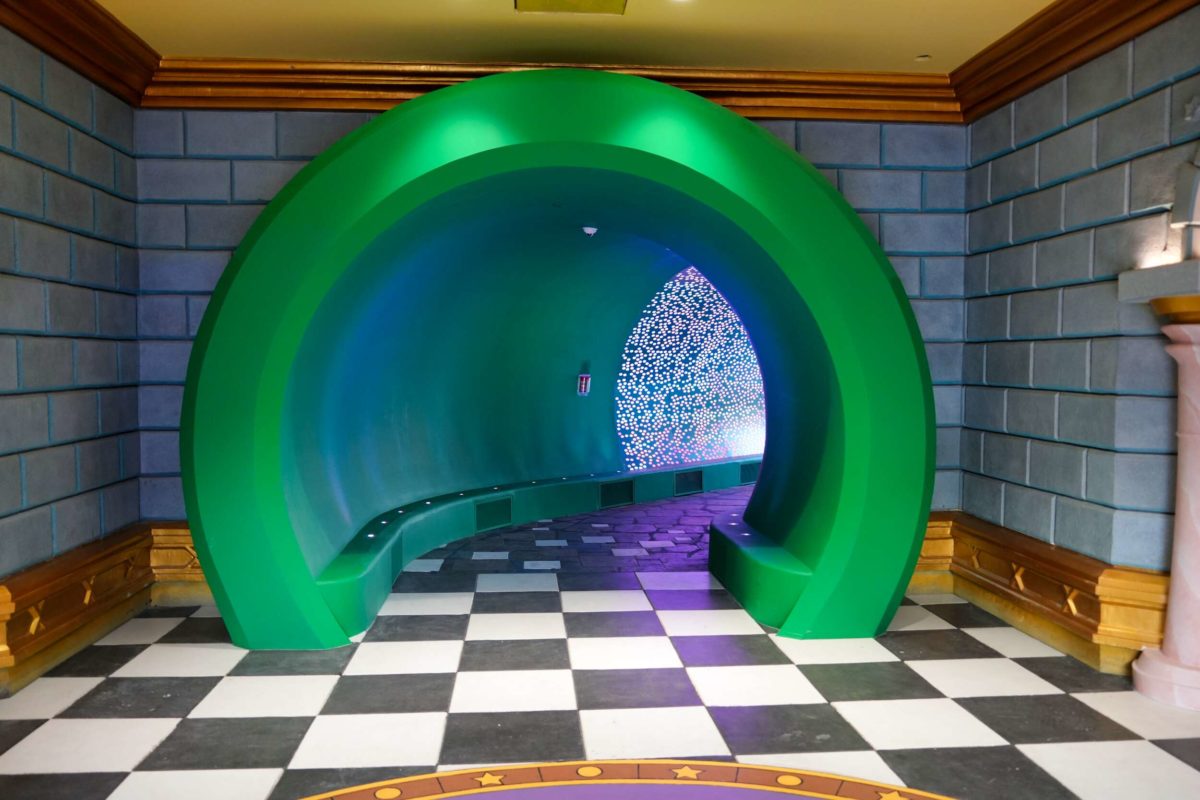 Quiet on set; we’re ready to roll! We headed out to Universal Studios Hollywood today to check out the surprise opening of the long-awaited Super Nintendo World. The land opened for technical rehearsals today, so we hopped in the nearest Warp Pipe we could find to get there. Let’s a-go!

The land is officially in technical rehearsal ahead of some of the larger press events, Team Member previews and Pass Member previews. We were lucky enough to find out about this on the first day of tech rehearsals, and headed down to the Lower Lot as fast as we could.

Along the way, we encountered some new signs for the upcoming “The Super Mario Bros. Movie,” due out in April.

And here it is. Finally. After so many months of waiting and watching from our StarWay vantage point to peek over the walls, we can finally head inside.

The entrance pipe has a beautiful LED field that shifts and changes to make a warp effect.

Coming out of the Warp Pipe, we find ourselves in Princess Peach’s castle.

And what a beauty it is.

This land is amazing. So full of life.

On almost every surface, things are moving. The Piranha Plant sways back and forth.

The coins rotate, waiting to be collected.

And even the stanchions are adorably themed.

Character greetings happen throughout the day, with characters who talk and blink.

Everything feels so alive.

But, of course, we couldn’t wait to hit the land’s one and only attraction. Let’s head in.

*** SPOILER ALERT FOR THE ATTRACTION FROM HERE DOWN ***

The first room is themed to Yoshi’s Story, an N64 game we remember very fondly.

Yoshi eggs can be found scattered around the crayon-drawn landscape of fluffy clouds.

The next room is an underground cavern with crystals, Super Stars and larger, more realistic looking mushrooms.

Then we head upstairs and into Bowser’s Castle.

A statue of the King himself awaits us, probably to scare potential racers away before they hit the track.

All of the different race cups are represented, and the trophies are on display across the queue hallway.

This newest one, the Universal Cup, is what is up for grabs in the ride. Bowser has challenged Mario to a race, and we’re invited to be on their teams.

After moving through the rest of Bowser’s office and trophy room, we head into the factory where Bob-ombs and Bullet Bills are manufactured for the upcoming race.

Then we have two preshow rooms where Lakitu teaches us how to wear the headset and play the game aspect of the ride.

Once aboard the kart, with Mario visor strapped to the rider’s head, some onboard glasses are clipped into the visor for the augmented reality element of the ride.

We encounter various minions of Bowser on the many tracks we blast through.

In the Piranha Plant Slide room, the ride vehicles spin out but regain the traction just in time.

Then diving underwater, we shoot shells at Cheep Cheeps and a giant Maw-Ray.

Back on dry land, we head into Twisted Mansion to battle Boos and Magikoopas.

Then we’re lifted up for a Cloudtop Cruise in the sky.

And at Grumble Volcano, we encounter Bowser’s Airship launching Bullet Bills at us.

The final showdown is with a gigantic Lava Bowser, who is eventually defeated.

The victory lap sends us down the iconic Rainbow Road to race home to the finish line.

And then we pull back into the unload station.

You can see the whole ride and queue for yourself, either with or without AR glasses, right here.

The exit is, of course, through the gift shop. The only shop in the land, 1-Up Factory is your spot for finding that perfect souvenir.

With the guests looking at the merchandise, the looky-loos taking in the decor of the shop, guests in line for checkout and the guests exiting the attraction constantly, this does get rather crowded. Even a slow-ish day like today feels congested in here.

Looking out the pipe from 1-Up Factory, we can see the iconic giant Minion keeping a watchful eye on us even here in the Mushroom Kingdom.

The other main thing to do at Super Nintendo World is interacting with the land itself using a Power-Up Band. These slap bracelets are $40 each and allow guests to activate fun throughout Super Nintendo World. They are available here at 1-Up Factory and at the vending machines next to the Piranha Plant Nap Mishap game.

Here, guests can select their band and have it delivered to the vending slot below the screen.

With a Power Up Band, guests can collect coins by punching ? blocks…

and collect keys by playing games to defeat enemies throughout the land.

Once guests collect three keys, they can enter Bowser Jr.’s Castle to take back the Golden Mushroom that he stole.

All of the activities, achievements, keys and coins are tracked in the companion app inside the existing Universal Studios Hollywood app.

Racing, shopping and playing in the land build up a big appetite, and the land’s only eatery is Toadstool Cafe.

Guests order from the counter, and then are escorted by a host to an assigned table where the food is brought out fresh from the kitchen.

And what a dining room! This is a beautiful place to enjoy a burger or some spaghetti.

We enjoyed sitting on the tiny toadstools scattered throughout the land and just taking it all in.

As the sun set on the first day of public operations for Super Nintendo World, the lights came on and illuminated the land. What was already beautiful in the daytime takes on an even more interesting aesthetic as the colored lights paint the towers and layers of sediment that make up the land. We can’t wait to come back and explore more of the Mushroom Kingdom on future visits.

Lil' Boo Appears in New Decoration at All Hallows Eve Boutique in Universal's Islands of AdventureAugust 22, 2022
Free Button to Be Available for Universal Studios Hollywood Pass Members Starting February 7January 25, 2022
'Halloween in Hollywood' TV Special to Include Behind the Scenes Look at Halloween Horror NightsSeptember 30, 2022