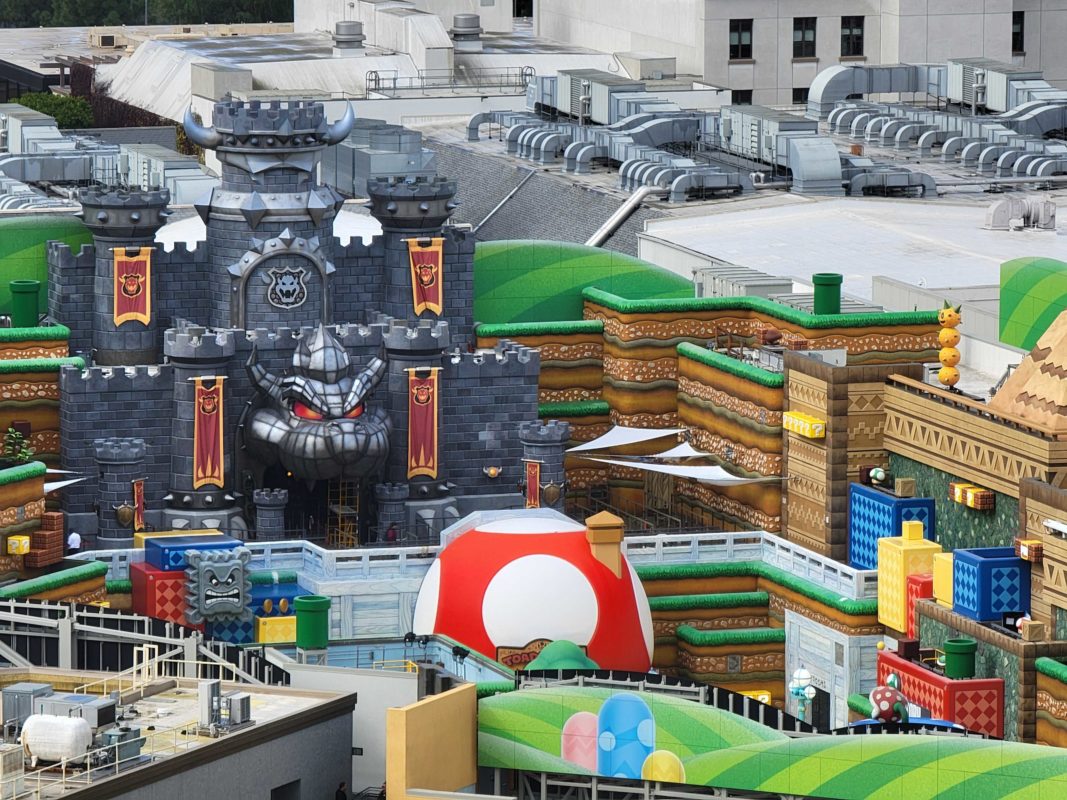 The exterior of Super Nintendo World looks almost complete as we near the land’s scheduled opening next month and Pass Member previews at the end of January (although reservations for Pass Member previews were delayed). In our last construction update, we noted that banners had been hung on Bowser’s Castle and the Toadstool Cafe sign was lit up.

The land is completely enclosed with one warp pipe entrance on the lower lot.

We recently saw the Super Nintendo World sign above the entrance lit up at night. Though a white tarp was sitting above the warp pipe during this visit, construction of the entrance looks complete.

The pipe is painted green, while the blocks behind it are red, blue, and yellow with diamond patterns. A flat hill is to one side. Two black tents were also set up in front of the entrance, possibly for checking in Team Members play testing the land or media previews.

Guests will walk enter into the land through Princess Peach’s Castle, which has pink turrets rising above the flat hills.

Near Princess Peach’s castle, a brown tarp still covered one construction area. The piranha plants, gold coins, and other figures at the top levels of the land will move around, bringing the land to life. We saw this animation testing a few weeks ago.

Though most of the ? blocks visible from above won’t be accessible to guests, some will be interactive via Power-Up Bands. Guests will use the bands in conjunction with the Universal app to get achievements and do the Five Key Challenges, leading to a showdown against Bowser Jr.

Scaffolding has been removed from around the giant sculpted Bowser head at the front of his castle.

Guests will enter Bowser’s Castle to reach Mario Kart: Bowser’s Challenge, the land’s only ride. In Universal Studios Japan, the ride is known as Mario Kart: Koopa’s Challenge. It utilizes AR technology to put guests into a life-size version of the famous video game.

Next to Bowser’s Castle rises Mount Beanpole. Just barely visible in these photos is Yoshi, who will run laps around a tree about half-way up the mount.

We did see Team Members queuing up to playtest the land using Power-Up Bands. One Team Member told us that they tested Mario Kart: Bowser’s Challenge a few weeks ago and it wasn’t yet completed.

The Los Angeles Times recently visited Super Nintendo World, giving us a first look inside, although they were not able to ride Mario Kart. Outside the land, machines have been installed for making reservations for the land. Reservations will only be required the day of if Super Nintendo World reaches capacity.