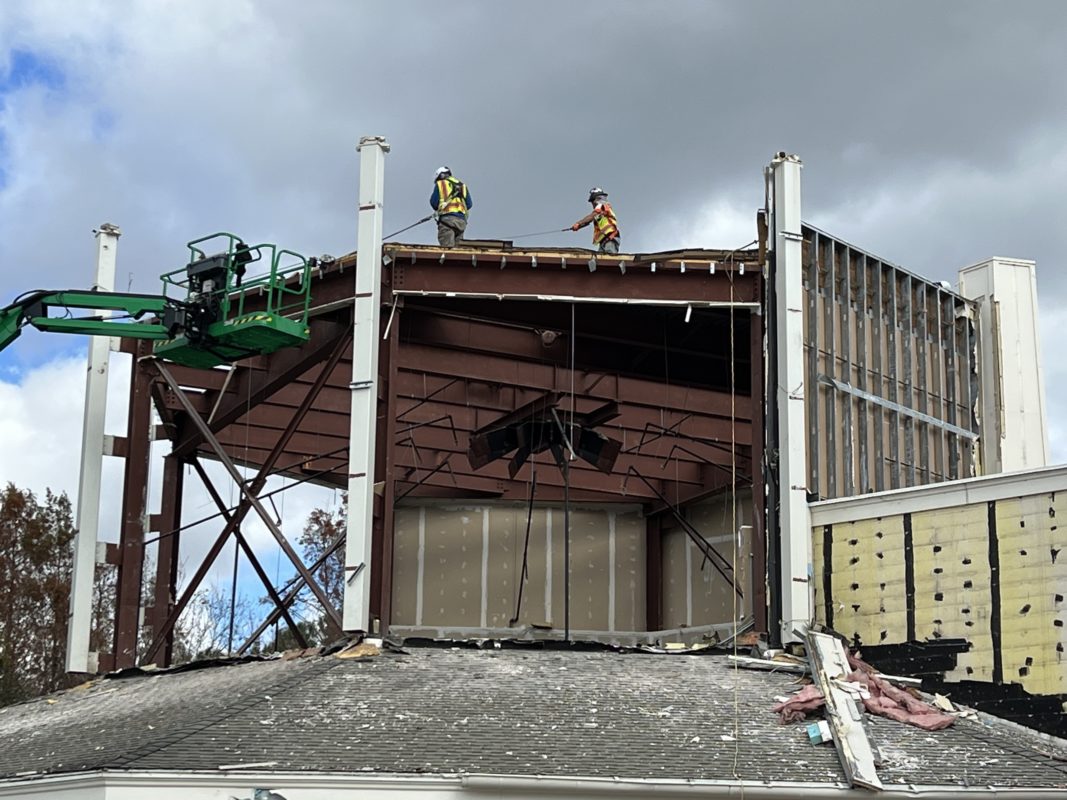 Demolition has moved to the top of the octagonal tower of what was once the ESPN Club at Disney’s BoardWalk and will soon be The Cake Bake Shop by Gwendolyn Rogers. Last month, we saw some of the paneling stripped from the tower.

Most of the tower walls have been removed, leaving just the framework.

Concept art shows windows in the tower, which didn’t exist before.

Crew members were on top of the tower.

They have cut sections out of the ceiling.

Some corrugated paneling remains on the ceiling.

Crews are reaching the roof via a cherry-picker lift.

Inside the tower, we can see that drywall has been removed.

The back walls of the tower, which connect to the rest of the building, remain for now. The exterior paneling of this square has been removed.

Crews have also begun tearing down walls on the front of the building, which will be the entrance to the bakery. A new entrance below the tower will lead to the table-service restaurant.

A white frame remains where the ESPN Club sign used to be.

Some of the wall has been torn away behind the frame.

As we reported last month, the walls of the building below the tower have also been demolished and the interior was gutted.

Rubble sits on the slanted roof.

Lights and speakers are still mounted on the edges of the roof.

From the other side of the building, we could see another cherry picker behind the bakery.

Paneling has also been stripped from the side wall.

Here is the concept art for the exterior. Awnings will hang over the bakery entrance and windows of the restaurant. Planters will border outdoor seating. In general, the building will have many more windows than it did as ESPN Club.

Are you excited for The Cake Bake Shop to open this year? Let us know in the comments below!

Disney Stock Rises Back Above $92