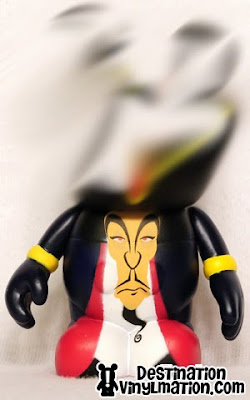 We just want to put the word out and see if anyone else is experiencing the same thing in their local Disney Stores. Usually, Disney likes to print a set for almost a year, and it’s only been half that long at this point in time.

With the announcement of Villains 2 coming, are people buying these up?

What say you, the vinylmation fans?

On 7/12 @faultytext reported, “Villains in Vogue @ DHS was out, as was D-Street Orlando last I checked. I hope they return. Missing some!”

I finished this set last week. I had to purchase them off ebay because my local disney store was completely out. They said they don’t think they will be getting anymore due to the upcoming releases. Glad I finished the set though!

Tampa disney stores are out also. We drive to dwd twice a week and they’ve been out for almost 2 weeks. We need the old hag and were done. Guess I’m scouring mystery boxes.

I have the whole set!! Purchased them individually and just bought a display case for them. I think someone should do a Princess/ Heroine set! I would definitely want that set.

Oh yah. They didn’t have any at D-Street when I went last Friday.

They’ve been sold out in the Bay Area for over a month now.

Still in stock at my Disney store in CT when I was there two weeks ago.

My local Disney Store here in southern NH has been out of Villains for about a week. They don’t expect to get more!

Both Colorado stores have been out for a while now

Disney Store In Hamilton, Ontario is out, too!

In dtd right now (orlando) walked into d street and they have 5 cases barely touched on display. No joke. Someones messin with us

Hmmm, that’s weird! Thanks for letting us know!

Does anyone know the exact location of the chaser in a sealed case of villians 1????