Destination Vinylmation would like to introduce new reporter Lee Byrom as she details her account of the Bonkers release at Downtown Disney Orlando:


In the early morning hours, if you can consider 3:30am the morning, and sans coffee or breakfast I made it out the door, along with my designated vinyl-addict support group, to snag some fast-food on the road in order to bolster ourselves for waiting in line for the Bonkers Disney Afternoon set and maybe even one of the 9″ Animation releases. 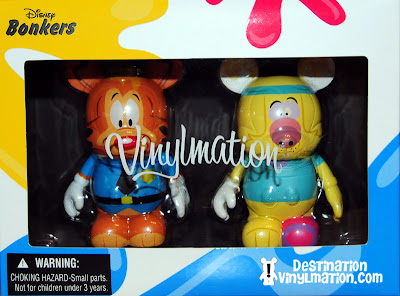 Upon arriving, we saw that Disney property is still ruled off limits by security until the magical hour of 8:00 am (supposedly due to construction vehicles …). I have been to almost every release and we almost always arrive bird eating worm early to the same people, the same place, and relatively the same time. However, as time crept forward those of us waiting patiently in our pre-formed line began to watch as a few newly arrived fans forming a small coup on the other side of the entrance road. Could it be that our eyes were just blurry from the recent infusion of caffeine with quadruple shots of sugar and cream? No, sure enough as the vinyl is addicting, there were a few people who must be allergic to lines, waiting in a cluster on the other side of the road. It wasn’t that there were so many across the street that made people nervous that there would be an outage of the coveted releases; it was just plain ol’ principle of what is obvious to most, if you see a line you wait in it. To make what could turn into a long narrative of what happened short; security fixed the contradicting parking lot lines and falling short of saying “Could have told them so”, the line was effectively reformed where it belonged. 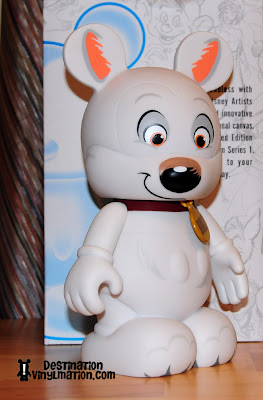 This brings me to wonder if perhaps Disney should be rethinking their plans for these releases. Is the parking lot the best place to have a small horde of vinyl crazy people waiting? Should they dedicate a security officer in the parking lot for these events to monitor and escort the line on property? I think so, and if they are not going to allow the line to form on property, then I feel it is becoming necessary to monitor its formation in the parking lot. If I were ever to bring one of my children to a release I would certainly rather them be waiting on Disney property, away from cars in or near the parking lot. Also, if were to arrive at 4:00 in the morning and have someone arriving at 10am beat me to the second line once on Disney property, I would be cross, no matter how much sugared coffee and greasy bacon and egg muffins I had stuffed into my anxious gullet. 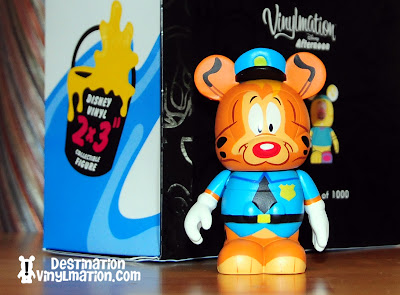 As a FYI, the line we then wait in once on Disney property seems to have been migrated by staff to the other side of the path in front of D-Street. It also appears to me that fewer people were allowed into the store on each wave. However, the big time bonus this time was that Wetzel’s Pretzels handed out refill cups for 99 cent fountain drinks and with your receipt from D-Street they added on a 99 cent pretzel, normally around $3.60! I was completely happy for that, mostly because my high octane caffeine fix had dwindled to a low sounding buzz in my ears and I was in the need of a large soda to keep my wits about me once released, like the starved vinyl addict I am, into the store.

Once we were waved on in a group of six people to replace those who have checked out and happily walking to their cars with their treasures, I grabbed my two Bonkers sets and one Bolt, checked out, and quickly moved outside to admire my purchases. Then it was off to the pin station for my troupe. We gallivanted around Downtown Disney and grabbed lunch together as we were out without husbands and children, which only breeds further money loss. But it was totally worth every penny, especially with anything Disney! 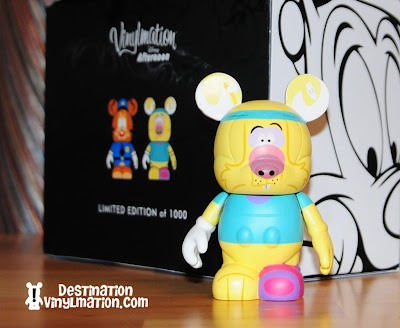 On our way back to load up the car and make our return trip home, we swung back through D-Street and there, on the shelves with little twinkles in their eyes, sat a whole stack of Bonkers. So perhaps this time we did not need to rouse ourselves as early as 3:30 in the morning to make our hour long trip down to wait in a line for five and half hours. However, to us it was five and a half hours spent talking and laughing… not to mention witnessing a few small drama-works.

So, if you are “jonesing” for some newly released vinyl, I totally recommend coming early and joining in the fun of the wait (and the line)! Meeting new collectors and collectors who probably have sections of their homes roped off with display cases crowding the walls is worth it alone. Not to mention, there is no telling what will sell out and what will stick around. For example, at 2:00 pm there were only five Bolts left … and at the release for Rescue Rangers, you would not have been so lucky to find anything left that particular Disney afternoon!

Editors Note: Here are a couple accounts of the Disneyland Bonkers Release:

David on our Facebook: “About 300 people were there, some started lining up as early as 4:00 AM. They only got 90ish of Bolt and Merlin (not like the massive quantities Florida got). The good news was that the staff had the line very organized this time so I applaud them for that.”


SWLady on the Vinylnation Forums: “Here is my report for DLR. Arrived at 6:00 am. Wristbands not handed out until 7:30 am. I got my wristband for Bonkers and the Half Marathon Vinyl around 8:30 am and estimated that I was around the 200th person. 9″ wristbands were already gone. Since there was another line now to get into D-street, I decided to go have breakfast and return later. Got back to D-street around 11:00 am and walked right up to the register to get Bonkers. Had to wait until 12:00 noon to go to the Disneyland hotel to pick up the Half Marathon vinyl. Took about 30 minuites there. Then decided since it was close to 1:00 pm to check out the standby line back at D-street. I was probably the 20th person. Heard there was a few Bonkers and Bolts left and quite a few Merlins left. By the time the next wave of wristbands were handed out, I could only get Merlin. Bolt was very limited today.”

I was one of the people who were standing on the side walk….no one knew there was an “unoffical offical” line in the parking lot….in fact it looked like a bunch of friends sitting around talking….. so we stood on the side walk, because we didnt know the people in the parking lot. I would never personally have cut in front of anyone. Maybe next time you should put up a sign that says the line starts here, as most people dont make it a habbit to butt in to what looks like friends sitting around talking….just an idae :)

There was a clear line, several people were lined up two by two in the lot. Groups of friends don’t stand in a line typically while they chat. Either way, WDW needs to realize the demand on such product and have it a little more organized as far as people waiting in line. A lot of us who have been collectors for a while know the process and have the “proper” event etiquette. Some of the newbies just need to be directed and we understand that! I was witness to someone telling the people in the other section standing around… Read more »

Actually, my husband arrived at 9:30 am and got his set with no problem. We stop by saturday at noon and they still had some more sets behind the counter, we were very surprise, I guess this series was not as popular as the other ones.

See the problem is that most of us who get in line at 4 in the morning have done this multiple times and we like to respect each other and have some kind of humane order to first come first service. Half way through us all realizing that these people were in fact going against what Disney security officers were saying by not standing in the parking lot and skipping those if us who were in line long before, a man who was in the line went over to this other group of people. He asked them if there was… Read more »

I’m thinking of joining the line for Darkwing (which I assume will be bigger then Bonkers). Where in the parking lot does this line form?

Also it’s silly for Disney not to allow the line on sidewalk up to D-Street…It’s ALL Disney Property and it’s for people who want to spend money with them.

Usually the line forms in the parking lot closest to the Dine In Theaters by the handicap parking. It pretty hard to miss as there is normally 15 to 20 people.

Yeah I guess I just didnt know. However it wasnt a “line” when I got there as much as what looked like people sitting in groups. We will know for next time where to stand, however I take slight offense at the tone in this article. I am not “allergic to lines” as stated in the article…when I know a line has been formed. I also was not with the gentleman that got approached, however I saw it the “exchange of words” and it was childish on both sides. The gentleman who aproached could have handled the situation much better… Read more »