Well, the Disney Design group has done it again. Released today were the new Cutesations. As you have seen from Mike’s post from last week, the Cutesations are 5″ plush that are sold in Blind Boxes at the Disney Store. Since I was already in the Disney Store to pick up the new Furry Friends Vinylmation, I opted to purchase a couple of the Alice in Wonderland Cutesations to check them out. 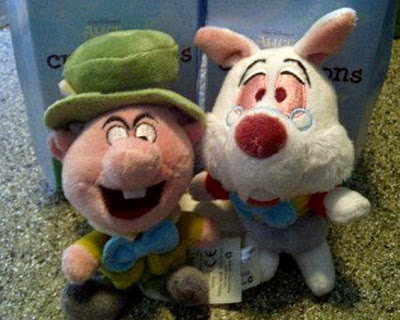 I was not disappointed. They did a really good job on the series. I ended up with the White Rabbit and Mad Hatter, both great designs. They are basically minis of the large plush that are already of good quality. The faces look great and really capture the characters well. The boxes were also nicely done, especially on the inside where there were some nice quotes. The only drawback with the boxes was how difficult they were to open; I was hoping to keep them in good shape, but the glue used to seal them damaged them slightly. The only drawback to the series is the size of the tag: 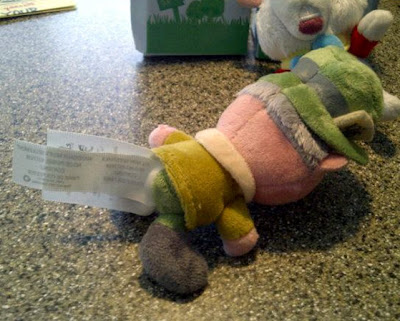 As you can see, the tags are almost as big as the entire figure! I did see the entire set on the mushroom. It was nicely put together but sort of takes away from the fun of buying blind boxes (bloxes…).

Overall, I really like the series. As with Vinylmation, I would buy one or 2 from each series but would not buy an entire set. At a price point of $6.50 each ($7.50 Canadian) they are a good value. I say take the chance and buy a couple to check them out.