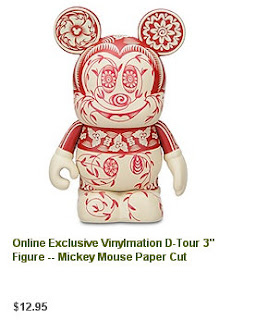 Update: 4/7/12 The “Paper Cut” figure was released on the 6th at D-Streets. The figure was the one were used to know as “Flowers and Vines”.

Update: 1/13/12 D-Tour will be released at D-Streets on Friday, January 20th, 2012. We also now have a look at the rest of the first release of this series. There will be a total of 6 open window figures in the first set.

The Urban series gives much artistic license to the artists, but D-Tour is art all upon itself. This is a new direction for Vinylmation. Taken from tee-shirt designs with different versions of Mickeys, D-Tour looks like an artistic gem of a series. This set will revolved around different designs of Mickey. It will also be different in that they will keep track of inventory and order more hot sellers and replace slow selling designs with brand new designs. They will be in D-Streets in February of 2012 and will retail for $12.95.

Here is some of the artwork these are modeled after: