New Vinyls Were Only An Illusion

Update 7/8/12 These re-releases seem to only have happened at Disney Stores that have already released a city specific figure of their own. (NYC, Chicago, SF, Tokyo, Paris, London, Dublin) Also, thanks to the Playwright in NYC, we know the Global Vinyl was $9.95, but the others will be $12.95.

Thanks to this picture of a poster sent to us by The Playwright that was hanging at the Times Square Disney Store, we get a look at the other 5 “Magic Around the World” Vinylmation that will be released over the next five weeks at Disney Stores. 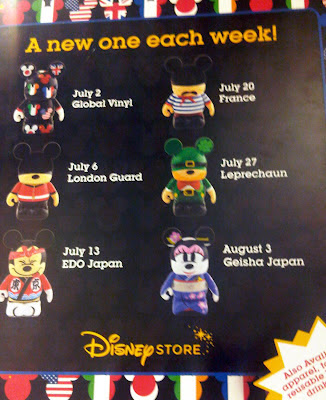 Feeling a sense of deja vu? We were excited to get 5 new Disney Store “world themed” vinyl figures, but instead all this meant was a re-issue of the previously location exclusive figures into other cities. This continues the Disney Store trend of turning “location exclusive” figures into “city specific” figures. They have previously released figures from New York, Chicago or San Francisco online for everyone to buy. I personally enjoy the idea of making some figures hard to get and only available in one city’s stores. So here is the lineup: